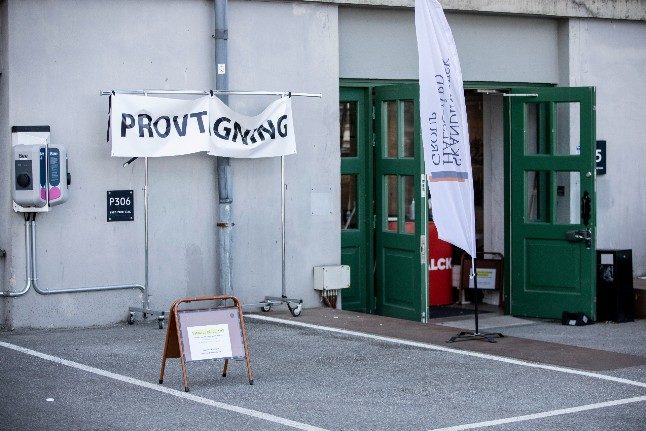 A Covid-19 test centre in Stockholm. Photo: Christine Olsson/TT
Sweden on Thursday set a new Covid-19 record, registering 23,877 cases. This came just two days after the last record was set, with the 17,457 cases recorded on Tuesday. Daily reported cases are now at around double where they were at Sweden’s previous Covid peak on 23 December 2020, when the previous record of 11,376 daily cases was set.
While the number of confirmed cases per capita is extremely high, Sweden is by no means an outlier in Europe, with many other countries reporting higher rates over the past seven days. The high case rates in Sweden have also, so far, not led to a sharp rise in the number of Covid-19 patients being treated in intensive care in Swedish hospitals.
According to the database kept by public broadcaster SVT, which collects information from official sources, there were 834 patients being treated in hospital (but not in intensive care wards) on Thursday. That is up from 610 on January 1st, and up from 485 patients the week before. But it is well below the number the peak of the second wave at around the same time last year, when hospitals had more than 2,600 Covid patients.
The number of daily new admissions to intensive care units is also at more or less the same level reported at the end of December.

According to SVT’s database, there were 106 patients being treated for Covid-19 in intensive care on Saturday, January 8th, 15 fewer than the 121 being treated on January 3rd, and well below the first wave peak of 558 recorded at the end of April in 2020.
Compared to most other European countries, the number of people being treated in hospital for Covid-19 in Sweden remains low, with only Austria, The Netherlands, and Norway reporting a lower per capita hospitalisation rate. When it comes to the number of deaths with Covid-19 over the past seven days, Sweden is in an even better position. In the week running up to and including Friday 7 January, Sweden had the lowest number of confirmed deaths per million people in Europe. This follows a pattern seen since early last year.
By the end of October 2020, Sweden had one of the highest Covid death rates in Europe, behind only Belgium, Spain, the UK, and Italy. But Sweden’s death rate was relatively low throughout the second half of last year, meaning its cumulative Covid-19 death rate over the pandemic is now lower than those of most countries in Europe. When you look at total excess mortality — the cumulative difference between the reported number of deaths since 1 January 2020 and the projected number of deaths for the same period based on previous years — Sweden now has one of the lowest rates in Europe.