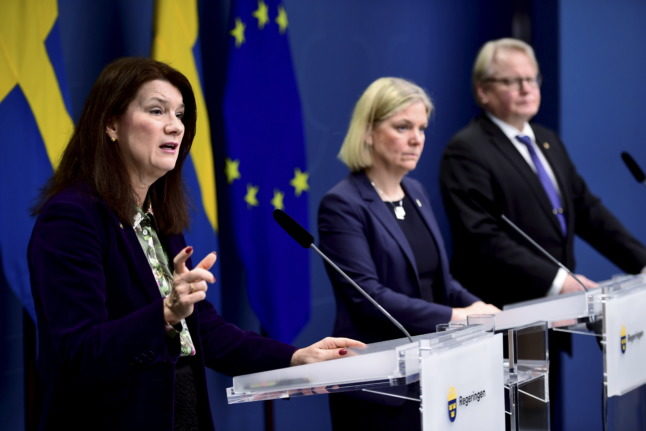 ‘A dark chapter in Europe’s history’

Andersson further described the invasion of Ukraine as “unprovoked, unlawful and indefensible”, stating that it was “a threat to international peace and security, a flagrant breach of international law and the European security order”.

During the day, Andersson will be meeting with the European Council, where an agreement on a new round of sanctions against Russia is expected.

In response to questions at the press conference regarding Sweden potentially joining Nato, the prime minister responded that “in this kind of situation it is important that the security policy set by Sweden a long time ago remains the case. That we are predictable and clear with our security policy. This is not the situation for any kind of wobbliness.”

Foreign Minister Ann Linde described the invasion as “a serious breach of international law” and a “cowardly attack”, further stating that “we are facing the most important security political situation since the Second World War”.

Swedish embassy staff in Ukraine have left the capital Kyiv and have been working from the city of Lviv, near the Polish border, since Wednesday night. The embassy will now move to Poland, said the ministers.

When questioned about how she interpreted Putin’s speech last night, in which he threatened all “outsiders who are considering getting involved: if you do so, you will meet consequences greater than any you have met in history”, Andersson stated that “the entire speech is full of statements which are shocking and which, alongside threatening Ukraine, also threaten the rest of the world and Europe”.

A threat to Sweden

“What Russia wants to do is destroy the Ukrainian state, destroy Ukrainian democracy, collapse the state’s systems, create Russian dominance and supremacy,” he stated at the press conference.

“What is being created now is great human suffering and death,” he continued.

Hultqvist said Russia’s actions were a threat to European security and also a threat against Swedish interests and sovereignty.