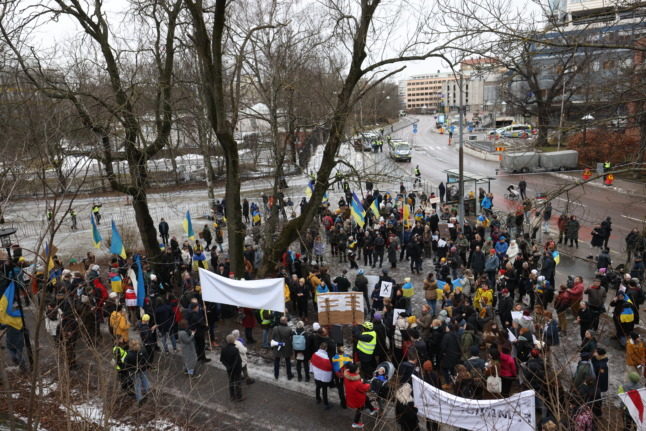 An anti-war demonstration outside the Russian embassy in Stockholm on Thursday. Photo: Fredrik Persson/TT

Sweden’s Coronavirus Commission, the committee tasked with investigating the response to the pandemic by the Swedish government and other authorities, is set to release its final report today at noon.

Their first report, which looked specifically at the handling of the pandemic in the elderly care sector, was presented in December 2020. Their second report was presented in October last year. It highlighted significant failings in Sweden’s testing and tracing process, labelling its initial response to the Covid-19 pandemic “insufficient” and “late”.

The third and final report is expected to discuss whether Sweden’s pandemic strategy was the correct choice for the country, as well as who should be held accountable if not.

To answer these questions, the commission have looked at how Swedish society has been affected on a larger scale, such as public health, Swedish economy and individual finances, as well as a comparison with other countries.

Sweden has halted all deportations to Ukraine on the back of Russia’s invasion and the increasingly violent war in the region, said the Migration Agency late on Thursday.

“There’s ongoing fighting taking place in several parts of Ukraine and there’s a high risk of civilians being affected by violence in the conflict. It’s difficult to get an exact picture of how the situation will develop in both the short and the long term,” said Anna Lindblad, deputy legal director at the Migration Agency, in a statement.

“We need to gather more information before we can make a new assessment of the security situation and the need for protection,” she added.

The Swedish parliament has approved the government’s plan to hand out 7.5 billion kronor to compensate households for record-high electricity bills this winter.

This means that eligible households will get the rebate in March or April.

The compensation will be based on consumption rather than income, with the maximum offered to those using more than 2,000 kWh per month. Households that consume 700-2,000 kWh per month will also be able to get money back, but not as much.

It will be paid out automatically to those who are eligible.

Here’s a full explanation of how much money you can expect to get back.

The Swedish Civil Contingencies Agency’s booklet on how to cope with a potential outbreak of war or crisis has received renewed popularity amid the war in Ukraine.

“If Crisis Or War Comes” is an update of the “If War Comes” booklet last released in the 1980s and first produced during the Second World War. It was distributed to all 4.8 million Swedish households in 2018, following rising tension with Russia at the time.

It details examples of crisis scenarios that could occur in Sweden due to disruptions to IT systems, incidents in the rest of the world, or climate change, explaining how to be best prepared for a possible lack of food, water and communications networks.

Around 1,800 people have now ordered it in the past 24 hours, the Swedish Civil Contingencies Agency told public radio broadcaster P4 Västerbotten on Friday.