Born in London in 1978, Alexander is a classically trained tenor singer with experience studying at, amongst other places, the Royal Northern College of Music in Manchester, England.

As a soloist Alexander has travelled the world, performing in venues from Japan, the White House and all the way to the Amazon rainforest as well as holding leading roles in numerous operas around Europe. Since 2016 Alexander has been based as an operatic tenor at Gothenburg’s Opera.

However, Alexander’s Melodifestivalen appearance doesn’t see him compete on his own, but instead with the group Tenori that he founded back in Manchester.

Since 2003, the group has been one of Alexander’s projects to take his classical training into the opera-pop crossover genre. While the group originally was made of fellow members from the Royal Northern College of Music, today Tenori exists as a duo.

Alexander’s partner is the Swedish tenor Kalle Leander, who will have the lead role of Anatolj in the Helsingborg Arena production of Chess this summer. 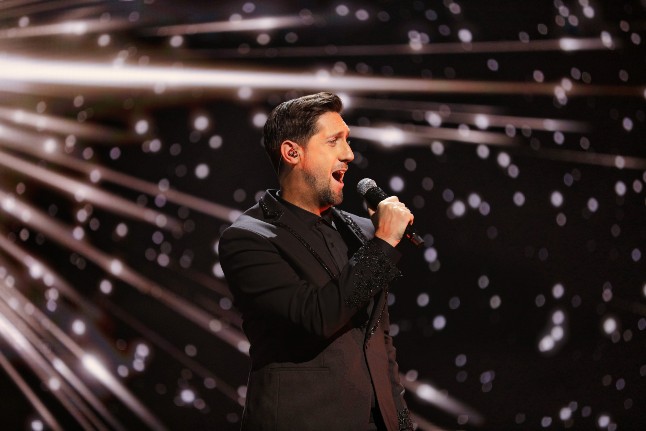 What brought two classically trained singers to the Swedish qualifiers to the Eurovision Song Contest is the song itself.

‘La Stella’ is a product of a team of Swedish songwriters including Bobby Ljunggren, a composer with five Melodifestivalen victories to his name. After being connected to Bobby Ljunggren and listening to various songs it was this one that stuck with the Tenori gentlemen, and they transformed it from the “calm, chilled Mello-pop” as Alexander described it to the crossover number it is today.

Kalle continued, “It was a long journey from the first demo which was nothing like this. Finally, we came up with this hybrid that we felt could actually work for Mello. We put the Italian in it, we put in the harmonies and everyone in the team was happy with the end result.

“This is what Melodifestivalen and Eurovision is all about. It is the massiveness of not holding back. If there is any arena where this should be allowed, it’s this one.”

And as three minutes of Eurovision entertainment, my goodness does the song promise all that Kalle claims. There are hints of James Bond themes in the dark, heavy verses that light up with pastiche Italian choruses – and vocals that knock your socks off.

And to keep the kitsch coming on strong, that oh-so-Eurovision key change has, as Alexander puts it, been “pumped up” – and includes the only pyro curtain in any of the 28 competing Melodifestivalen songs.

“We are in February and March, it is the darkest time of year here in Sweden,” adds Alexander. “When Melodifestivalen comes, it comes with colour, with energy, lights, passion – everybody gives it 120 percent and we’ve tried to do the same. You could say it is kitschy – but it is also Melodifestivalen.”

Signed to Universal, the group are looking to make crossover opera-pop a reality in the Swedish music scene. While die-hard Melodifestivalen fans will be remembering Malena Ernman’s victory in 2009 with her theatrical opera-pop song ‘La Voix’ – thirteen years have passed since with little else existing in this hybrid space both inside and outside the Melodifestivalen circus.

And Tenori forms a group that is a blend of genres. Unsurprisingly, the group has an immense classical repertoire, but their concerts contain opera, pop and film music. Like fellow crossover acts Catherine Jenkins, Russell Watson and Andrea Bocelli, all of whom Alexander names in our interview, the goal of the group is to stretch the boundaries away from what classical singers can do and give that to a broader audience.

And there is no more broad audience than Sweden’s largest entertainment show, and possibly beyond that to the Eurovision Song Contest itself. The group will perform fourth out of the seven acts on Saturday night’s fourth heat.  The top two will qualify directly for the final in two weeks’ time, while the 3rd and 4th placed will qualify for next week’s semi-finals.

You can watch Alexander and Kalle by tuning in to SVT 1 at 20:00, or via streaming service SVTPlay. Viewers based in Sweden will be able to vote for Tenori to the other six acts via telephone (viewers using the higher rate Radiohjälpen number this week will see their donations added to the fund for supporting the people of Ukraine at this time) or via free votes on the Melodifestivalen App.