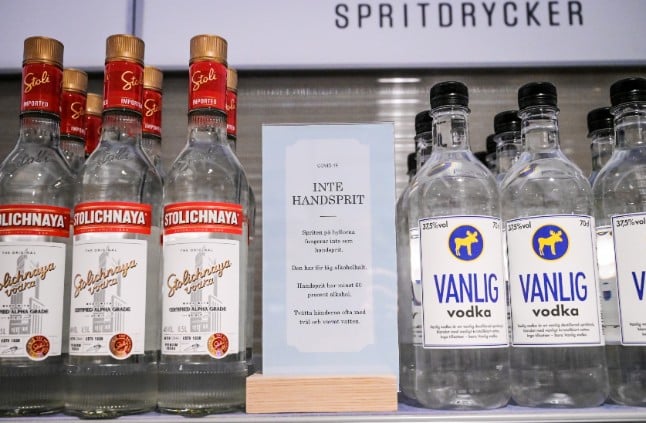 The Russian vodka brand Stolichnaya on sale in a branch of Systembolaget in Sweden. The vodka on the right is not from Russia. Photo: Janerik Henriksson/TT

The decision from Systembolaget, which came only hours after Alko, its Finnish equivalent announced a similar move, will apply with immediate effect.

“Put simply, this is because of Russia’s invasion and that the attack will mean great suffering for the Ukrainian people,” Ulf Sjödin, the company’s Head of Category Management, told the TT newswire. “I wouldn’t say it was a protest, more just a natural consequence.”

In a press statement, the company said that it agreed with Sweden’s government that the attack “violates Ukraine’s territorial integrity and sovereignty”, “will mean great suffering for the Ukrainian people”, and is “a clear crime under international law”.

Systembolaget has three Russian products on its shelves, and 30 more which can be specially ordered.

Sjödin said the two Russian vodka brands together made up less than one percent of the company’s sales of spirits.

He said that the company would resume sales of Russian products if the situation in Ukraine improves.

Alko said that it had taken the decision for similar reasons, adding that consumer demands for Russian-made products had already dropped following the invasion last Thursday.