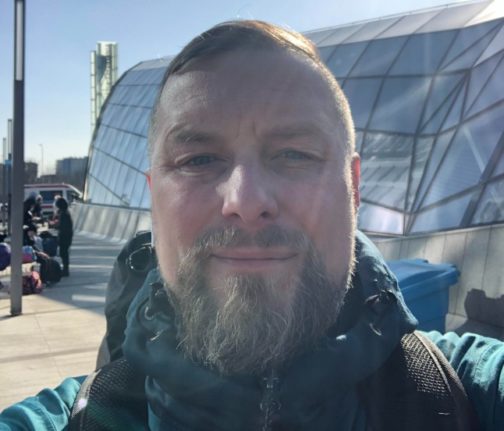 When The Local spoke to Anton Zheleznov on Tuesday afternoon he was already in Warsaw, about to board a train to the Ukrainian border.

“There is an invasion now, and my health, my body: my country needs it,” he said over the phone. “What do you do if your country is invaded? You fight. You protect your country. For me, this is not a question.”

Only a few days ago, Zheleznov, a Ukrainian citizen, was working for a building management company in Södertälje, but as his phone buzzed with news of Russia’s invasion he felt he had to return to his homeland.

His elderly mother lives in the highly exposed city of Kostyantynivka, close to Luhansk and Donetsk, both under the control of pro-Russian separatists. His wife and children, meanwhile, are in Kiev.

“They’ve been for four days and four nights in a car park, without any heating, because there are a lot of bombs and rockets,” he said. “Every time we speak, I feel so worried. I haven’t slept for three days, and I haven’t eaten for two days. ”

Mariia Opanasenko, a former employee of The Local, was at the same time getting a flight to Poland, hoping to reach Przemysl by the evening to meet her parents, who managed to flee from their home in the city of Kharkiv just before the onslaught from Russian troops began.

“It’s just terrible. My mum told me that they got the last train out of Kharkiv,” she said. “She said they heard shootings and bombing and then the train just started to move. It was literally the last moment. They are so lucky that they managed to leave the city. It was the last day before Russia started to bomb.”

She says she has barely been able to sleep as she scrolls through message after message from friends back home describing their situation.

“I still have friends in Kharkiv who didn’t manage to flee anywhere, and now they can’t do it because Russia is just bombing all the time, so they’re staying in shelters. It’s really terrible to start every morning checking in to see if everyone is still alive.”

She said that the defiant stance taken by Kharkiv’s regional governor did not reflect the terror felt by many of her friends.

“He’s doing the right thing, because he has to be strong and to encourage people,” she said. “But of course if you’re in the shelters, and you can’t even go up and take a shower, you’re terrified.”

For Zheleznov, the last days in Sweden were far from pleasant.

Before he left Sweden, he had a payment dispute with the company that employed him, which he claims was run by a Russian man who supported President Vladimir Putin.

For Opanasenko’s parents, the situation is more comfortable.

Her father, a researcher, has long worked part-time for Uppsala University remotely from his home Kharkiv and had anyway agreed to move to Sweden later this year to work on-site for two months. His arrival later will mean simply meaning bringing this forward.

She says that her Russian friends in Sweden have generally been very supportive. “They are in shock. The ones I know of course support Ukraine. I don’t have any pro-Putin friends.”

Even if you accept President Vladimir Putin’s rationale for the attack, the bombing of Kharkiv makes no sense, she says.

“It’s absolutely illogical, even according to his official propaganda. He said he wanted to protect Russians and free Ukraine from Nazis and fascists. But, excuse me, Kharkiv is the  biggest Russian-speaking city in Ukraine, and he’s just destroying it.”

She said her friends and relatives who live in Russia were simply afraid.  “They ask me not to talk about such things over social media,” she said. “A lot of people are really, really scared. They’re scared to protest or even to think about it.”

She said she did not know how she was going to react if she managed to meet her parents on Tuesday evening.

“I can’t even like, imagine, that I’m trying to organise somehow to help them to leave there. It’s so awful,” she said. “I think I’m going to cry.”