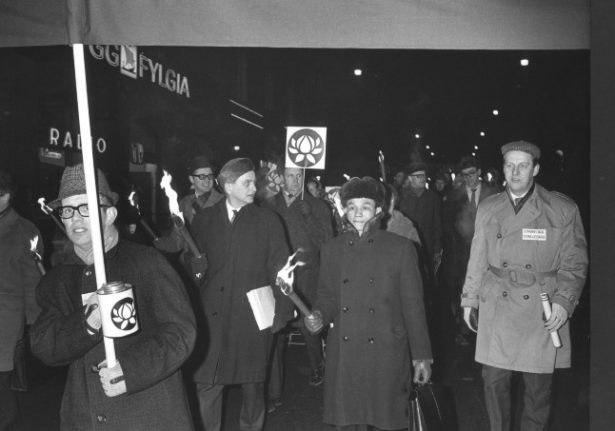 Sweden's former Prime Minister Olof Palme marching side by side with Nguyen Tho Chyan, the ambassador of North Vietnam to Moscow, in 1968. Photo: TT

Sweden has taken an unprecedented stand against Russia, in the midst of an armed conflict in its regional vicinity. What does this mean for Sweden’s historic alliansfrihet and, in the long run, the country’s identity as a neutral force in world politics?

The topic of Sweden’s alliansfrihet (independence from any military alliance), long a point of national pride, is suddenly discussed in high places such as the UN.

The reason, of course, is Russia’s brutal invasion of neighbouring Ukraine.

But why has the stand-alone strategy – the very opposite of NATO’s famous fifth charter, which states that an attack on one is an attack on all – had the support of so many people and political parties in Sweden?

To understand that, one has to look back at our passive (the official term is ”neutral”) stance during World War II, which meant allowing Nazi troops to cross Sweden on their way to occupy our broderland, Norway.

The neutrality policy wasn’t officially abandoned until 2009 (although the wording changed in 1992 after the end of the Cold War, making room for other interpretations). Many international onlookers still regard Sweden as a neutral force in world politics.

There’s even a Wikipedia page dedicated to explaining the difference between yesterday’s neutralitet (neutrality) and today’s alliansfrihet. To someone from a larger, militarized country, the finer points of this may be lost.

There’s also a history of anti-Americanism and a strong peace movement in Sweden, which has seen Nato heavily criticised and in some quarters even met with larger skepticism than oppressive regimes such as Russia, Syria, and China.

But even before Russia’s invasion, we had been seeing a shift in people’s minds.

Our politicians’ frequent bragging about how clever we were to stay out of World War II while Europe burned seems to be regarded as more offensive today than it was a few years ago. A new Infostat survey on societal trust shows that a high number of Swedes mistrust the country’s ability to defend itself.

Despite increased spending in the last couple of years, they’re not wrong.

Sweden scrapped its mandatory conscription in 2010, which means that, if push comes to shove, many young citizens have no idea how to use a weapon. It was only partly reactivated in 2018 to fill the most basic needs.

Svenska Dagbladet reported on Tuesday that our bomb shelters are in such a bad state that it’s doubtful whether they could be used at all.

The Swedish government in 2016 adopted a bill on Memorandum of Understanding on Host Nation Support with Nato. The aim is to ensure that Sweden as a so-called host nation can provide effective support for military activities on our territory in connection with exercises, crises, or military operations.

Sweden had already been a Nato partner for years before that. But the step from participating in exercises with the organisation – playing with the big boys, if you will – to officially joining their club is a major one for a country that’s based a large part of its identity on neutrality.

Who are we, if we enter this alliance?

Not necessarily safer, depending on whom you ask. Many thought Putin’s threats against Nato candidate Ukraine were mere words. Now, its capital is surrounded by Russian tanks, and its civilians bombed.

The Ukrainian population’s willingness to fight for its independence has awed the world but Sweden has not seen war in 200 years and fierce individuality is the societal hallmark, so it is difficult to gauge exactly how strong a resistance the population would mount.

To sum up, we’re not in a good place. We can’t be sure how strongly we would defend ourselves, but we’re also not part of a military club that can.

Sweden wouldn’t last more than a couple of hours against the Russian war machine. Yet we’ve taken a stand against the Kremlin and are suddenly in its sight, like hobbits attracting the eye of Sauron.

Ironically, it may be Russia that’s forcing us into the alliance that up until this moment has always had more Swedes against it than in favour.

And if this was Putin’s plan all along, what might his end game be? World War III? The world has arrived at Sweden’s doorstep, and we probably can’t bury our heads in the sand for that much longer.