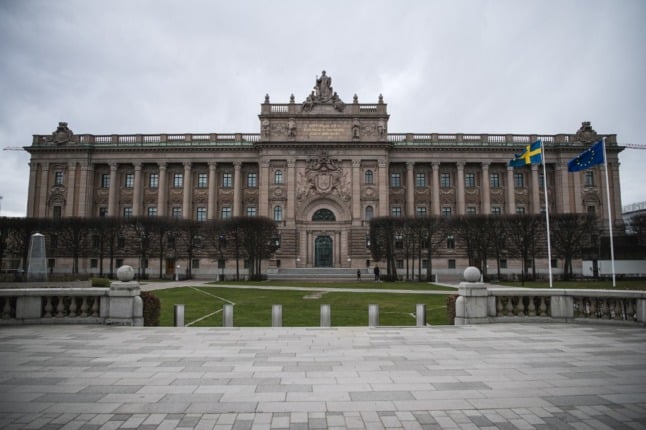 54 of Sweden's 349 Rksdag MPs had stock holdings large enough to have to declare them. Jonathan NACKSTRAND / AFP

More and more people are choosing to invest in shares, according to a review conducted by Swedish news agency TT, with typical stock portfolios including gaming companies, Swedish defence group Saab and tobacco company Swedish Match.

Last year, the bourse saw a 35 percent rise, the largest annual rise since 2009.

Of the country’s 349 elected members of parliament, more and more have chosen to jump on the bandwagon in recent years. TT’s review shows that on March 1st, 54 of the MPs reported a holding that exceeded SEK 94,600 in an individual company, the limit for declaring shareholdings.

The figure can be compared with 43 in March 2020 and 36 in November 2019 when Swedish financial newspaper Dagens industri compiled a similar report.

One of those with the largest holdings, Mattias Bäckström Johansson, of the right-wing populist Sweden Democrats, admits that it may not seem completely unproblematic, but also sees a point in politicians actually owning shares as, according to him, it provides greater knowledge.

“It can be problematic insofar as there may be conflicts of interest, therefore transparency is extremely important and this could be increased further. On the other hand, I am a little surprised that so few members of parliament are shareholders,” he said.

Most of the MPs who have holdings have chosen large Swedish companies, such as Volvo, Investor or Ericsson.

“I personally like their work on a smoke-free future and that they intend to phase out the last smoking products,” Bäckström Johansson said.

Swedish Match announced in 2021 that it wanted to spin off its cigar business after selling its cigarette business in 1999.

Saab in the portfolio

As well as Bäckström Johansson, a couple of other MPs, Tomas Kronståhl (Swedish Social Democratic Party) and Johan Forssell (Swedish Moderate Party), have chosen to invest in various gaming companies.

Forssell points out that it’s important to make one’s own assessment in such sectors.

“In a troubled world, democracies must be able to be defended, we see what is happening in Ukraine. I question the description that it would not be sustainable to invest in, for example, Saab. I follow the company as a shareholder and see no problem investing in Saab. In many ways I am a very proud shareholder in the Swedish defence industry.”

Forssell and Oscar Sjöstedt (Sweden Democrats) are the two MPs with the largest portfolios. Forssell has stated that he has 38 holdings which are worth at least SEK 94,600. In addition to Swedish shares he also holds stakes in Apple, Amazon and Alphabet, among others. The smallest possible value of his portfolio is therefore almost SEK 3.6 million.

“For me, it is an obvious question, we have some of the world’s finest companies in Sweden. Being able to save in them means that you get a greater interest in economic policy and what creates growth. I think this makes me a better member of parliament and that more people should do it,” he said.

Out of all the parliamentary parties, the Moderates have the most shareholders (16), followed by the Sweden Democrats (15) and the Social Democrats (9).

The Left Party and the Green Party each have only one MP on the list of those who have reported holdings.

With holdings in Cloetta and H&M, Sweden Democrats’ leader Jimmie Åkesson is the only party leader who has qualified for declaring his stocks.

However, if there were to be a change of power this autumn and Forssell were to be part of a government, he does not promise that he would sell his shares.

“I follow the rules that the Riksdag set up and will of course do so even if we join the government,” he said.

Asked whether he saw any difference in holding stocks if you’re in power, he said: “It is possible there is a greater risk of non-compliance, but then there are ways to handle it and there are people in the government today who have fund portfolios.”

The board of Swedish Match recommended that its shareholders accept the bid of 106 Swedish kronor per share, nearly 40 percent above its closing share price on Monday, the companies said in separate statements.

Stockholm-based Swedish Match derives more than 65 percent of its revenue from smoke-free products, including chewing tobacco and the Zyn brand of nicotine pouches.

Philip Morris announced in 2016 a long-term goal to stop selling cigarettes and replace them with alternatives that it says are less harmful.

The US company sells cigarette brands such as Marlboro and Chesterfield in 180 markets outside the United States and has invested billions of dollars since 2008 in vapor products, oral nicotine and other “reduced-risk” products.

The group plans to generate at least $1 billion in annual net revenues from nicotine-free products by 2025.

“We are pleased to announce this exciting next step in Philip Morris International’s and Swedish Match’s trajectory toward a smoke-free future,” the US company’s chief executive, Jacek Olczak, said in a statement.

“Underpinned by compelling strategic and financial rationale, this combination would create a global smoke-free champion — strengthened by complementary geographic footprints, commercial capabilities and product portfolios — and open up significant platforms for growth in the US and internationally,” he said.

Swedish Match chairman Conny Karlsson told AFP that the deal was a “good offer” for shareholders.

“It’s great to have the chance to broaden the distribution of our products, which can compete with cigarettes,” Karlsson said.

Swedish Match is also known for making cigars and “snus”, a form of snuff particular to Nordic countries.

The sale of snus, a moist powder tobacco originating from dry snuff, is illegal across the European Union, but Sweden has an exemption. It contains nicotine and comes in teabag-like pouches that are placed under the lip.

In 2012, Swedish Match said an associate to the EU’s then health commissioner had sought a 60-million-euro payment from the company to push for a proposed tobacco law that would lift the snus ban.

The firm filed a complaint with the European Anti-Fraud Office and the health commissioner, John Dalli, resigned from his post.

Dalli appeared in a Maltese court this year on charges of bribery and trading in influence over the lobbying scandal.

Philip Morris, listed on the New York Stock Exchange, was up 0.6 percent to $99.47 in electronic trading before the stock market opened.