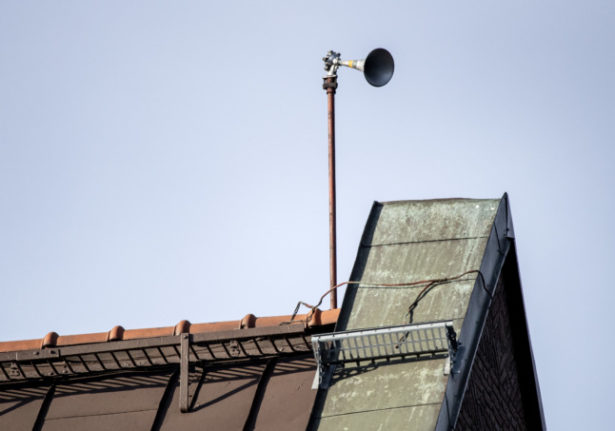 A 'hoarse Fredrik loudspeaker on a rooftop in Södermalm, Stockholm. Photo: Christine Olsson/TT

Likelihood for an attack on Sweden ‘relatively low’

Russia’s military forces are limited and at the moment, the majority of their army are in Ukraine. Military experts believe that an attack on other countries is unlikely at this stage.

“The risk for us is relatively low at the moment,” lieutenant colonel Joakim Paasikivi told TT.

After Russia’s invasion of Ukraine, Micael Bydén, Supreme Commander of the Swedish Armed Forces warned of an increased threat to Sweden and encouraged people living in Sweden to prepare themselves for the fact that the world has changed. Many Swedish residents have begun prepping and public interest in shelters has increased.

However, there is currently no imminent risk to Sweden. The government have not issued a state of heightened preparedness, which they would do if there was a danger of war breaking out.

According to Christiansson, around 100 to 115 battalions are currently in Ukraine, which encompasses around 75 percent of the active serving Russian army.

In the shadow of war in Ukraine and economic uncertainty, property prices continued to increase in February. However, experts believe that we will see a dip in this upwards curve soon due to war uncertainty and rising energy prices.

The increase is across the board, with prices increasing in all of Sweden’s three major cities (Stockholm, Malmö and Gothenburg) for both houses and apartments. In central Stockholm, prices have increased by two percent, a new record.

“Despite the serious situation in the world, negative stock market developments and increased uncertainty in interest rates, the property market is going against the current. A good job market, continued low interest rates and a large underlying need to relocate is contributing towards stability,” Björn Wellhagen, CEO of the Association of Swedish Real Estate Agents, said in a press statement.

Claudia Wörmann, property economist at SBAB Bank, said she would be surprised if there wasn’t a dip in the upwards curve next time statistics are presented in March: “Ther’s a month’s delay. You buy a property because something happens in the family, like you have a new addition or you get divorced. That is still happening. But the discussions about high interest rates and increases in energy prices will have an effect.”

Many municipalities without ‘hoarse Fredrik’

The warning system often referred to as “hoarse Fredrik”, tested on the first Monday in March, June, September and December at 3pm sharp, does not cover the whole country.

Across Sweden, 577 warning alarms are deactivated, and the Swedish Civil Contingencies Agency (MSB) is now asking the government for funds to reinstate the alarms – a process which is expected to take up to three years, Aftonbladet reports.

“Of course it’s a problem, because of the logistics required, and we don’t have an unlimited amount of technicians who can fix them into place,” Anders Johannesson, head of department at MSB told the newspaper.

According to SVT News, 50 municipalites across the country do not have a “hoarse Fredrik” warning system.

“The reason why multiple municipalities don’t have a warning system is because there is no potential threat of an air attack there,” Håkan Marcusson, system architect at MSB told SVT.

MSB have a map on their website showing the location of every warning system in Sweden.