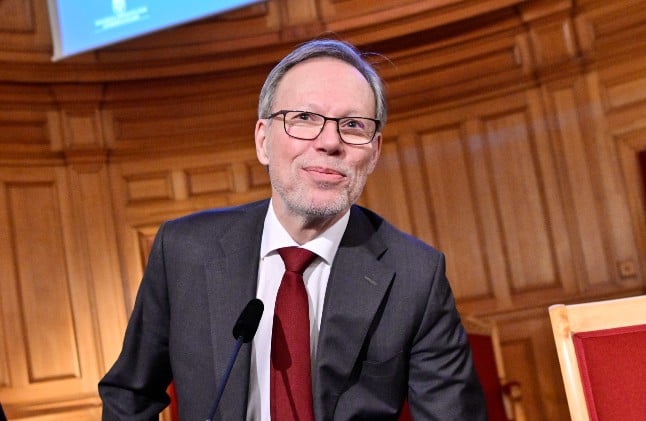 The chair of the Coronavirus Commission, Mats Melin, submits his final report at the end of February. Photo. TT

Mats Melin, the former judge who led Sweden’s Corona Commission, told The Local that Johan Carlson and Anders Tegnell, respectively director general and state epidemiologist at the Swedish Public Health Agency, had stuck to a strategy developed to combat a flu pandemic, and had failed to adjust it even as they saw other countries’ public health authorities take a different approach.

“It was like generals fighting the last war,” he said. “They were fundamentally relying on science and, in Swedish, beprövad erfarenhet — proven prior experience. And for this virus, there was no science and prior experience at hand. It was at hand for the flu virus, and that helps to understand why they relied on old knowledge and did not realise: ‘this is something new, we need to take another approach’.”

According to Melin, this led the pair and their supporting experts to make assumptions about the virus that turned out to be catastrophic misjudgements.

“They fundamentally believed, at least in March and into April at least, that most people would get only very mild symptoms. And that they would recover after a few days or weeks,” he said.

“Of course, they realised, and that was very clear, that the elderly were particularly vulnerable,” he continued. “The problem, in our assessment, is that there was no plan in place for how to protect the particular vulnerable, and thus, the assumption that you did not actually need to take intrusive measures to limit the general spread of the virus was fundamentally wrong.”

In its final report, published at the end of last month, Melin’s Corona Commission concluded that the Swedish authorities’ decision to rely primarily on voluntary measures and recommendations had been largely correct.

But Melin told The Local that he believed that the authorities should have temporarily put this principle aside at the start of the pandemic and followed the example of Denmark and Norway, who temporarily closed down shops, pubs, restaurants, sports facilities and other places where people meet indoors.

The only measure other Nordic countries took that Sweden was right to avoid, he argues, was the decision to close schools.

“Our impression, having spoken to experts is that, had we been able to slow down the spread of the pandemic in the initial phase, then the spread of the virus into the care homes for the elderly, would also have been slowed down. And that, we are convinced, would have saved at least some lives in the spring of 2020.”

Melin said that in the early stages, the Public Health Agency had seen a certain level of spread of the virus was unavoidable.

“We are not claiming that the Public Health Agency deliberately abstained from any possible measures in order to achieve immunity among the population,” he said. “But our firm impression is that they found the wide spread of the virus to be practically unavoidable, and that we would have a large immunity later on, which was fundamentally a good thing.”

But for Melin, the chief responsibility for Sweden’s failures during the pandemic lies with the then Prime Minister, Stefan Löfven, who, he believes, should have intervened in March and April, when he saw that the approach being taken by the Public Health Agency differed so much from those being taken by other countries in Europe.

“The reluctance of the government to take the lead in a large crisis that involved large segments of society, that was what surprised me the most,” he said of his nearly two-year inquiry.

“The Prime Minister has a special role to play in giving instructions to the cabinet, and thus, the Prime Minister bears personal responsibility for not ordering or taking initiatives in spring of 2020 to order, or give directives, to the Public Health Agency to change its course.”

He rejected the argument that Sweden’s system – which combined relatively streamlined ministries, with powerful, semi-independent agencies – had prevented Löfven from doing this.

“Under the Swedish system, the government has some has more difficulties in actually leading than in other constitutional systems. That is true. But we say that those difficulties could have been overcome. The government could very well, in March 2020, have ordered the Public Health Agency to change its fundamental course in fighting the pandemic.”

He said that until around October 2020, the government had made shockingly little effort to consult experts critical of the Public Health Agency’s approach.

“During the first wave, they relied heavily, and almost exclusively, on the advice given by the Public Health Authority,” he said.

The efforts that were made to seek outside advice were wholly inadequate, he argued.

“They made some, almost private, outreach to scientists to get advice from outside sources, there were some initiatives, both from within the Department for Health, and even more so from within the Minister for Finance, but those were very odd, very few and not systematic at all. We conclude that the government should, early on, have reached out and tried to improve its own ability to evaluate advice given by its expert authority.”

Even though, Melin believes the government should have overcome any structural barriers and assumed a leadership role, he said that Sweden’s government still needed reform to make it perform better in future crises.

It was wrong, he said, to have a Public Health Agency which was itself tasked with weighing up the actions necessary to control a pandemic against other public health concerns.

“The [Public Health Agency’s] director general needs to make that evaluation before advising the government on what to do to combat the virus, and that is not a good order of things,” Melin said.

He also called for reforms giving the government and Prime Minister a greater role in peacetime crises.

“We need to organise a structure that enables the government more clearly to take a leading role in a health crisis or any other crisis,” he said. “We need to change the constitution to make it possible in a very severe peacetime crisis for the government to take certain decisions that otherwise need to be taken by Parliament.”

Asked whether his three reports would change anything, or whether they, like so many other enquiries in Sweden, would simply be left to gather dust, Melin said he believed actions needed to be taken.

“I certainly hope so. Anything else would be almost unthinkable,” he said. “The standpoint of many experts, not least the World Health Organisation, is that this was really a sort of general rehearsal before the next, more severe, pandemic will hit the world.”

“So from that perspective, it is of fundamental importance to learn from this experience and be better prepared next time.”