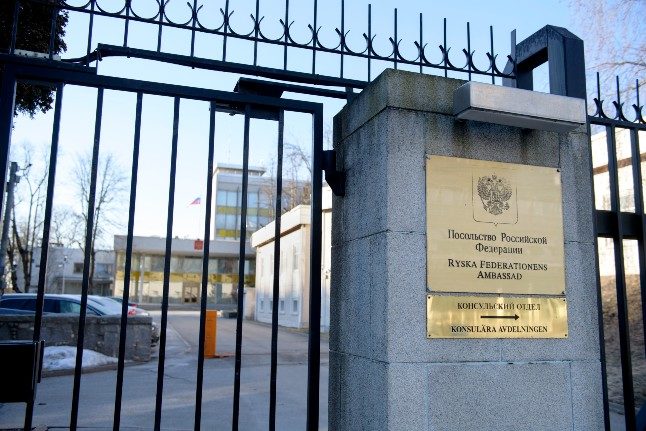 Gjörwellsgatan, the street where Russia's embassy is based might be named after Volodymyr Zelensky. Photo: Jessica Gow/TT

The youth wing of Sweden’s Christian Democrat party, among others, have called for the street to be rechristened Zelenskygatan (“Zelensky Street”), after the Ukrainian president, Volodymyr Zelensky. The youth wing of the Liberal Party, meanwhile, has called for it to be named Boris Nemtsovs gata, after the Russian regime critic who was shot dead in broad daylight in Moscow, back in 2015.

“The street naming committee is meeting on Monday for [one of its] regular meeting, and we are then going to discuss all the fantastic proposals which have come in,” Joakim Larsson, the city councillor in charge of urban planning, told Sweden’s TV4 broadcaster.

Stockholm is one of a growing list of European capitals that is changing, or considering changing, the names of streets around their local Russian embassies.

In the Lithuanian capital of Vilnius, the street leading up to the Russian Embassy has already been named “Ukrainian Heroes Street”, while in Riga in neighbouring Latvia, the street outside the embassy will be renamed “Ukraine Independence Street”.

In Tirana, capital of Albania, the street outside the Russian Embassy is to be named “Free Ukraine”.

Rasmus Jonlund, from the Liberal party, who is chairman of the district committee in Kungsholmen, where the embassy is based, told the Mitti Stockholm newspaper that he supported the idea.

“You should not underestimate the importance of symbols. It is important to make a clear statement against this crazy dictator. This is a good proposal I support,” he said.

He pointed out that Gjörwellsgatan was anyway a street name that people struggled with.

“There is nothing wrong with the architect Gjörwell, from whom the street got its name. But the street is quite difficult to spell and not everyone knows how to pronounce it.”