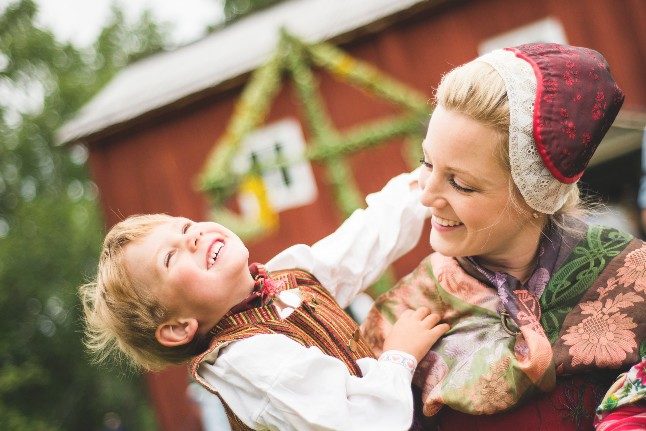 A friend visited recently, his first time in Sweden. After a day in town, he exclaimed: “I’ve never seen so many blonds!”

There was one small problem: Swedes are not blond. (You read it here first.) Ask any hairdresser. Swedes generally have mousy hair (råttfärgat), they will say. Hairdressers in Sweden spend a lot of time dying their clients blond.

The hairdressers are right. As long ago as 1926, a survey of 43,000 Swedish conscripts found that only 7 percent were blond, while 63 percent had light-brown hair.

So why did my friend see so many blonds? He was suffering from “confirmation bias” – the tendency to interpret the world in a way that supports our existing assumptions. We have a stereotype of what Swedes look like, so we come to Sweden expecting to see blond people. When we see one, we think: “There we are, just as I expected.”

Swedes know that foreigners have stereotypes about Swedes. If you haven’t seen the hilarious video that SVT (Swedish Television) made for the 2013 Eurovision in Malmö, do so now, it will make your day. It is a delightful send-up of Swedishness.

But the stereotypes it plays on have a tenuous relationship to reality. For example, in the film, Sweden is invaded (which is rather topical right now), but the army’s commander-in-chief is off on paternity leave – making the point that Sweden is seen as a gender-equal society.

Yet this is a country where women still do twice as much housework as men, and the lion’s share of childcare. Stress levels among Swedish women go up when they come home from work in anticipation of everything they have to do, while men’s goes down.

Back to the SVT video. When the Swedish army comes under attack, the soldiers start a group discussion instead of taking orders – Sweden is such a flat, non-hierarchical society, you see. Certainly, decades of strong trade unions have left their mark on workplace relations in Sweden and may have contributed to a more democratic workplace culture. IKEA’s founder, the late Ingvar Kamprad, famously championed “humbleness” at work.

But the picture painted by Johan Stenebo in his best-selling The Truth About IKEA is rather different. In reality, Stenebo claimed, during the 20 years he worked there, the company was more like a secretive dictatorship run by Kamprad with an iron fist, helped by a network of internal spies who informed on disloyal managers. Nothing to do with Kamprad’s well-documented sympathies for the Nazis, of course.

Often it is people who are new to Sweden who are the most interested in finding out what Swedishness is. We want to fit in, we want to be accepted by the natives.

Keen to learn about his homeland, Qaisar Mahmood, a Swede of Pakistani heritage, set out on his motorbike to investigate. Several months and 900km later, he could find no common denominator connecting all the various people he had met. Swedishness was like an onion, with different layers but no kernel. “People in Sweden are more different than alike,” he concluded.

But despite their obvious differences, Mahmood found that Swedes did share an image of how they felt they ought to be, a set of boxes that must be ticked to be considered a “real Svensson”. Swedes felt they should be tall, blue-eyed and blond, reserved, trustworthy, and rational.

If there is one thing that does unite all Swedes, it is not just they are all different, but that these differences are rapidly getting bigger. If we surveyed the hair colour of young Swedes today, like the race biologists did back in 1926, we would get a very different result.

Since then, light-brown Swedish hair has been mixed with darker shades from all over the world. Thanks to high levels of immigration, one in 10 Swedes now has parents from different countries. That’s almost one million people.

This number can only get bigger. There are no statistics, but in terms of mixed relationships or marriages Sweden is becoming one of the most ethnically heterogeneous societies in the world, a Nordic melting pot like New York in the early 1900s.

So a typical Swede today is very different from the prevailing notions, and what might be typical today, won’t be so in 10 years’ time. This is a dynamic, exciting society where the only constant is change.

But whatever we think Swedes and Swedishness are, a great amount of effort goes into maintaining our existing perceptions of them.

“Brand Sweden” is the official strategy to market Sweden abroad, developed by the Swedish Institute with Business Sweden, Visit Sweden and the Foreign Ministry. It includes a visual identity of ”calm, mild and light shades of green, grey, blue and beige”, materials such as reindeer hide, birch wood and linen, and “little but essential things that set the mood — flowers, candlesticks, tablecloths”.

This deliberate branding of the country filters back into our perceptions of it and its people. Minimalist, calm, sophisticated, prosperous, obsessed with design, socially conscious, reserved, modern, and just a little bit exotic.

Out there beyond your front door, actually existing Swedes are fairly obviously not like this. Do we secretly wish they were more like the branding?

David Crouch is the author of Almost Perfekt: How Sweden Works and What Can We Learn From It. He is a former Financial Times news editor and now a lecturer in journalism at Gothenburg University.

As thousands of Ukrainian refugees began to arrive in Sweden following the invasion by Russia, the headline of a recent opinion piece by the leader of Sweden’s far-right, anti-immigrant Sweden Democrat party spoke volumes: ‘There is a Difference Between Refugees and “Refugees”’

For Åkesson and his nationalist supporters, Ukrainian refugees are “real” refugees. They are from ”a Christian country with a culture that is more closely related” to that of Sweden, while refugees who escaped Syria and Afghanistan were framed as being made up of millions of backward, poorly-educated “professional migrants” (his term) devoid of European values and sensibilities.

With this backdrop, recent comments posted on Twitter by a municipal council member in Sweden’s second-largest city, Gothenburg, provided a disturbing insight into how politicians, not only the far-right but on all sides of the political spectrum, use different sets of standards when considering Ukrainian and Syrian refugees. And how the vision of refugees held by the Swedish far-right has bled into the Swedish political mainstream.

On May 5, Daniel Bernmar, the group leader for the opposition Left Party in the Gothenburg municipal council, sent a series of tweets in which he detailed how fellow council members expressed dismay over the poor services and paltry benefits available to refugees arriving from Ukraine. While on the surface an egalitarian position, the irony, Bernmar pointed out, was that the levels of financial support and services about which they were complaining were set by the very same group of politicians…when the arriving refugees were predominantly Syrian.

Bernmar detailed a number of the specific concerns expressed by his colleagues.

Members of anti-immigration Sweden Democrats complained that the small amount of spending money given to Ukrainian refugees meant that they could not even afford to take local buses. Why, they asked, had the policy of allowing refugees to ride for free been scrapped? Others asked how without access to public transport Ukrainian refugees could be expected to take their children to school or look for work? And, in perhaps the most Swedish of issues, municipal councilors expressed concern that Ukrainian parents could not send children under the age of three to state-subsidized daycare.

Bernmar noted that he had “never before heard these parties or people address the unacceptable social or economic situation for refugees.” He then addressed the elephant in the room. The dismay expressed by colleagues over conditions facing refugees – conditions the same politicians approved when refugees were Syrian – was unsurprising, he wrote, given that they, “did not previously apply to white, Christian Europeans.”

These revelations should come as no surprise. While seemingly at odds with Sweden’s reputation for openness and egalitarianism, the fact is that political parties at both ends of the Swedish political spectrum have adopted increasingly aggressive anti-immigrant rhetoric and policies. Yet, when structural discrimination is presented in such a transparent fashion, it is still jarring.

At the most fundamental level, the case demonstrates how perceptions of the value of human life and human dignity are shaped by ethnicity, religion, and nationality. What was good enough for poor Muslims from Syria just isn’t good enough for white, European Christians. Racism and ethnocentrism don’t come much clearer than that.

But this revelation cuts even deeper and wider. And it applies to nations beyond Sweden’s borders, where immigrants and refugees struggle to construct new futures. What is evident from the comments made by the local politicians in Gothenburg is that they are fully aware of the impact of their policies on the everyday lives of refugees, how the ability to participate in the workforce, for example, is dependent upon basics such as transportation and childcare. That “integration” isn’t just a question of some mythological will, but of available material resources.

To remember that with Ukrainians, but forget it with Syrians, is cynicism of the highest order. It is to amplify the smear that there is a difference between refugees and “refugees.”