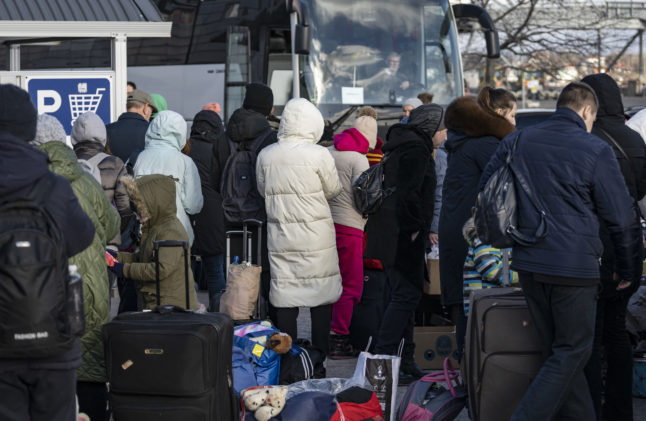 Refugees from Ukraine wait for buses after arriving in Karlskrona harbour on ferries from Poland. Photo: Johan Nilsson/TT

Thousands of Ukrainians have arrived in the towns of Trelleborg, Ystad, Karlskrona and Nynäshamn by sea since the beginning of Russia’s invasion of Ukraine three weeks ago.

Ludmila and her two daughters pull their suitcases into the ferry terminal after disembarking into the spring sunshine of Nynäshamn, a town an hour south of Stockholm.

There, together with 500 other passengers made up mostly of women and children, they are greeted by volunteers eager to give them basic necessities.

Nearby tables are stacked with water bottles, sandwiches, baby food and sanitary products. Even dog and cat food is available for those fleeing with pets.

Donated prams and buggies are lined up against a wall, and one table is covered with stuffed toys for children. Ludmila and her girls fled their home in Kharkiv, Ukraine’s second-biggest city, after Russia began shelling the city on February 28th.

“The bombing started, the air raid alarm went off. We quickly packed our bags to take the train,” Ludmila, who worked in a shoe factory, tells AFP.

As they headed for the train station they heard the sound of explosions in the distance, 20-year-old Anna and her 19-year-old sister Anastasia recall.

“But it was far from us and fortunately we were not hit,” says Anna, a programmer.

“At Kharkiv station there were a lot of people. And when we arrived in Lviv there were even more people. We arrived at three o’clock in the morning and we waited out in the street for a train to Poland,” she adds.

They had no plan for where to go after that.

In the end, they chose Sweden, a country once known for its generous refugee policy and which took in the highest number of asylum-seekers per capita in Europe during the 2015 migration crisis.

More than three million people have fled Ukraine since the start of the invasion, according to the UN migration agency IOM, with 1.8 million of them fleeing to Poland.

So far, ferry company Polferries has transported 5,600 Ukrainians free of charge from Poland to Nynashamn. Other ferry lines have transported thousands.

Sweden’s Migration Agency estimated earlier this week that at least 4,000 Ukrainian refugees were arriving in Sweden per day, with the real number likely much higher as not all were registered immediately on arrival.

Long queues have formed outside the Migration Agency’s offices around Sweden, with some asking people to turn around and come back another day.

Authorities are meanwhile scrambling to set up reception centres and accommodation for the tens of thousands expected.

The Migration Agency has drawn up planning scenarios to help it prepare for the arrival of anywhere between 27,000 and 212,000 Ukrainians between March and June.

That upper figure would top the record 163,000 asylum-seekers that Sweden — a country of 10 million people — took in during the 2015 migration crisis.

The country has since tightened its migration policy, citing the strain put on its immigration and integration systems.

Among other measures, it now grants only temporary residency permits. After the Russian invasion of Ukraine, the Swedish government has stressed that EU countries need to do more this time around to share the burden.

For Ludmila, who has just taken her first breaths in Sweden, the future is up in the air. Her mind is still focused on the past and what she and her daughters have left behind.

“We lost our house, our jobs, our lives, what little we had there. You see, people build something, aspire to make or be something in life, but we lost everything.”

The vast leaks cause significant bubbling at the surface of the sea several hundred metres wide, making it impossible to immediately inspect the structures.

Suspicions of sabotage emerged after the leaks were detected. Moscow denied it was behind the explosions, as did the United States, saying Moscow’s suggestion it would damage the pipeline was “ridiculous”.

The UN Security Council will meet Friday to discuss the incident.

The Nord Stream 1 and 2 pipelines, which link Russia to Germany, have been at the centre of geopolitical tensions in recent months as Russia cut gas supplies to Europe in suspected retaliation against Western sanctions following Moscow’s invasion of Ukraine.

While the pipelines — operated by a consortium majority-owned by Russian gas giant Gazprom — are not currently in operation, they both still contained gas.

On Thursday, NATO declared that the damage was “the result of deliberate, reckless and irresponsible acts of sabotage”.

“These leaks are causing risks to shipping and substantial environmental damage,” the Western military alliance said in a statement.

Danish officials said on Wednesday – prior to the discovery of the fourth leak – that more than half of the gas in the Nord Stream pipelines in the Baltic Sea had leaked into the atmosphere after they were damaged.

“A clear majority of the gas has already come out of the pipes,” the head of the Danish Energy Agency, Kristoffer Böttzauw, told a press conference.

“We expect the rest to escape by Sunday,” he added.

Defence Minister Morten Bødskov said Wednesday morning that, due to pressure of the gas leaking out, it would take “one or two weeks” before inspections of the damaged structures could begin.

Fatih Birol, executive director of the International Energy Agency (IEA), said at a symposium in Paris that to him it was “very obvious” who was behind the leaks.

He said natural gas shortages in the wake of the war in Ukraine could make for a tough winter in Europe.

“In the absence of a major negative surprise, I think Europe, in terms of natural gas, can survive this winter with a lot of bruises in our bodies in terms of prices, economy and social issues, but we can go through that,” Birol said.