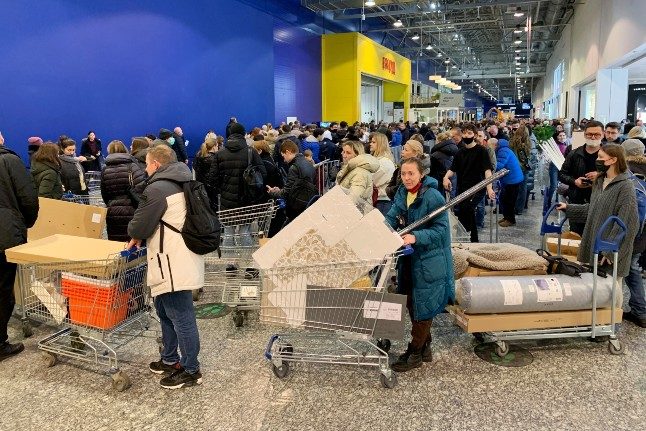 Customers in Moscow queuing up to buy goods at Ikea before it closed down earlier this month. Photo: Vladimir Kondrashov AP/TT

Obligatory ID checks will be introduced on passengers arriving in Sweden by ferry, in a new decision from the Swedish government.

Ferry companies are already required to collect information on passengers on journeys over 20 nautical miles (37 kilometres), but ID controls are only required if there are suspicions that a passenger has given false information.

Now, this requirement is being changed, so that all passengers’ ID must be checked.

The reason behind the passenger list requirement is to ensure that, in the event of an accident at sea, crew and rescue services know how many passengers are on board and who they are. The government argues that, in light of this, the new requirements to register correct information on passengers are even more necessary when there are many people using ferry services to flee war in Ukraine.

Sweden has a number of direct ferry links with Poland, who share a border with Ukraine.

Russia create copy of Swedish IKEA
Since the Russian invasion of Ukraine, many western companies have pulled out of Russia, including the Swedish furniture giants IKEA.
Russian politicians have threatened to take any companies that leave into state ownership. In recent days, a new phenomenon has started to appear, in the form of exact copies of western companies and brands which were formerly doing business in Russia. Now, this appears to have hit IKEA, Göteborgs-Posten newspaper reports.
According to documents from the Russian patent office, an application has been submitted to start a company listed as “Idea – furniture factory”, complete with a similar logo.
“Inter Ikea Systems B.V., as owners of the immaterial rights of the IKEA concept, including IKEA as a brand, are aware of this and are currently investigating the situation and possible measures”, IKEA’s holding group Ingka Group wrote in a comment to the newspaper.

Shoe company Kavat, who make popular shoes for children, moved their factory to Bosnia from Sweden nine years ago, and were given 700,000 kronor from the Swedish International Development Cooperation Agency (Sida) after promising to introduce a Swedish work ethic and Swedish work environment.

Now, public broadcaster SVT’s investigative reporting programme Uppdrag Granskning has revealed that the basic salary for workers in the Bosnian factory is 2,500 kronor before tax per month, employees do not have union rights and there is a fear among employees of reprisals if they speak up about their conditions.

Employees are not able to live off this amount – according to the Bosnian union movement for those working with textiles, leather and rubber, a family with two adults and two children need to earn at least 12,000 kronor per month.

“The workers here don’t have any rights at all,” a man using the false name “Vanja” who previously worked at the factory told SVT.

“We try to do our best to be good employers,” Kavat’s CEO, Magnus Ericson, told the programme.

Kavat said in a message to SVT that they take Uppdrag Granskning’s information seriously, and will work to improve the work enviroment and ensure that workers are able to live off their salaries.