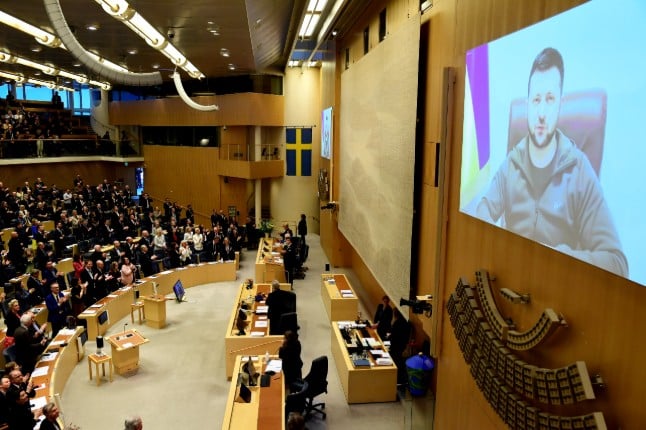 Zelensky began his speech by referencing the identical colours of the Swedish and Ukrainian flags.

“It’s no coincidence that both Ukraine’s and Sweden’s flags are blue and yellow, because we stand for freedom, justice and equal rights for all,” he said in a video link speech that got a standing ovation. “It is simple logic that Sweden is among the countries that has supported Ukraine the most.”

The blue and yellow flag is the symbol of freedom, Zelensky tells Swedish parliament.

In his speech, he thanked Sweden for the weapons it had sent to his country, called for tighter sanctions on Russia, and requested help in rebuilding his country’s cities in the aftermath of the war.  “It was a historic decision for Sweden to send military aid,” he said. “We are thankful for that”.

Not a member of NATO and officially militarily non-aligned, Stockholm on Thursday announced a second delivery of 5,000 anti-tank launchers.

Zelensky, who has made multiple appearances by video link before parliaments in other countries in recent weeks, was due to address an extraordinary NATO summit later Thursday.

In his speech to Sweden, Zelensky warned that Europe’s own future was at stake in the conflict in Ukraine, saying that Russia would “destroy freedom” across the continent and pursue its neighbours.

“If Ukraine wouldn’t endure and protect ourselves, it would mean that … all neighbours of Russia are in danger from now on,” he said.  “This is a fundamental challenge for the European security and defence system.”

He warned Sweden that Moscow had its Baltic Sea island of Gotland in its sights. Sweden reopened its garrison on Gotland in 2018, in the wake of Russia’s annexation of Crimea, after shutting it down in 2004.

“It would mean that you are in danger, because it is only the sea that divides you and this aggressive policy”, he said

“Russian propagandists already discuss on air, on TV broadcasts, how Russia will occupy Gotland and how they will control it for decades”, he added. “They think it would be comfortable to put anti-defence systems and bases there to cover the advance on the Baltic states.”

When it came to sanctions, he called for a new, tougher, sanctions package every week, a ban on the use of Russian oil, and  for Sweden to bar Russian ships from its ports.

He talked of the damage Russia had already done to his country. “Why has Russia done this?” he asked. “Why are they turning their neighbours into slaves?” he asked.

“If Ukraine had not defended itself,” he declared. “It would have meant that everything that both we and you value would disappear.”

Support for NATO membership has soared in Sweden since Russia’s invasion, but Prime Minister Magdalena Andersson has so far ruled out the idea. Joining the alliance risks “destabilising” northern Europe, she said.