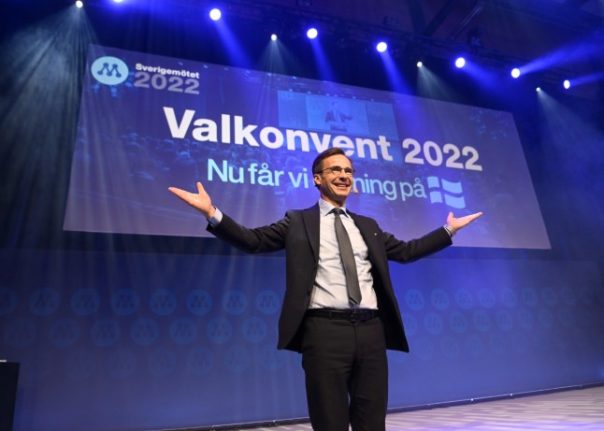 “Sweden belongs in Nato,” Kristersson said in his speech, announcing the five main election pledges at the party’s national congress. “The question is… no longer ‘if?’, but exactly ‘when?’, and exactly ‘how?’.”

“As Swedish prime minister, I am going to do everything to lead Sweden into Nato during the next mandate period,” Kristersson promised in his speech, made on Saturday in front of 2,000 Moderate party members in the city of Örebro.

The party is betting big that the coming election will be fought around Sweden’s defence, with its second big pledge being to increase defence spending to two percent of GDP by 2025, and its third to “get back control on law and order”. None of the party’s main pledges concern any of the Social Democrats’ classic campaigning issues, such as health, education, pensions or welfare.

On its website showcasing the pledges, the party promises to apply to join Nato, “if there is majority support in the parliament”.

This shows Kristersson going much further than his predecessor Fredrik Reinfeldt, whose position was that the country should only apply for Nato membership if there was a majority in parliament, if the move was also supported by the Social Democrats, and if Finland was also joining.

For Kristersson, the second and third of these were only ‘nice to have’. It would “be best”, Kristersson said, if Sweden were to join “as early as this spring, together with Finland”, and it would be “very much preferable”, if this were to happen “with broad political agreement over the left-right divide”.

But he made a point of no longer insisting on Reinfeldt’s two last requirements, putting pressure on the Social Democratic party to shift its own position on Nato membership.

“It’s high time for Sweden to come out of the closet. Time to bring an end to outdated locked positions,” he said. “Let’s not beat about the bush: it’s time for the Social Democrats to change their policies on national security.”

On its third pledge on law and order, the party is betting on a series of hardline policies borrowed from neighbouring Denmark, including criminalising gang membership, imposing double-punishment on gang crimes, and deporting more people who commit crimes.

It also said it would increase the number of police officers to 32,000 by increasing salaries and paying new recruits a salary while they are educated.

The party’s fourth pledge was to create a “completely fossil-free energy system through more nuclear power”.

Finally, its fifth main pledge was to “bring back the arbetslinjen [literally, “work-line”] in Swedish politics,” by which it means  getting people off welfare benefits and into work. To do this, the party said it would bring in a “welfare cap”, so that it is always more worth people’s while to work than receive benefits, cut taxes on labour, and crack down on benefits fraud.

The Social Democratic party is currently polling higher than it has for about eight years, with a recent poll by Sifo putting its support at 32.8 percent to the Moderate Party’s 21.4 percent.

But in Örebro, the Moderate Party, argued that the left and right blocs were still relatively even, with an opinion poll by Demoskop finding that, if both the Liberal Party and the Green Party falls under the four percent threshold to enter parliament (meaning their votes don’t count), there are just 13,000 votes between the right-wing and left-wing political blocs.

“It’s completely even at the moment, as it usually is in Swedish elections,” Kristersson said. “It’s the election campaign which will make the difference.”