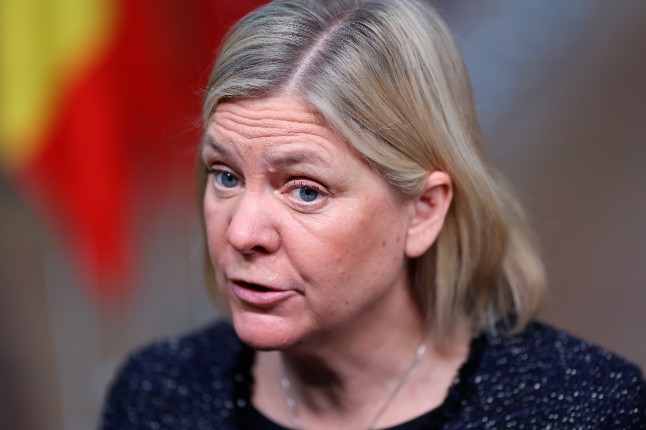 Sweden’s Prime Minister Magdalena Andersson told SVT that she did not rule out Nato membership. Photo: TT
“I do not rule out Nato membership in any way,” Magdalena Andersson told Sweden’s state broadcaster SVT. “But I want to make a well-founded analysis of the possibilities open to us and the threats and risks and involved, to be able to take the decision that is best for Sweden.”
Andersson faced criticism from opposition parties earlier this month when she warned that a Nato application from Sweden in the wake of Russia’s invasion of Ukraine risked “further destabilising the security of this part of Europe”.
Her party has also taken a decision at its annual congress not to join Nato, but Andersson told SVT that this decision had been taken in a different geopolitical situation, and could be revised.

“We should note that non-alignment has served Sweden well. It has kept us out of conflicts,” she said. “But when the whole map of security politics is being rewritten, you need to update your analysis and take your decision based on that.”

After Russia’s invasion of Ukraine, public opinion in Sweden has become increasingly favourable to Nato, with several polls indicating that a majority are now in favour of joining.

At the same time, the opposition Moderate Party has pledged to apply to join Nato if it ends up leading the government after the coming election on September 11th, so long as there is a majority in parliament in favour.