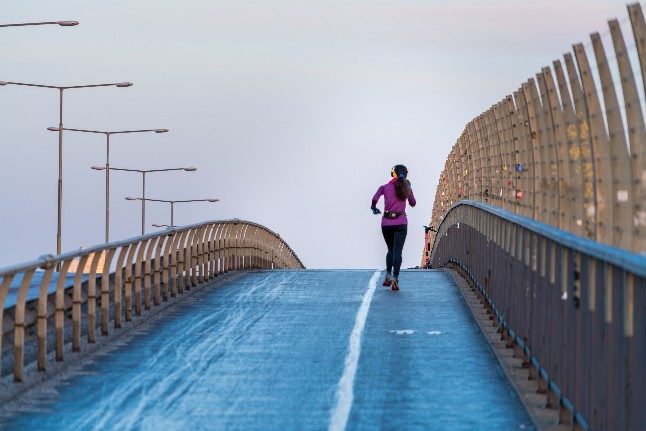 A woman jogs through Stockholm in the early evening. Photo: Jan

Anna was out shopping in a suburb of Gothenburg a few years ago. She was in her 70s. A group of young men verbally abused her and one grabbed her by her genitals. Annika went for an interview at a school in the city. She encountered unprovoked verbal abuse from teenagers as she walked through the building.

If you have lived in Sweden for a while, you will probably have heard of at least one such incident of sexual assault or harassment against women. Heaven forbid, if you are a woman you may have experienced it yourself. In both the cases above, I know the women involved.

Despite its reputation as a nation that treats women well, Sweden is far from perfect when it comes to male violence and intimidation against women.

This week, more fuel was thrown on the fire of debate around the issue, when leading members of the parliamentary opposition claimed that Sweden had become a very dangerous place for women.

“Sweden is ranked as the second most dangerous country for female travellers,” tweeted Niklas Gillström, the chief press officer for the centre-right Moderate Party. “It is absolutely awful… [we must] make Sweden safe for women again!” demanded Tobias Billström, the party’s parliamentary group leader, citing the same data.

The next day, Elisabeth Svantesson, one of the party’s leading women, issued a new political poster, stating: “It has become unsafe to be a woman in Sweden.”

“It hurts me that the Sweden I grew up in and raised my children in, which was seen as the world’s best and safest country, is now known for fatal shootings, gang violence, and humiliation robberies. And [has become] a country where women worry about being outdoors in the evening, or are giving up on going out for runs in the woods,” Svantesson wrote in a Facebook post accompanying the poster.

It is great that political leaders are talking about violence against women – this is a burning issue. However, there seem to be two problems with the way in which the Moderates have approached it this week.

First, let’s look at the claim that Sweden is the second most dangerous country in the world for women. The research that the party cites for this claim is extremely dubious.

In its ranking of dangerous countries for women, it places Sweden second beneath South Africa and above El Salvador, Jamaica and Honduras. South Africa is a country where one in four men in previous surveys stated that they had raped someone, and half of these said they had raped more than one person.

The other three countries are first, fifth and second, respectively, on the list of nations with the highest murders per capita.

Does that sound like Sweden to you? No, it doesn’t. The research is from a blog published by a website devoted to reselling  antivirus, passport manager, and VPN software – and not to the complex issue of comparative sociology that is essential to making meaningful comparisons between the position of women in different societies.

The blog acknowledges that it is “extremely difficult to quantify something as complex as safety”, but then it plunges ahead anyway, making a forest of questionable assumptions.

It even notes that only 41 percent of countries regularly produce data on violence against women, begging the question: how can we make accurate statistical comparisons when there are no data for 6 out of 10 countries? The Local contacted the author of the research, but she did not respond.

The problem is that Sweden’s official statistics show it to have a very high number of rapes. But this is principally because of the way rape is defined and recorded here, which boosts the numbers significantly. A recent study by Sweden’s National Council on Crime Prevention (Brå), reported by The Local here, found that Sweden would come out somewhere in the middle of European rankings for rape if other definitions of the crime were used.

The second problem with the Moderates’ approach to violence against women, is that it comes close to a narrative pushed by the Alt-right supporters of Donald Trump and other authoritarian leaders – namely that Sweden has seen a rise in rapes because of increased immigration from Muslim countries.

Elisabeth Svantesson makes this connection explicit by mixing up the problems of “fatal shootings, gang violence and humiliation robberies” – which are problems strongly linked with non-European immigrants to Sweden, for reasons we cannot go into here – with women worrying about being outdoors in the evening.

It is true, as Svantesson says, that one in three women fear going out of their home in the evening, according to the latest research from Brå. My own straw poll of women in my extended Swedish family suggests that this might even be an underestimate.

But it would be a shame if the centre-right opposition stooped to repeating dodgy research and racist myths about Sweden in a bid to win votes at this autumn’s election. The issues at stake deserve a more serious and considered approach.

“Sweden is one of the safest countries for women, especially when you visit us,” Susanne Udvardi, who works for the Freezone (Freezonen), Sweden’s largest helpline for victims of male violence, told The Local. “The most dangerous place for women is in the home, it is the boyfriend or ex who commits the violence.”

In the spring of 1999, Russia’s prime minister, Yevgeny Primakov, was on a plane to Washington for talks, just as Nato announced airstrikes on Serbia. The bombing campaign, aimed at halting Serb attacks on Kosovo Albanians, targeted Russia’s Slav and Orthodox ally. On receiving the news, Primakov turned his plane around in mid-air and flew back to Moscow.

This was the first major confrontation between East and West since the end of the Cold War. Russian public opinion swung overwhelmingly behind the Serbs. Moscow liberals warned the conflict would lead swiftly to “a strongly anti-Western, Cold War-oriented regime”. Vladimir Putin became prime minister that summer. And the rest is history.

This was “blowback” for Nato – the unintended adverse consequences of a foreign policy intervention. This week, Putin is experiencing blowback himself following his invasion of Ukraine, with Sweden rushing headlong to join Nato, whose actions helped unite Russia so suddenly against the West a quarter of a century ago.

Joining Nato brings down the curtain on a remarkable period in Swedish and European history. The last time the country declared war was in 1810 against the British. Not a single shot was fired, and peace was declared again two years later. Since then, Sweden has pursued a policy of neutrality in all armed conflicts.

That era ended on Monday. The government confirmed what everyone knew already – that it would apply to join Nato.

During the Cold War, neutrality gave Sweden the freedom to manoeuvre between the two blocs led by Moscow and Washington. Sweden joined widespread condemnation of the Soviet suppression of Czechoslovakia’s democratic uprising in 1968.

But its emblematic leader Olof Palme also backed the global movement against the Vietnam war, hosting a tribunal in Stockholm that symbolically put the USA on trial for war crimes in Indo-China. Here was a nation that had found a middle way between capitalism and communism, it seemed, with a diplomatic as well as an economic dimension.

Sweden became a leading voice against nuclear weapons. Successive leaders pushed for a nuclear-free zone in the Nordic and Baltic regions. Sweden’s self-image was of a “humanitarian superpower”, its independence on the world stage spilling over into anti-colonialism and feminism.

Following the collapse of the USSR in 1991, Sweden sought to make the most of the “peace dividend” offered by the end of the Cold War, closing military bases, ending conscription and slashing defence spending. By 2012 the head of the armed forces admitted Sweden could withstand a limited attack for only about a week.

All this is now behind us. The middle way is to become the Nato way. Sweden may continue to object to nuclear weapons, but it has opted for the US nuclear umbrella to ensure its security. It may continue to champion liberal causes, but it will have to bite its tongue as its allies with conservative Nato states such as Hungary and Turkey, not to mention the possibility of a second Trump presidency in the US.

Beyond the immediate concerns about Russian intentions in Ukraine, Sweden is contributing to the return of a polarised world. The optimism and hope heralded by the collapse of communism 30 years ago have turned out to be a chimera. New generations will grow up in fear of the enemy and in the shadow of nuclear annihilation. In these bleak circumstances, we should mourn the passing of Sweden’s neutrality in global affairs.

It is unfortunate that Sweden’s historic pivot is taking place with unseemly haste. While public opinion has clearly shifted in favour of Nato since the invasion of Ukraine, the majority in favour is still relatively slim and is based on fear rather than thoughtful and thorough debate. In a poll at the end of April, 55 percent of Swedish men but only 41 percent of women said yes to Nato. There are signs that opposition to Nato among the young may actually be growing.

But the decision to join Nato is a minor tremor rather than an earthquake. While Sweden may have been non-aligned, it has not been neutral for a long time.

Sweden’s pro-Western orientation during the Cold War was an open secret on both sides. As early as 1954, Sweden signed a top secret agreement with the US regarding collaboration and intelligence sharing, including spying on Russia, whistleblower Edward Snowden revealed. Sweden already makes “particularly significant contributions” to the alliance, Nato says. Accession to the European Union in 1995 came at the cost of the abolition of neutrality as a principle.

In this sense, joining Nato means Sweden is now shedding its mask of neutrality, rather than adopting a radically new stance.

The point of any nation’s defence policy should be to provide its population with a secure space for peace, love and Kumbaya. There is an almost giddy excitement in much of the Swedish media about Nato membership. As we progress towards our armour-plated future, let’s not forget what we have lost.