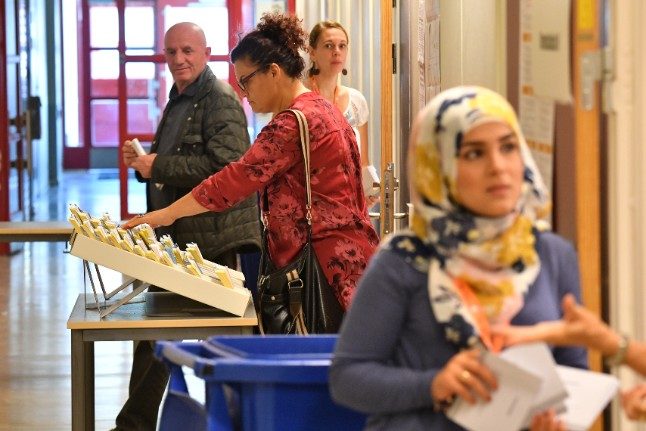 A man in the background looks at which party voting ballot a woman is choosing at a ballot station in Malmö in the 2018 election. Photo: Johan Nilsson/TT

How Sweden is run

There are three different levels of government in Sweden: the national parliament (Riksdag) which has 349 seats, the 20 county councils (landsting), and 290 municipal assemblies (kommunfullmäktige). These three levels don’t form a hierarchy but rather each has its own areas of responsibility.

Sweden holds elections for each of these three bodies every four years, always on the second Sunday in September. In 2022, that means the election falls on September 11th.

Since the 2018 elections, Sweden has been led by the Social Democrats, first in a coalition with the Green Party until November 2021, and since then in a minority single-party government.

The government was propped up by the Centre and Liberal Parties until June 2021. These parties agreed to to support the Social Democrats’ prime ministerial candidate in the so-called January Agreement at the start of 2019 and vote for the government’s budgets in exchange for a long raft of policy concessions.

The Centre Party still supports the current government and is unwilling to support a new government which itself is reliant on the support of the far-Right Sweden Democrats. The Liberal Party has, however, switched position, and intends to support Moderate Party leader Ulf Kristersson as prime minister after the election.

Stefan Löfven was prime minister until November 2021, when he was replaced by Magdalena Andersson, Sweden’s first female prime minister.

To vote in Riksdag (parliamentary) elections, you must be a Swedish citizen and aged over 18 on the day of the election.

Non-Swedish citizens can vote in county and municipal elections if they are citizens of an EU country, Iceland or Norway.

Citizens of other countries, including now the UK, also get the right to vote in these elections if they have been registered as a permanent resident in Sweden for three consecutive years before the vote.

Meanwhile, Swedish citizens living abroad can also vote in parliamentary elections; they get this right automatically for their first ten years abroad and after that need to apply to the Swedish Tax Agency (Skatteverket) every ten years to remain on the electoral register. Swedes who are temporarily abroad over the date of the election can vote by post, in an embassy, or by proxy.

Around 7.5 million people will be eligible to vote in this year’s parliamentary election, according to preliminary figures from Statistics Sweden published last September. This is up by 180,000 on the 2018 figure.

The number of first time voters has also grown by 40,000 compared to in 2018, with the group increasing from 5.3 percent to 5.7 percent of the electorate.

Some 130,000 more foreign citizens are eligible to vote in municipal elections this year, with around 670,000 predicted to cast their ballots.

These numbers will be adjusted as voting cards are sent out in the weeks before the election.

Sweden has a high voter turnout, with around 87 percent of the eligible population voting in the 2018 election.

READ ALSO: These are the top election issues for foreigners in Sweden: reader survey

In the weeks leading up to the election, voting cards are sent out to all eligible voters from the Election Authority, also known as Valmyndigheten. These are sent to the address you are registered at with Skatteverket, so it’s important to make sure your personal details are up to date.

This letter will also include information about the location and opening time of your nearest polling station on election day. These are municipal buildings, usually schools or libraries.

In some locations, it’s possible to cast your vote in advance, starting three weeks before the day of the election on August 24th. If you do this, you can use any advance polling station, but if you vote on the day, you must go to your designated location.

You are only allowed to cast your vote by post if you live abroad, and postal votes can be sent in up to 45 days before election day.

At the polling booth, there are different ballot papers for each of the three elections taking place: yellow papers are for the Riksdag elections, blue for the county council, and white for the municipal council.

There are also different kinds of ballot papers, allowing you to vote either for a particular party (without identifying a specific candidate), to choose from a list of candidates as well as parties, or to vote using a blank ballot paper. On blank ballot papers, you can write down any party and candidate. In theory, it’s possible to write anyone’s name, and if that person got a large enough proportion of votes, they would be elected.

You then put the ballot paper you picked in an envelope and hand it to the election officer in the room.

Following criticism from the Organisation of Security and Cooperation in Europe (OSCE), the way voters collect their ballot papers has been changed in this year’s election.

In previous elections, voters would pick ballot papers for the party they wanted to vote for in an open area of polling stations.

The OSCE, in its report on the 2018 election, said that this was a threat to voting secrecy, as others in the polling station can tell which party a person is voting for by looking at which paper they pick up.

In this election, the area holding the ballot papers will be for the first time have to be shielded from public view, so that ballot papers can be picked up in secrecy.

Previously the only way to keep your vote secret was to collect several different ballots before going behind the screen to vote.

How is the winner chosen?

Sweden has a one-chamber system, and MPs are elected using proportional representation under a similar system to many European countries. This means that the number of seats each party gets in parliament roughly equates to their share of the nationwide vote.

However, parties must gain at least four percent of the national vote in order to enter parliament, or three percent to enter a county council or regional assembly. For municipal assemblies, the threshold is either two or three percent, depending on how many constituencies are in the municipality.

At the moment, two political parties, the Green Party and the Liberal Party, are below the threshold, with the former on about three percent and the latter on about two percent, leaving their supporters with a dilemma over whether to vote for them, even though there is a risk that their vote will go to waste, and so make it more likely that a coalition is formed by parties on the other side of the left-right political divide.

Sweden is divided into 29 constituencies for parliamentary elections (roughly one for each of the 21 counties, with the larger counties of Stockholm, Skåne, and Västra Götaland divided up further), each of which has between two and 43 seats depending on their population. Fixed constituency seats make up 310 of parliament’s 349 seats, with the remaining 39 distributed so that each party’s proportion of seats matches up to their proportion of the national vote as closely as possible.

If one single party gains more than 50 percent of the vote, its leader becomes prime minister, but this is very rare in Sweden.

Usually, the party that wins the largest number of seats will try to form a government by building a coalition with other parties that hold similar stances.

Under Sweden’s system of negative parliamentarianism, a candidate does not need 50 percent of MP’s to vote in their favour to become Prime Minister – they just need to ensure that at least 50 percent do not vote against them.

You can find more information in English on the how Sweden’s election will work here on the website of the election authority.