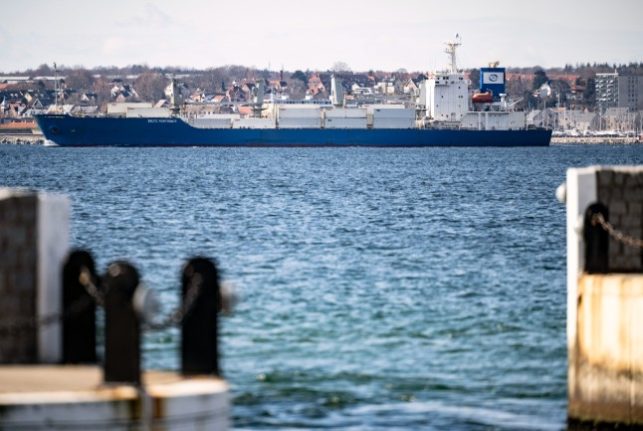 The Baltic Voyager, a Russian vessel, anchored outside Helsingborg. Photo: Johan Nilsson/TT
Sweden to offer fourth vaccine dose to over-65s
Sweden on Monday said it would extend the threshold for offering a fourth dose of Covid-19 vaccine from 80 years old, down to 65, with the aim of maintaining protection against the virus in this age range.
“The goal is exactly the same as before — to limit the risk of serious illness and death from Covid-19, because we are still seeing a significant spread both in Sweden and in other countries,” said Karin Tegmark Wisell, general director of the Public Health Agency, in a press statement.
Swedish Vocab: fortfarande – still
Right-wing voters in Sweden against profit-making in welfare
A full 67 percent of people in Sweden now support a ban on companies making profits from supplying state-funded welfare services such as schools, healthcare, and elderly care, with even voters for right-wing parties becoming more negative, a new survey by the SOM institute at Gothenburg University has found.
“There has actually never been a particularly positive sentiment towards making profits from supplying tax-financed healthcare, education, and elderly care,” said Johan Martinsson, Research Director at the university’s Laboratory of Opinion Research. “But in recent years opinion has swung even further in a negative direction, and even fewer want to allow it.”
Even among right-wing voters, the so-called balansmåttet or “trust margin”, which subtracts the percentage who oppose a profit ban from the percentage who support one, is now positive at +23, after having been below zero in 2018.
“In fact, all groups have become slightly more negative, but the biggest change has taken place on the right, and it has grown for three years in a row,” Martinsson said.
Swedish Vocab: en förändring – a change
Swedes most in favour of defence spending in Europe

People in Sweden are more positive towards increased defence spending than citizens of any other country in the EU, according to a new opinion poll by Novus. Torbjörn Sjöström, Novus’ chief executive, put this down to Swedes’ higher trust in government.

“This is often the case when politicians unveil a big investment, so now, with the Ukraine war in the background, Swedes are positive towards it, because people still have relatively big trust in government,” he told Swedish state broadcaster SR.

Some 78 percent of people in Sweden think that the defence budget should increase, compared to an EU average of 52 percent.

Municipalities in Sweden call on government to commit to backing refugee spending
The Swedish Association of Local Authorities and Regions has called for the government to guarantee that municipalities will be reimbursed for the increased spending needed to support the expected 76,000 refugees coming to Sweden from Ukraine.

“Caring for refugees is ultimately a national responsibility, and today the municipalities have no guarantee that they will be reimbursed for all the costs that are likely to arise,” Annika Wallenskog, the association’s chief economist, told Sweden’s TT newswire.

The association has sent in a request for clarification to the government.

The association also wants the government to change some regulations, so that Ukrainian mothers can get more than the current 15 hours a week of daycare for their children over the age of three.

Finally, it wants the government to commit money towards education in the Ukrainian language, as current budgets are insufficient.

Swedish Vocab: en krav – a demand
Russian banana boat stranded after port workers refuse to land cargo
The Russian cargo ship Baltic Performer is stuck outside the port of Helsingborg, unable to unload its cargo of bananas from Ecuador, after a decision from the Swedish Dockworkers Union not to unload cargos from Russian vessels.
The ship’s owners tried but failed over the weekend to get workers who are members of the Swedish Transport Workers’ Union to unload the cargo. While the union has also voted not to unload Russian vessels, the decision will not come into force for a month.
But over the weekend, the owners nonetheless failed to get sufficient workers, meaning the bananas remain on board while the ship has anchored outside the port.
Swedish Vocab: att ankra – to anchor

Sweden’s Psychological Defence Agency has condemned Russia’s propaganda operation in the wake of the invasion of Ukraine as a “total failure”, pointing to the way that social media accounts run by Russian operatives have seen posts in favour of Russia’s invasion drowned out by louder critical voices.

“We have a good understanding of how they operate and here they have totally failed,” Mikael Tofvesson, chief of one of the agency’s units.

He points to a tweet from the Russian foreign department that argued that everything was going according to plan and “all our goals are going to be met”. “Life will soon return to normal in the areas freed from the nationalists.”

“That’s something they should only have posted in a medium that they themselves control and know that they will not get any pushback,” he said. “They made themselves the target, which is unprofessional.”