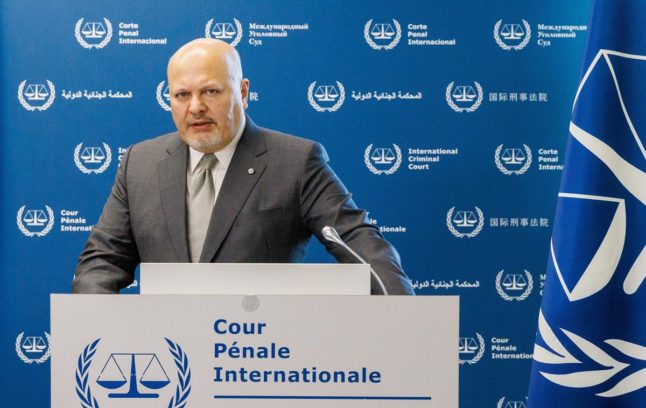 This week, people across the world have seen pictures of the horrible consequences of Russia’s war in Ukraine in the cities of Bucha, Irpin, and Hostomel, with cities destroyed, civilians killed and sexual violence committed against Ukrainian women.

The Swedish Prosecution Authority has launched an investigation into war crimes with the aim of securing evidence that could be used in future legal proceedings, either in Sweden or in the International Criminal Court (ICC). In addition, Sweden’s Prime Minister, Magdalena Andersson, has pledged to provide financial support and legal expertise in a future ICC investigation.

“The terrible images of destruction and reported executions of civilians in Bucha, Ukraine in wake of Russian aggression are reminiscent of darkest scenes from European history,” she said in a tweet.

“Attacks against civilians, executions, and rape are war crimes,” tweeted Ann Linde, Sweden’s minister of foreign affairs. “Those responsible must be held to account.”

Sweden’s support for the ICC shows that supporting legal processes, as well as military and economic support, can be a way of countering Russian aggression.

International law, which is often unsatisfyingly slow and frequently criticized for being toothless, has shown itself to be surprisingly effective.

Since the annexation of Crimea and the occupation of Eastern Ukraine in 2014, dozens of legal proceedings have been launched and are pending against Russia in international courts, alleging that, firstly, armed conflict between nations took place in Eastern Ukraine, and secondly, that Russia has had effective control over Crimea since 2014.

Yet Russia has made brazen attempts to assert that it is fully in compliance with the rules and norms of international law.

Readers of The Local will hardly need reminding of the full-scale war Russia has been waging in Ukraine since 24 February 2022.

Russian actions against Ukraine represent an unprecedented violation of international law and human rights, including:

Unfortunately, all these facts have been confirmed.

These violations are so serious and so obvious that from the first weeks of the war, Russia has been the subject of several new proceedings in international courts.

Whereas typical processing times are measured in months or even years from the start of proceedings to a decision, in one example it took less than a week from the day Ukraine submitted its application for a court to reach an interim decision.

So what are the main proceedings currently underway against Russia following its invasion of Ukraine?

On 26 February 2022, Ukraine filed a lawsuit against Russia at the ICJ under the 1948 Convention on the Prevention and Punishment of the Crime of Genocide (the “Genocide Convention”). On 16 March 2022, the ICJ ordered Russia to: i) immediately suspend the military operations it commenced on 24 February 2022 in Ukraine, and ii) ensure that nobody, including any military or irregular armed units, take any steps in furtherance of the military operations.

What does it mean? It means that ICJ is convinced that:

It goes without saying that Russia is currently in breach of the ICJ’s order.

On 28 February 2022, the ICC prosecutor Karim A.A. Khan QC decided to investigate alleged Russian war crimes (targeting of civilians, infrastructure, or property) and crimes against humanity (widespread or systematic attacks directed against a civilian population) occurring in Ukraine. The ICC was spurred into action following referrals from ICC member states urging an investigation, with 41 member states submitting referrals as of 14 March 2022.

What does it mean? Almost 50 states have made referrals (including Sweden) to the ICC about allegations of the most serious violations of international law: war crimes and crimes against humanity.

It took less than 24 hours for the ECHR to react, from the day Ukraine applied for help in relation to “massive human rights violations being committed by Russian troops in the course of the military aggression against the sovereign territory of Ukraine”.

On 1 March 2022, the ECHR confirmed that Russian military action gives rise to a real and continuing risk of serious violations of human rights, protected by the European Convention on Human Rights, in particular:

What does it mean? In less than 24 hours, the court’s judges concluded that Russia had started a military operation in Ukraine that violated basic human rights.

What else can be done?

International courts are starting legal proceedings in the most efficient ways, and Sweden is showing an example by providing strong support for Ukraine. But to prevent more crimes, more actions are needed, including but not limited to:

Russian aggression against Ukraine has a long history and was previously considered to be simply “politics”. However, Russia’s invasion of 24th February 2022 marks a clear turning point.

It is now clear for everyone, from international legal authorities and governments to ordinary citizens with only a passing interest in politics.  Russia started an illegal war in Ukraine and is committing unprecedented violations of human rights. The second turning point is 3rd April 2022, when the world saw clear evidence of Russia committing serious war crimes against Ukrainians.

Ukrainians all over the world are grateful to Sweden and other nations for their assistance in our hour of need. Together we can stand against the most serious violations of human rights and international law.

Last week saw a global storm in a Swedish teacup. The hashtag #Swedengate trended briefly in the US and the UK, sparked by an obscure observation that some Swedes would sometimes exclude visiting children from the family evening meal.

Much fun was had at Sweden’s expense, and foreign media raised an amused eyebrow at all the fuss. But the conversation soon moved on. Cheap jibes at Swedish hospitality offered some light relief from war in Ukraine and the Texas school shooting.

Not so in Sweden. For four straight days, #Swedengate trended on Twitter among the top 10 hashtags in this country, not to mention a torrent of posts on Facebook and elsewhere. Popular tweets racked up tens of thousands of likes. Respected authors and academics hit the airwaves to explain the custom at issue. The placid Swedish duckpond (ankdammen) became a whirlpool.

So why did most of Sweden spend the best part of a week debating its food culture? Swedes enjoy international attention, it makes a small northern nation feel noticed and important. Articles about Sweden in foreign newspapers are often picked up and discussed in Swedish media. As one Swede wrote during a Swedengate dispute on my Facebook feed, “we love to see ourselves as strange and special, even exotic”.

But if some ripples are still being felt abroad, the eye of the storm hangs over Sweden itself. Swedengate was a clash between recent immigrants to Sweden and Swedes with deeper roots in the country. Or, to put it more bluntly, between multicultural Sweden and white Sweden.

“New Swedes” (nysvenskar) often come from cultures that are extravagantly generous with respect to food. The idea that a guest, let alone a child, should sit separately and unfed during a meal seems monstrous to people with Iranian, Afghan, Arab or African backgrounds. My wife’s side of the family here, which has Polish roots, are positively mortified by the thought that a visitor might not be fed.

Feeling this pressure, the old Swedes dug in their heels. The sensible thing would have been to lighten up, take the hit, confess that this once used to happen but now not so much, and admit that it looks to outsiders like very mean behaviour. This was the approach of singer Zara Larsson, who poked fun at “peak Swedish culture” and joked that “we might not serve food but we do be serving bangers” (i.e. great pop songs).

Instead, most old Swedes performed somersaults to defend the practice of excluding others’ children at mealtimes. In the mainstream media, it was explained in terms of personal insecurity or embarrassment, individualism, 19th century poverty, even respect for other families (!). On social media, people furiously supported the practice or furiously denied that it ever happened; they claimed it was not a Swedish phenomenon, or dismissed the whole thing as irrelevant.

In any case, it is impractical to feed kids who turn up unexpectedly at mealtimes, said some. Others claimed it was an attempt by Russian trolls to derail Sweden’s Nato membership. Sweden’s Psychological Defence Agency (yes, there is such a thing) investigated whether Swedengate was a foreign disinformation campaign (it wasn’t). Author Jens Ganman, better known for his cynicism about Sweden as a cauldron of immigrant crime, was offended that people were ignoring his nation’s generosity towards refugees.

The irony involved in all this was not lost on new Swedes. “As a white swede, how does it feel being judged for something that only a ‘small’ minority of your nationality do?” tweeted one, hinting at mainstream Sweden’s suspicion of Muslims as woman-hating extremists and terrorists. Said another: “It’s fucking wild to see all these people getting super defensive about #Swedengate.”

And new Swedes swiftly grasped that old Swedes were defending the indefensible; the Svenssons were in a hole and digging themselves even deeper. Whichever way you look at it, the practice – however rare it might be – of not inviting kids to share a family meal is, frankly, bizarre.

Lovette Jallow, an author who emigrated to Sweden from Gambia when she was 11, wrote: “Laughing at Twitter finding out that Swedish people will not feed strangers. As a kid growing up here we knew to just go home around dinner time. On the flipside, my mom would feed Swedish kids though.” Centre Party youth leader Réka Tolnai tweeted: “It’s funny that the world has discovered what we immigrant kids have been talking about for years.”

Since the mood in Sweden swung against asylum and immigration in late 2015, new Swedes, particularly those from outside Europe, have experienced persistent pressure to prove that they fit into Swedish society. They have been told at every opportunity that they must integrate into Swedish society and conform to its behavioural norms. And no matter how hard they try, it is never enough – non-white Swedes feel keenly that they are second class citizens.

With Swedengate, the boot was suddenly on the other foot. Who wants to be Swedish when Swedes are so weird?! For people from the Global South, as several observers noted, Swedengate became less about hospitality and more about far-reaching criticisms of Swedish society, such as its history of colonialism and racism. Using a debate about food to attack someone for racism seems a bit like jailing Al Capone for tax evasion. But the bigger picture is that new Swedes felt emboldened by Swedengate to express their broader grievances against Swedish culture.

The first week of June was the moment when new Swedes, immigrants, expats, whatever you want to call them, found their voice. Swedengate marks a step towards immigrants speaking up for their rights and celebrating the many contributions they make to Swedish society – not least in terms of helping to introduce a more warm and welcoming culture around food.