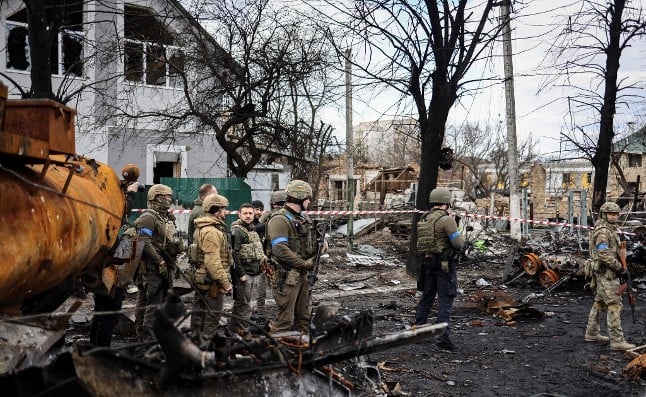 Ukrainian President Vladimir Zelensky in the recaptured town of Bucha, where Russian troops are accused of carrying out war crimes. Photo: Ronaldo Schemidt/AFP

“Given the information that is available about the situation in Ukraine, there is reason to believe that grave war crimes are being committed,” the Swedish Prosecution Authority said in a statement, adding that preliminary investigation had been opened.

The authority said that currently no individual was suspected of a crime. “The purpose is to as early as possible secure evidence that could be available in Sweden so that it could be used in future legal proceedings, either in Sweden, another country’s court or in an international court such as the International Criminal Court, ICC.”

Last month the ICC launched its own probe into possible war crimes in Ukraine.

“I have notified the ICC Presidency a few moments ago of my decision to immediately proceed with active investigations in the Situation” in Ukraine, Karim Khan wrote in a statement.

The Hague-based court’s chief prosecutor Karim Khan said on March 3 that he believed there was a “reasonable basis” to believe that crimes within the court’s jurisdiction had been committed.

The Swedish prosecutors on Tuesday encouraged people that have been the victims of or witnessed “violence against civilians in Ukraine” to contact authorities.

For war crimes Sweden applies a principle of universal jurisdiction, meaning that its courts can try a person on serious charges such as murder or war crimes regardless of where the alleged offences took place.

Calls for war crimes investigations and trials over Ukraine have intensified after horrific images emerged of corpses lying in the streets of the town of Bucha after the withdrawal of Russian troops.

Moscow has denied responsibility and suggested the images are fake or that the deaths occurred after Russian forces pulled out of the area.

But newly released satellite photographs taken by Maxar Technologies in mid-March, before the Russian withdrawal, showed what appeared to be bodies in some of the same places they were later found by Ukrainian troops and seen by journalists.