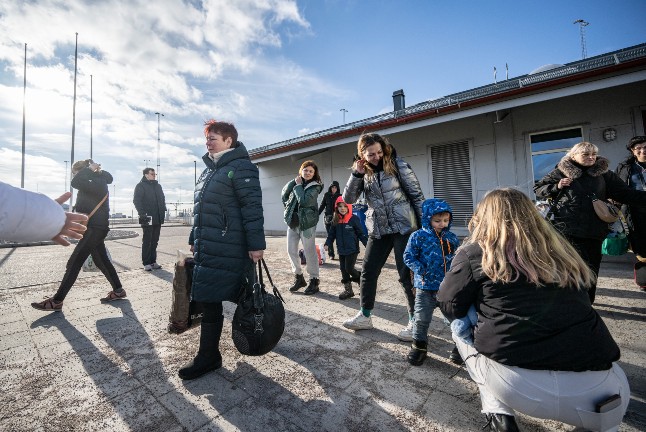 Ukrainians arriving by ferry in the port of Karlskrona at the start of March. Photo: Johan Nilsson/TT

Are Ukrainians allowed to work in Sweden?

Yes. All Ukrainians over the age of 16 who receive a residency permit through the EU’s Temporary Protection Directive get an automatic work permit, and according to Sweden’s labour minister Eva Nordmark, Sweden is currently taking an average of about nine days to register new arrivals. This means Ukrainians could potentially start working and earning within weeks of arriving in Sweden.

Sweden’s labour minister Eva Nordmark, said that many Ukrainians arriving in Sweden had expressed a clear desire to be able to work and earn their own money during their stay in Sweden.

“It is good both for Sweden, and for the individuals if as many as possible find a job where their skills can be put to use,” she said in a press statement.

What do Ukrainians need to do to get a job?

The Swedish government is recommending all Ukrainian adults arriving in Sweden to register with the Swedish Public Employment Service, which will then try to find them a suitable job. (You can find information here in Ukrainian and Russian).

To register with the employment service, Ukrainian arrivals will need a valid proof of identity such as a passport, a residence permit, and a coordination number, which can be obtained at one of the Swedish Tax Agency’s service centres. (You can find information here in Ukrainian and Russian).

Ukrainians will also need a coordination number to open a Swedish bank account so that they can be paid.

What measures did Sweden’s government announce on Thursday?

The government instructed the Swedish Public Employment Service to prepare information in the Ukrainian language to all new arrivals over the age of 18 on the current state of the Swedish labour market, including information on how the labour market functions, which industries and professions currently have labour shortages, and how to look for a job.

The government has also instructed the Swedish Migration Agency to work with the employment service to pass on this information as Ukrainians are registered in the system.

The government has also asked the Migration Agency to give all new Ukrainian arrivals a compulsory introductory briefing on Sweden’s society and social system, to make it easier for Ukrainians to navigate the country.

Where are the labour shortages in Sweden?

The employment service has previously named the hotel and restaurant sector, retail, elderly care, farming and forestry, as areas where there is a shortage of labour.

How many Ukrainians have come to Sweden so far?

According to Ygeman, the number of arrivals is currently roughly in line with Migration Agency’s most likely scenario of 76,000 people coming before July 1st. So far, about 30,000 Ukrainians, mostly women and children, have arrived in Sweden.