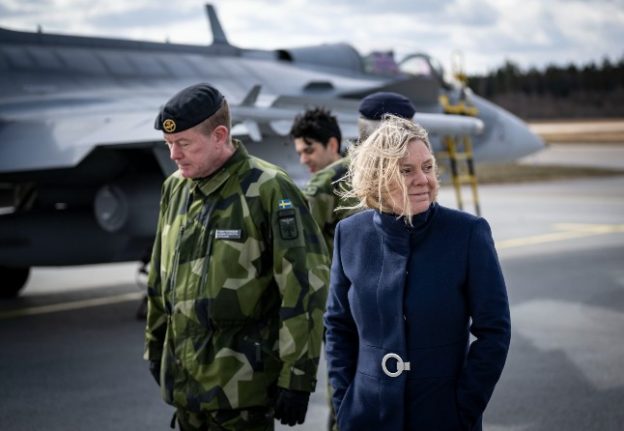 What would need to shift for Sweden to join Nato this summer?

The decision on whether to submit an application to join Nato is for Sweden’s government to take, not its parliament.

This means that until a new government is formed after the September 11th election, the decision lies solely in the hands of the Social Democrats.

A Swedish security policy review is due to be completed “by the end of May”, which some observers predict could act as a trigger for Sweden to join.

Parallel to this, the Social Democrats on Monday launched an internal party debate on its security policy, which is due to be completed “by the summer”, which some see as preparing the ground for a membership application.

Historically, there’s been a consensus that a decision on Nato membership must be taken by Sweden and Finland together.

Finnish President, Sauli Niinistö, reiterated last week he still believed that the two countries should try to act in concert.

“I believe it is important to try and reach the same opinion,” he said. “It is very important that we discuss continually with the Swedish government and Swedish lawmakers.”

However, Finland’s debate has moved faster than Sweden’s, and if it decides to join in the coming weeks, this could accelerate Sweden’s decision.

On Monday, the Times newspaper cited unnamed US officials saying that Washington expected Finland’s application in June, with Sweden to follow shortly afterwards.

How close is Finland to joining Nato?

Prime Minister Sanna Marin reiterated in an interview on Finnish television on Saturday that the country should take its Nato decision “in the spring”.

The Finnish government will on Wednesday publish its analysis of the security implications of the various options, after which a decision could be made imminently.

While Marin has been careful not to announce a decision in advance, the shift in her rhetoric since Russia’s invasion of Ukraine has convinced many that her party, the Social Democrats, may soon back joining the security alliance.

“There is no room here for blue-eyed [naivity],” said Marin. “Finland is a part of the West, and the US is an extremely significant partner. Our contacts to Estonia are extremely close.”

“The doors to Nato are now open, and Finland should take a decision during the spring,” she said.

Similarly the Centre Party, which has long opposed Nato membership, empowered its leader, Annika Saarikko, at a congress on Saturday to back whatever decision Finland’s government deems necessary to bolster the country’s security, “including a Nato application”.

Even the Finnish Green Party is showing signs of backing a Nato membership.

Which political parties in Sweden have changed their positions on joining Nato?

The most significant shift has been within the Sweden Democrats, which were previously opposed to Nato membership.

Jimmie Åkesson, the party’s leader, said on Saturday that if Finland were to join Nato, Sweden should follow shortly after.

“If Finland goes forward very rapidly – some people are talking about June – that really brings the question to a crunch,” he told the Svenska Dagbladet newspaper. “Then I think — and this hasn’t been approved by the party committee — we have to launch the process as quickly as possible, despite everything.”

The Sweden Democrats then held a special meeting of its party committee on Monday at which the committee gave Åkesson a mandate to back Sweden joining the alliance.

The Moderate Party has also shifted position, with the party’s leader Ulf Kristersson in a speech last week calling for Sweden to send in application to join Nato, together with Finland, at the end of June.

The party has made Nato membership its chief campaigning issue in the run-up to the general election on September 11th, with Kristersson pledging that a Moderate-led government will apply to join if there is a parliamentary majority, regardless of the Social Democrat’s position.

Under the party’s previous leader Fredrik Reinfeldt, the party was not opposed to joining Nato in theory, but said that Sweden should not join without “broad parliamentary support”, with the backing of the Social Democrats.

Which political parties are still on the fence?

The Social Democrats have shifted their rhetoric, with Prime Minister Magdalena Andersson saying at the end of March that she did not rule out a Swedish decision to join Nato.

The party on Monday launched an open party debate on the issue, with all interested members invited to participate.

“The analyses behind the position on security politics taken at the Social Democratic party congress are based on a reality that no longer exists following Russia’s illegal war,” the party said in a press release.

“If, during the dialogue, if becomes clear that we need to take a new decision on security politics, then it’s up to the party’s leadership committee, as the highest decision-making organ between congresses, to take such a decision.”

Peter Gustavsson, editor of Rörelsen (The Movement), a Social Democrat newsletter, who is himself a convert to Nato membership, told the Politico newspaper that he believed “the big chunk” of Social Democrats were currently reconsidering.

However, there are also signs that some big figures in the party want to hold back.

On Saturday, the Finnish MP Erkki Tuomioja claimed that Sweden’s defence minister, Peter Hultqvist, has been promoting an alternative to Nato membership involving a military alliance between Finland and Sweden, backed by the US.

The head of the Social Democrats’ youth party also over the weekend told Sweden’s state broadcaster SVT that her organisation was opposed to Sweden joining the security alliance.

“Sweden should increase cooperation with the EU, not join Nato,” she said. “In that sense, this is probably a change in our position where we are showing that we need to take a position between a European defence, or a Nato defence, and we think the European side is better.”

Magdalena Andersson on Saturday tried to seize back control of the debate, attacking the Moderates for politicising the issue, and saying she believed Sweden should not join Nato unless the decision was backed by three-quarters of MPs.

Which parties are most opposed?

The Green Party, while not absolutely ruling out Nato membership, is somewhat more sceptical than the Social Democrats.

The Left Party is most opposed to joining the alliance. “My opinion is that we are much safer in Sweden if we are militarily non-aligned,” the party’s leader Nooshi Dadgostar, told SVT last month, adding that the right-wing parties should not push ahead even if they have a parliamentary majority. ” I am concerned that we have a broad consensus. That we do this together as a people and a nation.”

The presidency said the meeting “will be preceded today by a round of talks between Finnish, Swedish and Turkish officials hosted by Nato in Brussels.”

Russia’s invasion of Ukraine earlier this year saw the two Nordic countries abandon decades of military non-alignment by applying for Nato memberships in May.

But the joint membership bid, initially believed to be a speedy process, has been delayed by Turkey’s opposition to Finland and Sweden joining the alliance.

Ankara has accused Finland and Sweden, in particular, of providing a safe haven for outlawed Kurdish militants whose decades-long insurgency against the Turkish state has claimed tens of thousands of lives.

The Turkish leader has also called on Sweden and Finland to lift arms embargoes imposed against Turkey in 2019 over Ankara’s military offensive in Syria.

Erdogan signalled on Saturday that no progress had been made in Sweden’s bid to join Nato, urging Stockholm to take “concrete actions” to meet Ankara’s concerns, his office said.

Turkish officials said Ankara does not view the summit as a final deadline for resolving its objections.