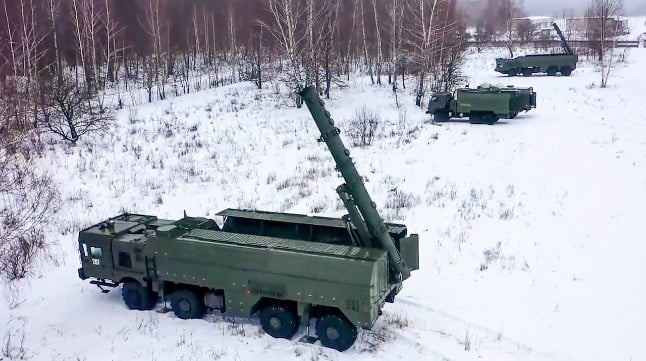 Russian Iskander missiles, such as those already in Kalingrad, are tested during an exercise in Russia. Photo: TT

Writing on his channel on the messaging app Telegram, Medvedev, who is now deputy chair of Russia’s Security Council, said that the Baltic Region could no longer remain non-nuclear if Finland and Sweden join the defence alliance.

“If this is done, no non-nuclear status of the Baltic will be possible,” Medvedev said. “The balance must be restored.” The result for Sweden and Finland, he continued, would be nuclear-armed Russian ships just “arm’s length” from their homes.

“Until today, Russia has not taken such measures and was not going to,” he added.

The prime ministers of Finland and Sweden on Wednesday shifted the process leading to Nato memberships up a gear, with Finland’s Sanna Marin declaring that a decision would be taken “within weeks, not months”, and Sweden’s Magdalena Andersson revealing that she wanted to get a decision taken in time for it not to clash with Sweden’s election campaign.

As well as the nuclear threat, Medvedev warned that Finland joining Nato would force Russia to post more troops and weapons to its northwestern border with Finland.

“If Sweden and Finland join Nato, the length of the alliance’s land borders with Russia will more than double,” he said. “Naturally, these borders will have to be strengthened.”

As for Sweden, Medvedev said that Russia would have to “seriously strengthen the grouping of ground forces and air defence (and) deploy significant naval forces in the Gulf of Finland”.

Lithuanian Defence Minister, Arvydas Anusauskas, expressed bewilderment that Medvedev was threatening Sweden with a nuclear Baltic when it was common knowledge that it has deployed nuclear-armed Iskander cruise missiles in the Baltic exclave of Kaliningrad, since at least 2016.

“The current Russian threats look quite strange when we know that, even without the present security situation, they keep the weapons 100km from Lithuania’s border,” the minister said.

“Nuclear weapons have always been kept in Kaliningrad. The international community, the countries in the region, are perfectly aware of this. They use it as a threat.”