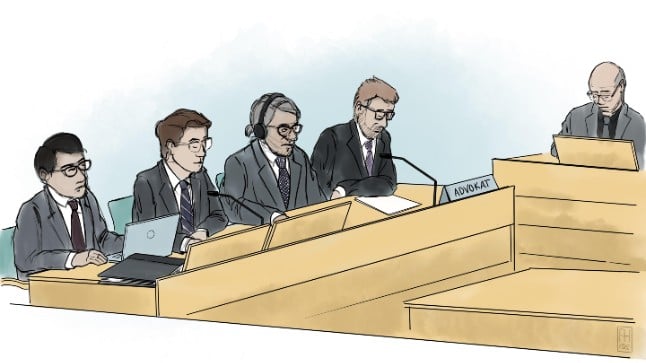 The disgraced Italian surgeon Paulo Macchiarini (centre in headphones) at the trial in Stockholm on Wednesday. Photo: Anders Humlebo/TT

Paolo Macchiarini won praise in 2011 after claiming to have performed the world’s first synthetic trachea transplants using stem cells while he was a surgeon at Stockholm’s Karolinska Institute.

The procedure was hailed as a breakthrough in regenerative medicine. But allegations soon emerged that the risky procedure had been carried out on at least one person who had not been critically ill at the time of the operation.

The 63-year-old appeared in court in a blue suit Wednesday, where he listened to translated audio as prosecutors listed the charges of “aggravated assault” against three patients.

The Karolinska Institute has confirmed that the three individuals have since died, but did not directly link the deaths to the operations.

“Macchiarini has carried out the surgery with complete disregard for science and tried experience,” prosecutor Karin Lundstrom-Kron told the court.

As prosecutors presented their case they referenced both external and internal reviews of the case, including one published in 2016 by physician Kjell Asplund, who argued that Macchiarini should never have been employed by Karolinska in the first place.

“It is clear that this method has not worked,” prosecutor Jim Westerberg said, adding that Macchiarini had embellished the benefits of the procedure.

Macchiarini, who took notes without showing much emotion, has maintained the operations constituted treatments and not experiments, and denied being criminally responsible.

“He contends that he has performed health care, cured and helped,” Macchiarini’s lawyer Bjorn Hurtig told AFP during a recess.

The prosecution’s presentation of evidence is expected to continue over several days so the defence will likely not be able to present its side until next week.

But Hurtig said they had “high hopes” they would be able to counter the prosecution’s evidence.

“There are quite a lot of gaps in that evidence and there is a lot of evidence that we argue are favourable to our view of things,” he said.

In 2013, the Karolinska hospital suspended all transplants and refused to extend Macchiarini’s contract as a surgeon.

A year later, several surgeons at the hospital filed a complaint alleging that Macchiarini had downplayed the risks of the procedure. Macchiarini carried out three surgeries at Karolinska University Hospital in 2011 and 2012, using an artificial windpipe made of plastic and coating it with the patient’s own stem cells.

Together with his colleagues, he performed a total of eight such transplants between 2011 and 2014, the five others taking place in Russia.

An external review in 2015 found Macchiarini guilty of research misconduct, but despite sacking him, the Karolinska Institute repeatedly defended him until 2018, when it found him and several other researchers guilty.

The university’s principal stepped down over the scandal, as well as a number of other people.

The trial, held in the Solna district court near the Karolinska Institute, is scheduled to take place over 13 days.