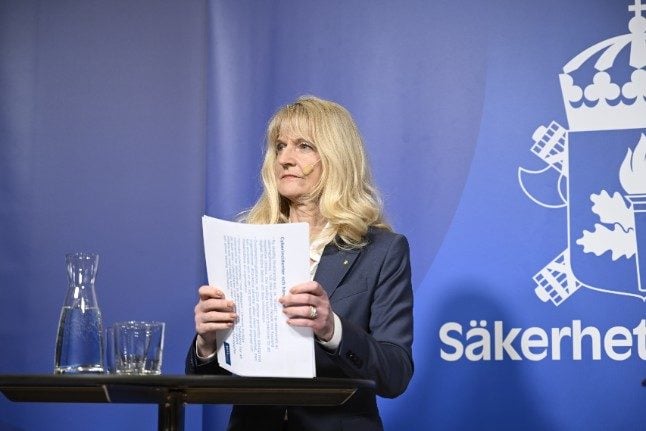 “Russia could at the current time realise that it has a limited window of time in which it can influence Sweden’s positioning on the Nato issue,” Säpo’s chief, Charlotte von Essen, said in a press release.

“How such a Russian influence campaign might look is hard to predict, but it could take place in many different arena simultaneously, in order to influence the media, public opinion, and decision-makers.”

Von Essen made her statement as she met with the heads of the Finnish and Norwegian security services in Helsinki.

The newly formed Swedish Psychological Defence Agency last month said there was no sign of an active Russian influence campaign in Sweden, going so far as to say that the country’s international propaganda operation seemed to have stopped functioning properly.

“We have seen them carry out particularly qualified influence operations against other country… people talk about ‘the Russian bear’ and that Russia is good at all this,” said Mikael Tofvesson, the agency’s chief at the start of the month. “Byt the Russian propaganda machine has not succeeded in standing against a counter attack. In some way, it’s whole handling [of the invasion] has broken down.”

Säpo, however, said it was braced for propaganda, noting that Russia has shown itself going as far as to launch military attacks to force other European countries to follow its will.

“The security police has intensified its work to reduce the room foreign powers have to manoeuvre and to strengthen the power those operations we have worth preserving have to resist,” von Essen said. “We are continuously carrying out measures to protect Sweden and are cooperating broadly with others, even internationally.

The presidency said the meeting “will be preceded today by a round of talks between Finnish, Swedish and Turkish officials hosted by Nato in Brussels.”

Russia’s invasion of Ukraine earlier this year saw the two Nordic countries abandon decades of military non-alignment by applying for Nato memberships in May.

But the joint membership bid, initially believed to be a speedy process, has been delayed by Turkey’s opposition to Finland and Sweden joining the alliance.

Ankara has accused Finland and Sweden, in particular, of providing a safe haven for outlawed Kurdish militants whose decades-long insurgency against the Turkish state has claimed tens of thousands of lives.

The Turkish leader has also called on Sweden and Finland to lift arms embargoes imposed against Turkey in 2019 over Ankara’s military offensive in Syria.

Erdogan signalled on Saturday that no progress had been made in Sweden’s bid to join Nato, urging Stockholm to take “concrete actions” to meet Ankara’s concerns, his office said.

Turkish officials said Ankara does not view the summit as a final deadline for resolving its objections.