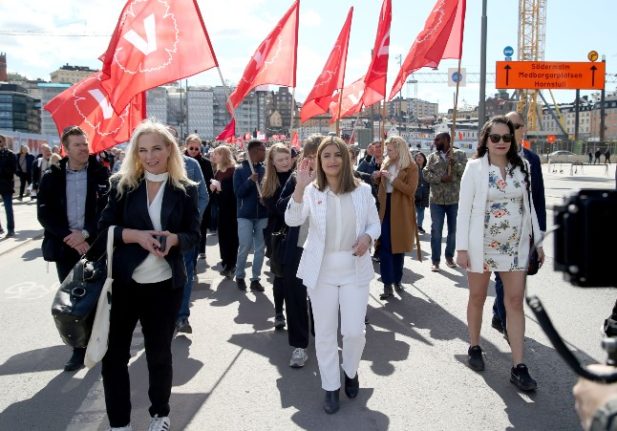 What have the Left Party proposed?

In a speech on May 1st, the Left Party made a pledge to increase pensions for the poorest pensioners in Sweden if they were to be elected in September.

Their new pledge would affect those receiving a guarantee pension, who would see their pension increase by 13.4 percent starting in 2024, if it were to become law.

According to the Left Party, this could increase the disposable income for a retired home care worker by up to 1,300 kronor per month, if passed.

This new pledge is in addition to a previous pension proposal due for debate in parliament, which would give pensioners on a guarantee pension up to 1,000 kronor extra per month in pension payments, starting in August, if it were to be approved.

Will these proposals ever become law?

Although the chances of the Left Party entering government in September are slim, that doesn’t mean that their pension reforms couldn’t become law.

Dadgostar has proven to be an effective negotiator, having already secured the prior proposal to increase guarantee pensions which is due for debate in parliament in return for backing Social Democrat Magdalena Andersson’s prime ministerial bid.

It would not be impossible for the Left Party to try to make their support for a Social Democrat-run government contingent on approving this second pension reform.

The first proposal still needs to be approved by parliament, and it is by no means certain that it will be passed.

It’s likely that this new pledge for pension reform would face a similar fate: if it even makes it to the proposal stage in parliament, it is by no means certain that it would be approved.

When asked by newswire TT on the chances of getting the Left Party’s pensions reforms through parliament, Dadgostar said that it is now “up to the other parties to make good on their word, following up on what they’ve said in the big speeches they hold about improving pensions”.

“This is a second step in improving pensions for all employees,” she added.

How could these proposals affect foreigners if passed?

It depends on a number of different factors. The Swedish pension system is complicated, and these reforms only affect one small part of it, the guarantee pension.

However, you only qualify for the full guarantee pension after 40 years of residency in Sweden, which is longer than many immigrants who came here as adults will have been living in the country by retirement age. The guarantee pension can only be paid out once you turn 65, so unless you arrived in Sweden before your mid-20s, you’re unlikely to qualify for the full amount.

Furthermore, the guarantee pension is the part of the Swedish pension pot designed to support those who have had no income, or an extremely low income, throughout their lives, meaning they may have no other pension to support them in retirement.

Most immigrants in Sweden have worked while living here, and many have had to earn over a certain amount in order to fulfil the requirements of a residence permit, so they will most likely have another pension fund such as a state or general pension, as well as a tjänstepension or occupational pension which will support them in retirement.

If you want more information on how the Swedish pension system works, have a look at these guides:

Essentially, though, these reforms are unlikely to affect you noticeably unless you’ve been in Sweden for over 40 years (or will have been by the time you retire), and have had no income or a low income during your life.