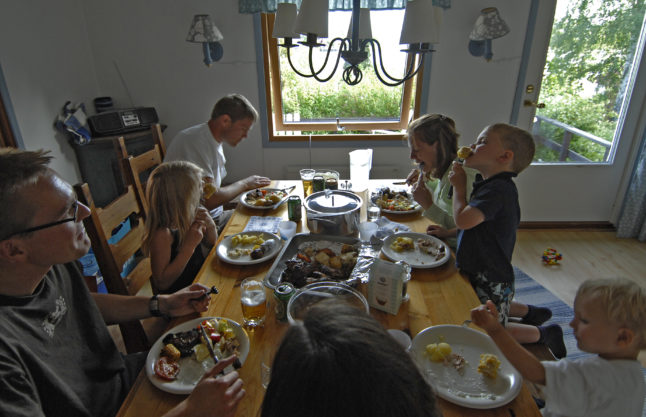 A family - and friends! - eat a meal together. Photo: Hasse Holmberg/TT

In a viral tweet, user @SamQari shared a screenshot of a post on Reddit with the question “What is the weirdest thing you’ve had to do at someone else’s house because of their culture/religion?”

Twitter users from all over the world reacted strongly to the tweet, stating that in their cultures, not feeding guests is the ultimate faux pas.

Some Swedes also mentioned this cultural difference, with one writing that they “grew up with 50/50 Swedish/immigrant friends”, and were always offered food by immigrant families, but were sometimes told to sit in the next room when they were visiting Swedish families.

Another agreed with this, saying that “it’s definitely not all Swedes, but it’s a Swedish thing”.

Respect for the child’s parents

Some Swedes defended the practice, stating that kids aren’t fed “out of respect for the visiting child’s parents who may have planned dinner which would then get wasted”, while others described it as “insane behaviour” that kids on playdates are told to wait in another room while the host family eats, even going as far to say that the practice “should die out in Swedish culture”.

One Twitter user replied that they had never experienced this growing up in Sweden and didn’t know anyone who had, but others said it was “normal” not to feed a child visiting for a playdate.

Another stated that, although they had experienced this growing up, the practice seems to have died out somewhat, with their children never being told to wait in another room while the host family ate.

One said that they always offered food to their children’s friends and would continue to do so, despite sometimes getting criticised by the friends’ parents for not serving the right kind of food – such as organic food, or meat or fish if the family didn’t eat that at home.

Another said they always ate together with any friends who were visiting – although one friend always declined the offer as his parents “didn’t allow it”.

But why is it so odd for some Swedes to feed their children’s friends who are over for playdates?

In general, Swedes prefer visits to be planned in advance – and that applies to all social events, not just playdates among children.

This practice reflects that, with one Twitter user saying that Swedes “cook for the amount of people that are expected to join a meal”, and that guests wishing to join for dinner must let a host know well enough in advance that they can get and cook enough food for an extra person.

We cook for the amount of people that are expected to join a meal. Usually this is only for the household. If you wanna come over for dinner, then that is no problem, but you must let it be known in advance so that the host has enough time to get food to cook for an extra person.

Swedes often meal plan for a whole week, buying just enough food they think they will finish so as not to waste food. This means that, in many families, the meals for the week are often decided days in advance, meaning that social events involving food must be added to the plan early to ensure there is enough food for everyone.

Dinner together is important family time

Another reason why some Swedes wouldn’t feed a visiting child is that it is considered unusual for a family not to eat their evening meal together. For some, there is an underlying expectation that all families eat dinner together at 6pm, and that children should go home to their own families to eat the meal their parents have prepared for them in advance.

Twitter user Staffan Gunnarson explained that this was the case when he grew up in the 70s in a small town in Sweden, adding that there was never any question over whether children would eat at home, and that it was only in rare circumstances – such as at a party – that children would eat somewhere else.

Many children lived a short walk or cycle away from their friends, so it wasn’t particularly difficult to nip home for tea at 6pm and then come back to their friend’s house later.

He added that children would obviously be offered food if they were hungry, unable to go home or if their parents were unable to make food for some reason, but that this was the exception rather than the rule.

He also stated that there was no lack of respect or care behind this – people just weren’t interested in eating dinner with another family. He added that, as a child, he enjoyed sitting in his friend’s room listening to music or reading comics alone while the family ate, and didn’t realise others found this aspect of Swedish culture odd until much later in life.

Another point Gunnarson made in defence of the practice is that the type of food Swedes have traditionally eaten is perhaps not as easily scalable.

Unlike other cultures where it is common to serve a large stew with rice or another form of carbohydrate which can be easily shared for the evening meal, he argues that many Swedes would traditionally have bought a piece of meat and a couple of potatoes per person, making it difficult to stretch the meal to feed unexpected guests.

Another Twitter user said that, in Sweden, it’s “deeply shameful” to take food from others if it means that they would have to eat less than they had planned to, which could be another reason why, traditionally, children have been expected to eat with their own families.