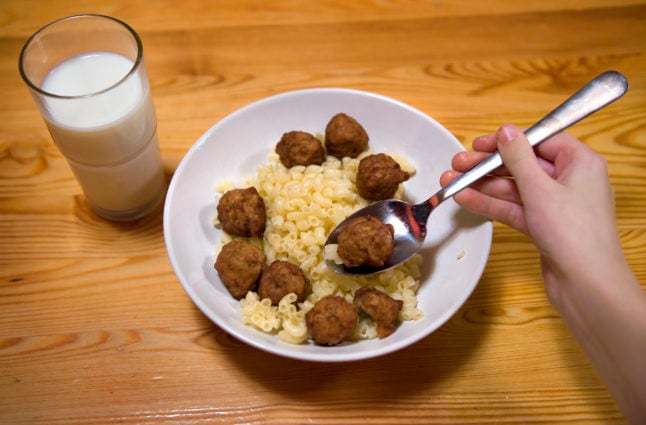 Swedish everyday food is "good enough for the family, but not good enough to offer outsiders," says Lotta Lundgren, who believes Swedes prefer advance notice so they can cook to impress. Photo: Claudio Bresciani/SCANPIX

For those without social media accounts or access to a smartphone, #Swedengate is the so-called “Twitterstorm” that broke out this week after someone posted a screenshot of a Reddit discussion in which a user describes being made to wait in his Swedish friends’ bedroom while the family ate their evening meal.

As Swedish Twitter users weighed in to variously dismiss the phenomenon as a myth, confirm it, or (most entertainingly) defend it in unintentionally revealing ways, the subject exploded on Twitter.

The world’s newspapers and TV channels, like vultures searching for carrion, then swooped in to whack out viral stories. UK newspaper The Guardian’s Pass Notes article here pretty much nails it.

But for observers of Swedish culture, it’s the Swedish media’s own coverage that has been the most entertaining.

Sweden’s state broadcaster SVT wheeled out TV presenter and cookbook author Lotta Lundgren, to comment on the story. Lundgren has also previously featured on SVT series Historieäterna, an “infotainment” show which explored the history of food throughout Swedish history.

Lundgren argued, with utmost (and unusual, for her) seriousness that Swedes’ failure to feed their kids’ friends came down to insecurity.

“Firstly, it’s about insecurity,” she said. “What we in our family eat every day is good enough for us but not good enough to feed to others outside the family.”

This is changing today, she goes on, as people from outside the family are now invited to eat, so long, that is, that it is all planned in advance, so that hosts have time to put in the effort to impress.

“We just want it to be planned, and then when we do it, it’s a party, and we bring out the barbecue, and have actually read a recipe, and we put in a bit of an effort — then it’s fun to invite people to eat.”

SVT’s commercial rival TV4 brought out the food historian Richard Tellström (who also featured on Historieäterna), who blamed Sweden’s history as a land of “free farmers”, with no collective agriculture and long winters.

“We’ve always had an individualist culture in Sweden, we’ve never had collective agriculture and shared food and such like,” he says. “If you’ve done well in your farming, then that’s your success, and if I’ve failed, that’s because I’ve offended God or something.”

Swedish people also historically had to rely on just one harvest, storing it and making it last through the long winter.

“Food shortages in this country lasted up until the 19th century, so giving away food is not something we have been able to do, as you might expect to do in countries which have several harvests in a year,” he says.

Finally, he blamed Swedes’ general discomfort with indebtedness. “If children come home and eat at yours, then I end up in debt to you, and the whole situation with children and parents and ending up in debt, that’s complicated for us Swedes.”

Svenska Dagbladet’s Ledarreaktionen podcast devoted a whole episode to the phenomenon, which the presenter Andreas Karlson ended by discussing what sort of information campaign the Swedish government could run to counter the bad publicity.

“I suppose there won’t be a Swedish information campaign showing well-fed children”, he says (at least partly joking).

In the podcast, the journalist Paulina Neuding, whose parents fled from communist Poland, remembered discussing the phenomenon with the Swedish etiquette expert Magdalena Ribbing when the issue last flared up about ten years ago.

“She said it was about respect for the plans of other families, to not disturb other families, put quite simply. Those were her thoughts – that it wasn’t stinginess, which I don’t think it is either. It’s respect for boundaries. It’s about the traditional Swedish view of where boundaries are for interaction. It’s about the private sphere, and the family, the home, food, and the kitchen table. You can step on someone else’s feet if you feed their children.”

The Local also discuss this in our most recent episode of our Sweden in Focus podcast, released on June 4th.

Perhaps the funniest article was the one in Dagens Nyheter by Andreas Hörmark.
He was one of the few voices to explain the phenomenon as stemming not from a form of considerateness but from the fact that Swedes are “a little bit stingy, and maybe don’t have great social skills”.
“Just the fact that we were among the first countries in the world to develop a service like Swish indicates this: an app designed to make it simple to divide up every little bar bill, which is even equipped with a function that makes it possible to ask someone to send you money without even addressing them directly.”
As if this wasn’t enough, the Swish app even includes a built-in calculator to enable users to calculate the debt they are owed down to the individual öre.
Anyway, he points out, kids nowadays have so many weird food requirements that it’s probably safe to invite them to come and eat, as they will almost certainly say no.
And in the unlikely event that they do wolf down a plate of your finest meatballs with macaroni, you can always send their parents a Swish request, he says.
Is he joking? Probably.
Although, the Stockholm University lecturer Ian Higham, whose Twitter thread alerted us to some of the examples in this article (and from whom we more or less stole the intro) thinks not.