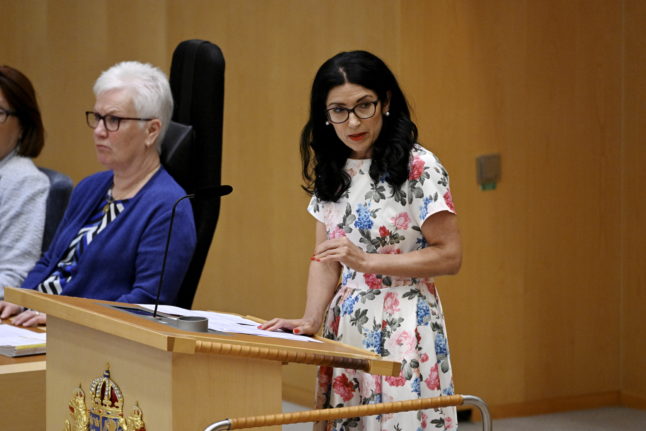 What has Sweden’s ruling party done?

Sweden’s Social Democrats confirmed on Tuesday that the government will stick to the deal struck in November with the independent MP Amineh Kakabaveh to help Kurds in northern Syria.

As a result Kakabaveh is abstaining in the no-confidence vote called by the Sweden Democrats against justice minister Morgan Johansson, meaning it has not passed and Johansson can stay in place.

Why is Sweden’s ruling party in talks with a single MP?

Sweden’s parliament is so evenly split between left and right that Magdalena Andersson was voted in as Prime Minister in November by a single vote.

The decisive swing vote was held by a Amineh Kakabaveh, an MP who was ejected from the Left Party in 2019 to become an independent. Kakabaveh had clashed with her party over her strong views about the oppression of women in immigrant communities, due to strict application of Islam, or due to other cultural reasons.

In exchange for her vote, she won a commitment from the Social Democrats to “deepen their cooperation” with PYD, the leading political party of Syrian Kurds, which controls The Autonomous Administration of North and East Syria.

“The PYD political party has a crucial role in the autonomous administration and represents a legitimate negotiating partner,” the agreement reads, which is signed by Tobias Baudin, the Social Democrat’s party secretary.  “That freedom fighters who have fought with or sympathise with YPG/YPJ or PYD are classed by certain countries’ actors as terrorists is unacceptable.”

The agreement also touches on Turkish domestic politics, calling for Selahattin Demirtaş, the former leader of the left-wing pro-Kurdish Peoples’ Democratic Party, to be released from pre-trial detention. Demirtaş has been held since 2016.

Turkey sees the PYD as identical with the PKK, the militant Kurdish party classed as a terrorist organisation by the EU and the US, as well as Turkey.

In the demands Turkey published last month, it repeatedly referred to “PKK/PYD”, as a single entity. Turkey is also demanding that Sweden cancel the $376m in funding it has promised the Kurdish government in northern Syria, and that it stop supporting and meeting PYD representatives, both living in Sweden and in Syria.

Maria Lemne, a politics professor at Södertorn University, told the DN newspaper that if the Social Democrats are committed to their deal with Kakabaveh, “then we can definitely say goodbye to the Nato negotiations”.

Why are the Social Democrats willing to sacrifice the Nato talks?

“I would speculate that the government must have decided that Turkey isn’t going to budge, at least until after the election,” argues Nicholas Aylott, associate politics professor at Södertorn.

This, he argues, means that the damage the Social Democrats judged they would suffer from harming the Nato negotiations probably appeared less than that they would see from sacrificing a minister and appearing to cave in to the political opposition.

Reneging on the deal with Kakabaveh and cutting funds to the Kurds would also, he suggests, have anyway “inflamed feelings within the Social Democratic Party at making concessions to a foreign authoritarian government”.

Moreover, it may not even have been enough to win Turkey’s backing for a Swedish Nato membership, given that Turkey has also been demanding that Sweden extradite 33 people living in Sweden who it claims are linked to the PKK, YPG, or else to the Gülenist movement.

“Maybe the price that Turkey is demanding is so high that the termination of the government’s deal with Kakabaveh wouldn’t satisfy the terms in any case,” Aylott continued.

As an independent, Kakabaveh will cease to be an MP after the election on September 11th. If the Social Democrats manage to remain in power, they will then be more open to negotiate with Turkey.

How will the decision to stick to the deal backing the Kurds affect the coming election?

Aylott believes that the opposition parties stand to benefit.

“My spontaneous feeling is that this gambit, which even the centre-right newspapers were a little bit surprised and lukewarm about, has paid off for the opposition quite well,” he said.

“It put the Social Democrats in a difficult position where they either had to sacrifice one of their most experienced ministers and thereby draw attention in the run-up to an election campaign to the government’s failures on law and order.”

“They have also put the Social Democrats in a situation in which they can be accused of playing internal political games, and thus risking the Nato application.”

What have the opposition parties been saying today?

They have been using the no-confidence debate to reiterate their claims that the Social Democrats have failed in the battle against crime.

“There are still voices arguing that it would be irresponsible to topple Morgan Johansson, that the timing is wrong,” said Henrik Vinge, the Sweden Democrats’ group leader in the parliament. “But every day that Morgan Johansson remains in place as Justice Minister is a lost day in the fight against criminality. Nothing could be more irresponsible than letting that continue.”

“Morgan Johansson’s eight years have been a catastrophe when it comes to fighting severe crime,” said Moderate leader Ulf Kristersson. “He is not doing his job. He should resign.”

How have the Social Democrats been fighting back?

Primarily by depicting Ulf Kristersson, the Moderate Party’s leadership as irresponsible for backing the no-confidence motion. The party has also accused Kristersson of now following the lead set by the populist Sweden Democrats.

“I don’t think that they [the Swedish people] are so impressed by this type of chaotic behaviour,” finance minister Mikael Damberg, said ahead of the vote. “This also shows the weakness of the opposition leader. It seems that it’s not him who is leading all this, but [Sweden Democrat leader] Jimmie Åkesson instead. In the best case, the Moderate leader is playing third fiddle in this spectacle.”

The party propose a high-cost protection or högkostnadsskydd similar to that found in Norway, where the state would cover a percentage of all costs over a certain figure.

It’s not clear how the system would be work, but the Moderates’ finance spokesperson Elisabeth Svantesson provided a possible example.

“You could expect the state to pay for 75 percent of the cost of everything over one krona per kilowatt hour,” she said.

Her example would mean cutting around 6,000 kronor off the energy bill for a family in Norrland.

“No one should be forced to leave their home this winter because of an electricity bill,” she said.

The cost to the state, if this model were to be adopted, would be 15 billion kronor for a three-month period.

In addition to this, the Moderates are pushing for expansion of Sweden’s nuclear power production, as well as increasing the discount on building solar panels from 15 to 20 percent.

Svantesson also proposed that this discount be expanded to include other environmentally friendly alternatives, such as the installation of air source heat pumps.

“It would both lower electricity consumption and increase electricity production,” she said.