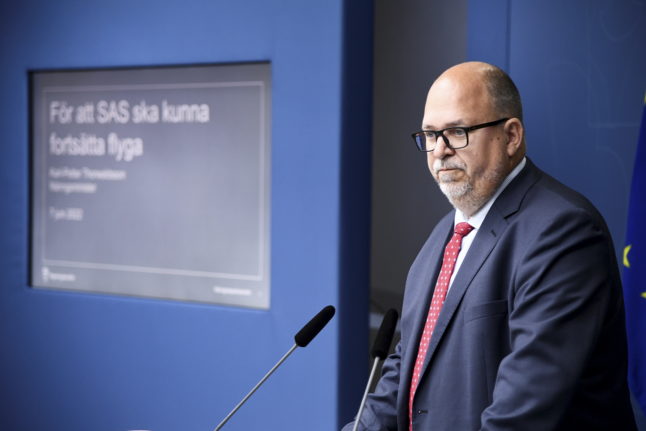 Business minister Karl-Petter Thorwaldsson at a press conference in Rosenbad. The slide behind him says "So SAS can continue flying". Photo: Lares Schröder/TT

“The state are not planning on putting more money into SAS in the future. I don’t think we can be more clear than that,” business minister Karl-Petter Thorwaldsson told a press conference.

On June 7th, Thorwaldsson told a press conference that the state would not be contributing funds to the airline’s rescue plan.

“We’ve supported SAS with over 8 billion kronor in the last few years. But you have to draw the line at some point and we believe there are other state expenses which are more important than continuing to invest in an airline,” Thorwaldsson told newswire TT.

SAS stocks dropped a further 10 percent on the Stockholm exchange following the news, with one stock now costing 69 öre.

However, the state will contribute towards converting the airline’s debts into equity.

“The company has stated that it needs to reduce liabilities corresponding to 20 billion kronor and now we have covered our share of 4 billion. Now it is up to SAS to get other lenders to work with this plan as well,” Thorwaldsson said.

SAS leadership responded in a press statement, welcoming the government’s decision to assist the company in converting liabilities to equity. SAS leadership also thanked the Swedish state for the help they have been given in the past, even though they will not receive more funds in the future.

Thorwaldsson underlined the fact that the airline has received 8.2 billion kronor from the government since 2000, with the latest cash injection during the pandemic.

Sweden and Denmark are SAS’s main shareholders, with each holding 21.8 percent stakes, which rose in the past two years following rescue plans linked to the Covid pandemic.

He further repeated the government’s previous standpoint that they would not be a long-term owner in SAS, saying that this statement was a step towards that goal.

A previous argument for the state bailing out SAS has been that flight transport is important for Sweden’s infrastructure. However, according to Thorwaldsson, the need for a state-owned airline has now decreased.

“When SAS was founded 60 years ago, there was often only one airline in each country,” he said.

“Today, there are many airlines flying both domestically and internationally. So it’s obvious that in that respect, it’s no longer as essential to have a state-owned airline.”

Despite this, Thorwaldsson was positive about the future of the company, saying that if they can achieve their rescue plan, they have good chances of becoming a competitive airline.

“If they can achieve the Forward plan, that’s a way of producing a competitive SAS,” he said.

“So I still believe there’s a reason to be positive about SAS’s future.”

93 percent of the Danish SAS pilots have voted yes to an agreement which ended strike action but also means, among other things, redeployments, longer working weeks and lower wages.

This was announced by Dansk Metal on Saturday morning. The pilots could have voted yes or no on the new collective agreement until midnight on Friday evening.

“So of course it was exciting how our members viewed the new collective agreement. But they could also see that it was a necessity in relation to SAS’s situation,” he added.

The agreement comes after months of tug-of-war that finally saw SAS and the striking pilots reach a collective agreement on 19 July. It helped end a two-week strike.

Part of the background to the conflict between SAS and the pilots was that, during the COVID-19 pandemic, SAS dismissed around half of its pilots.

With the new collective agreement, however, all 450 dismissed pilots will be offered re-employment in the future.

At the same time, SAS pilots will see a 25 percent pay cut, and the limit for the workload is raised from 47 hours to 60 hours per week.

But even with strike action over and a collective agreement supported by pilots, the problems are far from over for SAS, which has suffered major financial losses during the conflict.

Currently, the airline plans to begin a reconstruction in the United States under bankruptcy protection in a so-called Chapter 11 process.

Bankruptcy protection will mean that SAS can continue to operate and pay wages while the process is ongoing.

SAS is seeking financing of up to $700 million- slightly more than DKK 5.1 billion.

SAS press manager Alexandra Lindgren Kaoukji said in a statement: “We are very happy and look forward to continuing our ongoing Chapter 11 process and our work to ensure a strong and sustainable airline for many years to come.The positive result of the vote will help SAS to attract long-term investors while we go through the Chapter 11 process and work further with the SAS Forward plan.”