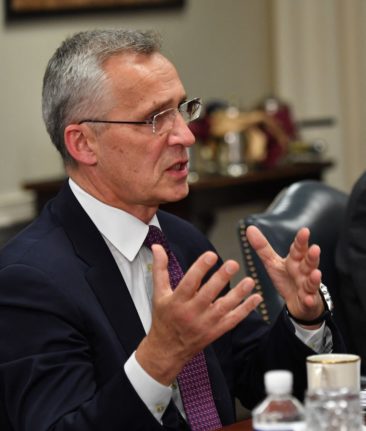 Turkey’s blockage of Sweden’s and Finland’s NATO membership bids may not be resolved in time for the alliance’s summit later this month, NATO chief Jens Stoltenberg said Sunday.

He said NATO was “working hard” to resolve “legitimate” issues raised by Turkey. Stoltenberg had previously insisted that the two nations would be welcomed “with open arms,” but Turkey has thrown a spanner in the works and blocked their bids.

Ankara accuses them of providing a safe haven for the outlawed Kurdistan Workers’ Party (PKK), listed as a “terrorist” group by Turkey and its Western allies. “I would like to see this solved as soon as possible,” Stoltenberg said during a joint press conference in Finland with Finnish President Sauli Niinisto on Sunday.

However, “the summit in Madrid was never a deadline,” he added. Earlier in June during a visit to Washington, Stoltenberg said his “intention” was to have the issue sorted out before the meeting due to begin on June 28. Stoltenberg conceded Ankara had raised “legitimate concerns.”

“This is about terrorism. It’s about weapons exports,” he said. “We have to understand and remember that no other NATO ally has suffered more terrorist attacks than Turkey. And also that Turkey is an important ally with a strategic geographic location,” he stressed.

Sweden, and Finland in particular, have historically tried to steer clear of angering nearby Russia but shed their reluctance to join NATO after Moscow’s invasion of Ukraine — which had unsuccessfully sought to join the alliance.

Any NATO membership deal must be unanimously approved by all 30 members of the alliance. The two Nordic countries have repeatedly expressed surprise at Turkey’s objections, saying Ankara had conveyed support for their membership bids until they submitted them.

“We have been surprised by the position of Turkey,” Niinisto reiterated on Sunday, stressing that Helsinki was taking the concerns “seriously.”