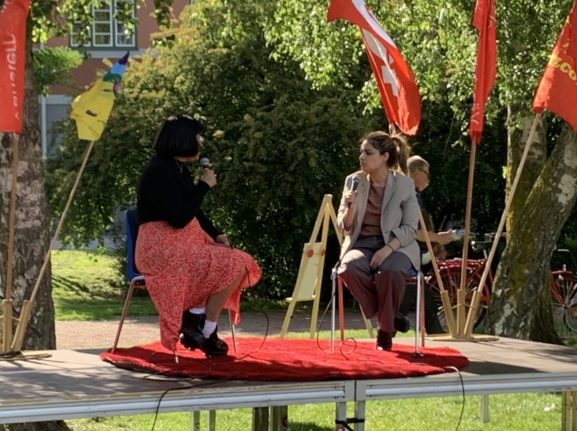 The sun is blazing down on the “Nooshi Festival” at Jesusparken in Malmö’s Möllevången district, and a small crowd has formed around Nooshi Dadgostar, the Left Party’s leader, who has just finished a Q&A session and is mingling with the public to take selfies and answer questions.

The location for the event is no coincidence. This is one of the party’s main strongholds, with 45 percent of the constituency voting for the Left Party in 2018, and a further 29.5 percent voting for either the Social Democrats or the Green Party.

Since becoming the party’s leader, Dadgostar has proven herself to be a tough negotiator, toppling Sweden’s then-Prime Minister Stefan Löfven in a no-confidence vote just seven months after she was appointed, following a disagreement over proposals to change Sweden’s rental laws.

Löfven was re-elected, but not before the proposal in question was scrapped, giving the Left Party a jump in the polls.

She employed the same tactic in 2021, when Magdalena Andersson was on the cusp of becoming Sweden’s first female prime minister, with the Left Party refusing to back Andersson’s candidacy until she agreed to more generous pensions.

Her tactic paid off again – the Left Party backed Andersson, but only after it had secured the pension reform it wanted.

“It’s about democracy,” Dadgostar tells The Local in the third of our pre-election party leader interviews. “Half a million Swedes have voted for us, and my job is to stand up for those voters and represent them in the best way I can.”

Although born in Sweden, Dadgostar’s parents fled to the country from Iran in the early 1980s due to political persecution. When Dadgostar was born in 1985, her family were living in an asylum centre in Perstorp, in the southern region of Skåne.

The Left Party are popular among immigrants, and they have the highest percentage of foreign-born MPs of any party in Sweden – 32 percent. However, Dadgostar is quick to underline the fact that her party work not just for immigrants, but for everyone in Sweden.

“Everyone born outside Sweden is different, obviously. We work for them and we work for those born in Sweden, because they need the same things,” she says.

She underlined the importance of creating jobs – which is not a surprise considering the Left Party’s roots in the socialist workers’ movement – adding that the workplace also provides an ideal situation for immigrants to practice Swedish.

“Then, we’re going to tie education to them, so you can quickly get on to a course tied to a job. And then you need to practice the language as well, doing that in the workplace is almost the easiest way to do that. So the most important thing for us is to create new jobs, and then the Public Employment Service needs to be better, so that door is open, so to say.”

“We want to increase equality,” she adds. “We think there’s too much xenophobia in Sweden and we want to tackle that.”

The crowd in Malmö is a mix of left-wing ethnic Swedes and first and second generation immigrants like Dadgostar, although most, the immigrants included, seem drawn from the university-educated radical left rather than the left of unions and industrial workers.

Children wait impatiently to get their faces painted while their parents browse stalls selling books, pins and T-shirts with left-wing, anti-capitalist slogans. On the other side of the park, non-profit worker’s cooperative Rönnebygatans Ekolivs sells organic, locally produced refreshments.

The Left Party received just over 518,000 votes across Sweden in the 2018 election, winning eight percent of the vote. This makes them Sweden’s fifth-largest party, after the Social Democrats, the Moderates, the Sweden Democrats and the Centre Party.

Under Dadgostar, the party has sought to appeal to working class Social Democrats unhappy with the compromises the party has made to win the support of the economically liberal Centre Party.

In the park, activists hand out copies of a party newspaper – Vänstern på jobbet (“The Left at work”) – featuring Dadgostar in a hi-vis jacket and a hard hat. A headline reads “a party for workers”. 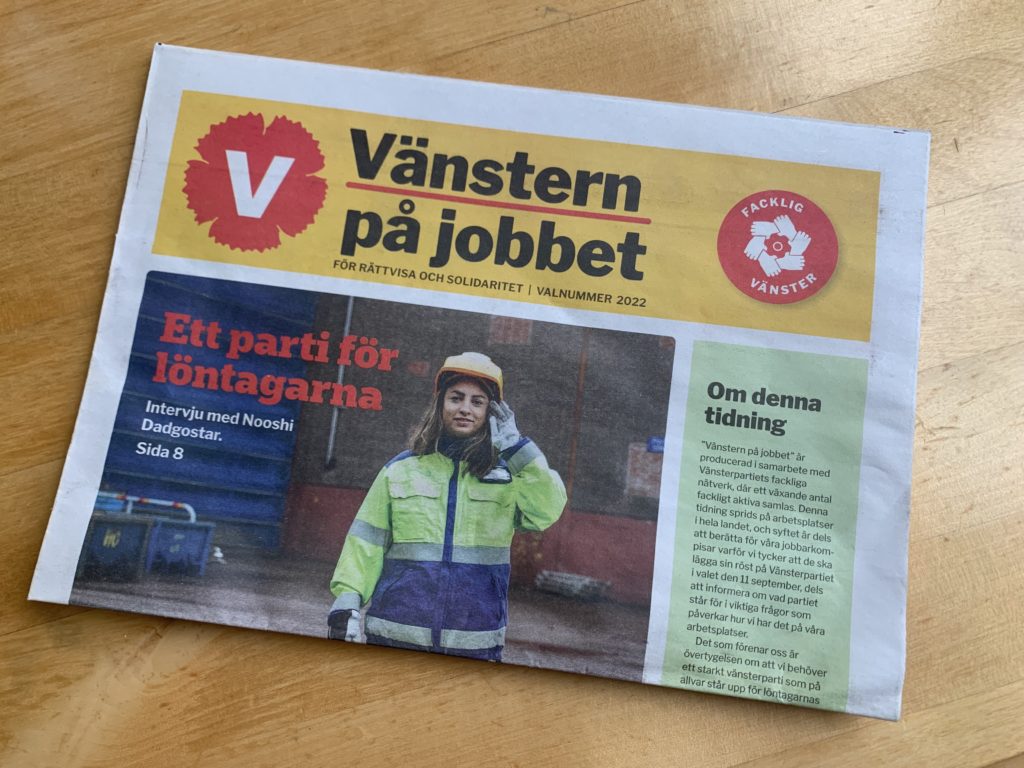 Doing this has meant some sacrifices on environmental policy. Despite wanting to tackle climate issues, the Left Party’s environmental initiatives have been criticised for not going far enough in an independent study carried out by the Swedish Society for Nature Conservation, who said that “during the latter part of the [2018-2022] mandate period, the environmental profile of the party has weakened”.

“For example, the Left Party has made environmentally harmful proposals to lower tax on petrol and diesel,” the report states, adding that “during the last year, the party has wavered in its environmental policy, the tone has shifted and in some cases the party has even acted in the exact opposite direction.”

This hasn’t gone unnoticed amongst Left Party voters either. One self-proclaimed former Left Party voter stormed the stage following Dadgostar’s Q&A in Malmö, demanding that emissions be reduced by 20 percent in the coming year.

“It has to happen now, not at some far-off point years in the future,” she shouted, before lying across the front of the stage and refusing to move.

“That’s right!” was the reply from somewhere in the audience, followed by a brief smattering of applause.

The second issue on which the party has been seeking to appeal to the industrial, union-dominated left has been on work permit reform.

The Left Party is one of the three parties in favour of reintroducing arbetsmarknadsprövning: a system in which work permits would only be offered to those applying for jobs where there is a national shortage of applicants.

The ruling Social Democrats, who are also in favour of arbetsmarknadsprövning, announced plans to introduce a salary limit for work permit applicants a couple of days prior to this interview. They join the Moderates, the Christian Democrats and the Sweden Democrats in pushing for a salary limit, something which the Left Party are against.

“We think it would be best to introduce arbetsmarknadsprövning,” Dadgostar says. “The unions should be more involved – they can also assess whether there’s a labour shortage.”

The Left Party has received criticism for this from those arguing that it would make it more difficult for immigrants to move to Sweden for work, but Dadgostar believes that this policy would protect immigrants from poor working conditions.

“The reason for this is that we don’t want people to be exploited,” she explains. “It’s very important for us that you, as an immigrant, get the salary you’re entitled to. No one should be deceiving you. The problem for lots of people is that they get a certain salary, but then have to pay it back, and we don’t accept that.”

In the run up to Sweden’s election in September, one of the issues in which Dadgostar’s party is an outlier is in their stance on Nato. Along with the Green Party, the party is opposed to Sweden joining the alliance.

However, Dadgostar dismisses the suggestion that this is designed to attract anti-Nato Social Democrat voters in the election.

“No,” she says, “It’s because Sweden is much more secure as a country where we can decide on our own defence policy. We don’t view working with Erdogan as improving Sweden’s security.”

Dadgostar has been critical of Sweden’s Nato application on a number of occasions, describing it on SVT’s Aktuellt as putting Sweden in a “dependent relationship with an authoritarian regime”.

“Erdogan is persecuting his own people, imprisoning opposition figures and waging war on neighbouring countries,” she told SVT. “He has ended up in a position where he can blackmail us – it’s very serious.”

Dadgostar’s aides begin to circle as our interview nears its end. The crowd of people waiting to take selfies with her is growing, and in typical Swedish fashion, they want to make sure that everyone gets their turn and that no-one is jumping the queue.