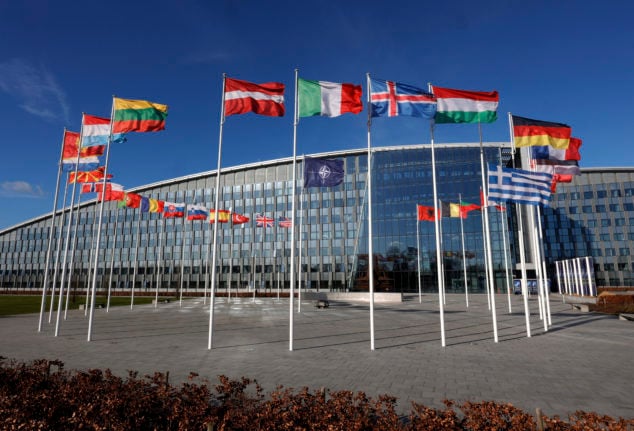 Flags flutter in the wind outside Nato headquarters in Brussels. Photo: AP/Olivier Matthys

Ambassadors from Nato’s 30 member states were on Tuesday expected to sign the accession protocols for Sweden and Finland, opening a months-long period for alliance countries to ratify their membership.

In the wake of Russia’s invasion of Ukraine in February, Sweden and Finland in parallel announced their intention to drop their military non-alignment status and become part of Nato.

A Nato summit in Madrid last week endorsed that move by issuing invitations to the two, after Turkey won concessions over concerns it had raised — and a US promise it would receive new warplanes.

Turkish President Recep Tayyip Erdogan had accused Sweden and Finland of being havens for Kurdish militants he has sought to crush, and for promoting “terrorism”.

He also demanded they lift arms embargoes imposed for Turkey’s 2019 military incursion into Syria. But Erdogan kept the rest of Nato on tenterhooks by saying he could still block Sweden and Finland’s bids if they failed to follow through on their
promises, some of which were undisclosed, such as possible extradition agreements.

Sweden’s Linde tweeted that she was going to Brussels on Monday for the talks at Nato headquarters and would attend the ambassadors’ signing on Tuesday.

A Finnish diplomat confirmed that Haavisto was also in the Belgian capital for the talks and Tuesday’s signing.

The two foreign ministers were to give a media conference with Nato chief Jens Stoltenberg on Tuesday.