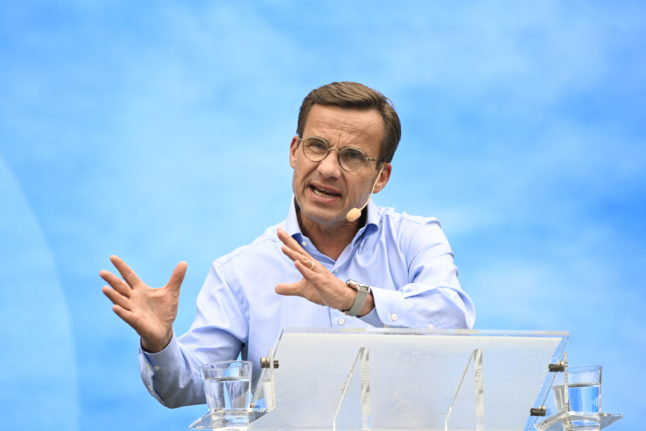 Speaking as light rain came down on the audience at the Almedalen political festival on the island of Gotland, Kristersson sought to give a more positive, forward-looking speech than normal, where he celebrated the victories his party had achieved in opposition, and pointed to what they would do in power, rather than accentuating the country’s problems with gang shootings.

“What I can’t live with is that many people seem to have lost faith that it is even possible, the feeling that politics has the tools, the ability and even the will to pick up and mend what it broken,” he said. “That a Sweden that isn’t working has become the new normal.”

“It’s not true,” he continued. “Because of course it’s possible to get good things done, just look at the evidence from the past few days.”

All these issues had one thing in common, he argued: “The Moderates. We showed the way, we put together the majority, we made sure it became political reality.”

Then he moved on to the coming election, saying that in his view it would be all about the cost of living.

“On September 11th, we are going towards a plånboksval [literally, a “wallet election”], he said, before accusing what he called vänsterkartellen, the “left-wing cartel”, of making no fewer than 46 tax rises during their last four years in power.

“We are going to campaign in this election on a pledge to stop to all tax rises. No new taxes will be brought in, and the overall tax burden will not rise, until we know that all the taxes we are paying a really going towards what they should be.”

He warned that the Social Democrats, and their Left Party allies, were preparing a long list of new taxes. “Now the left-wing cartel have tasted blood, they are waving about a new wish list,” he claimed.

He said they were planning new taxes on people’s savings, on car owners and on the very highest earners, a new wealth tax, a lower tax break for employing cleaners and other household services, and even to bring back property taxes.

Kristersson promised that his party would bring in none of these, and would even cut some taxes, promising to reduce the tax savers pay on their ISK share portfolio accounts, and the reduce the amount of biofuels required to be blended with petrol and diesel, so lowering fuel prices.

He was particularly dismissive of the Social Democrats’ plan for a special tax to fund the rearmament of Sweden’s military.

“This really provokes me, because I thought that defence and police, healthcare and schools, should be the very first thing you spend your tax money on.”

The Moderate Party’s leader rolled out the old formulation about being “tough on crime, but also tough on the causes of crime”, but rather than blaming crime on poverty or inequality, he blamed “welfare dependency, school failure, and the lure of easy money”.

Under his government, he said, punishments would be doubled, or even quadrupled in some cases.

He got the biggest round of applause of the speech when he turned on Sweden’s justice minister Morgan Johansson, who recently narrowly survived a no-confidence vote in parliament.

“One thing, I can promise 100 percent,” he added. “If I lead a right-wing government, it’s not going to have a justice minister like Morgan Johansson.”

Perhaps the most controversial passage in his speech came when he praised the Christian Democrats and the Sweden Democrats, two of the three parties whose backing he will need to form a government.

“Apart from the Sweden Democrats,” he said, “no other party has stood up — completely against the current — for the idea that we cannot increase immigration if we are going to have a chance of pulling off integration.”

At that point, someone in the audience next to where The Local was standing immediately left.

For the finale, he returned to more upbeat, forward-looking language with which he had begun the speech, promising “A Sweden of freedom, security and possibility”, “the Sweden of a hopeful future”.

“We can bring order to Sweden,” he declared. “I can hardly wait.”

You can read the full speech in Swedish here, and in English (Google Translation) here.