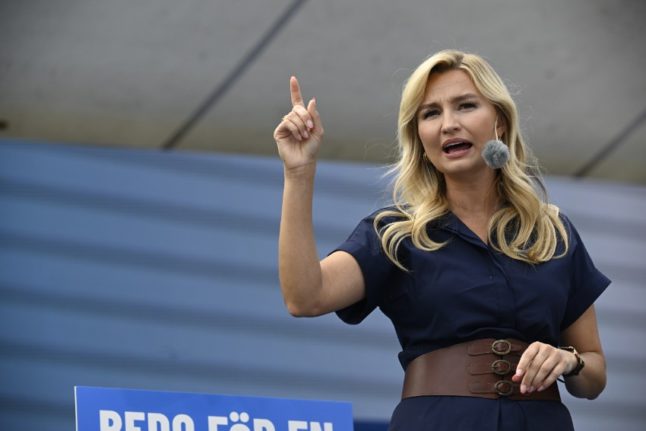 The Christian Democrats are seeking to lure voters for the Centre Party in the the Swedish countryside and beyond, who are uncomfortable with its move to the left-side of Swedish politics, and its neglect of the rural issues it championed when it was Sweden’s farmer’s party.

“A vote for the Centre Party is in practical terms a vote for the Green Party,” Busch said in her speech at the Almedalen political festival in Gotland.

“A vote for Annie Lööf is a vote to give Stenevi and Bolund influence over hunting, forestry, wolves, agriculture and the price of fuel. We Christian Democrats want to offer everyone who previously voted for the Centre Party a new home.”

She said that the Center Party had “swapped tractors for electric scooters”, and become a party of urbanites.

“If you voted for the Centre Party before, vote this year for the Christian Democrats. We’re the party fighting for your right to live the typical Svensson-life outside the city centre.”

The Svensson-life was the theme running through the speech, with Busch arguing that it had got harder and harder for ordinary Swedes to provide this basics of a middle class life for themselves, a situation for which she laid the blame squarely on the Social Democrats.

“We’ve ended up with Magda prices for electricity, petrol, food, and now interest rates. It’s estimated that an average two-child family will see their costs rise by 50,000 kronor this year and next year,” she said.

The solution, she argued, was to vote in Ulf Kristersson, the Moderate Party’s leader, as prime minister.

“There is an alternative, with Ulf Kristersson as Prime Minister, which is agreed on the solutions on all the difficult questions. That’s why I want to also appeal to those of you who usually vote for the Social Democrats. In this election, lend your vote to the right-wing parties.”

You can read the speech here in Swedish or in English (Google Translated) here.

The Local will as always cover the Swedish election from the point of view of international citizens living in Sweden.

In our Sweden Elects newsletter, our editor Emma Löfgren will take a look every week at the issues that affect you; the biggest talking points; the whos, hows and whys; and several extra features just for paying members (you can find out HERE how to receive the newsletter to your inbox with everything included, and membership also gives you unlimited access to all of The Local’s articles).