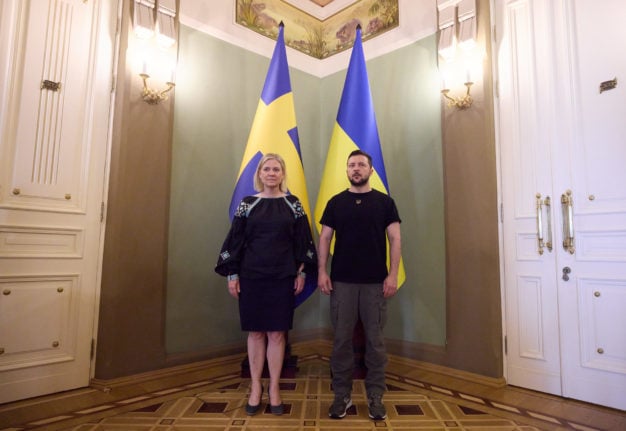 Foreign Minister Ann Linde and her Finnish counterpart Pekka Haavisto are in Brussels, where they are expected to hold a press conference with Nato Secretary General Jens Stoltenberg at lunchtime today.

Ambassadors of the 30 NATO member countries must have signed the Swedish and Finnish accession protocols, which now gives the two countries the status of “prospective members” – invitees, in Nato-speak.

This paves the way for the ratification process in which all Nato countries must approve accession in their respective parliaments, making Sweden and Finland full members of the military alliance.

Several countries, not least in the Nordic and Baltic countries, are expected to compete to be the first to ratify the new memberships.

At the same time, the question remains as to what Turkey will do – despite the agreement reached at the NATO summit in Madrid last week, when Turkey lifted its veto on starting the membership process. However, Turkey has clearly stated that it wants to see concrete action on the fight against terrorism, arms exports and extradition that the countries agreed on in Madrid.

“It has been important to go here to show the Swedish people’s support for Ukraine”, Sweden’s Prime Minister Magdalena Andersson said at a press conference. “Sweden will help rebuild Ukraine after the war, especially in matters of waste management and recycling in which Sweden’s knowledge can be useful.”

On the Ukrainian Ministry of Culture’s Twitter account, Andersson was seen walking among the ruins in the bombed-out cities of Bucha and Borodyanka.

“Sweden, together with others, will demand responsibility for the crimes committed and that those responsible will be brought to justice”, she says at a press conference via a link from the Presidential Palace in Kyiv. She also congratulated Zelensky on Ukraine becoming a candidate country for the EU.

Zelensky described Andersson’s first visit to Kyiv after the invasion as “very productive”.

“Thank you for your solidarity with Ukrainians and the support for our course towards a full accession to the EU in the future,” Zelenskyj wrote on social media.

The Liberals get 4.6 percent and thus climb over the parliamentary barrier for the first time in two years according to Swedish voter opinion compiled by Kantar Sifo, a Swedish company that conducts media and opinion polls.

The survey shows that the Social Democrats are also moving forward and end up at 32.9 percent, the highest figure since the 2014 election year.

The Green Party is also rising slightly, but with its 3.4 percent is still below the threshold for the parliament. At the same time, the Moderates have fallen by 1.7 percentage points to 19.5. The Sweden Democrats and the Center Party are also backing down a bit, while Christian Democrats and The Left party are increasing on the margin.

The leader of Sweden’s former communist Left Party has pledged not to support a Social Democrat-led government unless it bans profit-making in the school system and gives her party ministerial positions.

“The Left Party, is going, with the right election result, to work together with the other parties on the left to take its place in the government, and shoulder the burden of responsibility,” Nooshi Dadgostar declared in her speech on the main stage at the Almedalen festival.

The deal to end profit-making at Swedish schools would have to be agreed before her party would be willing to let Magdalena Andersson, Sweden’s prime minister, take up her position again in a parliamentary vote.

At a press conference earlier in the day, Dadgostar had announced a six-point plan to end profit-making in the Swedish school system.

The two new pledges, designed to show that her party could no longer be taken for granted, will cause headaches for the Social Democrats, as the Centre Party, their most likely coalition partner after the election, has over the past eight years refused to hold negotiations of any kind with the Left Party, let alone to rule alongside them in the same government.

No increased security threat after Copenhagen and Oslo shootings

The fatal shootings in a shopping centre in Copenhagen this weekend and on a bar street in Oslo last week do not mean an increased risk of fatal violence in Sweden, said Hampus Nygård, acting head of the police’s National Operations Department.

“It is not possible to give guarantees that this will not happen, but there will not automatically be a higher risk here that something will happen elsewhere. We are aware of the events and then make threat and risk analyses within the Police Authority, in collaboration with the Security Police,” Nygård said.

“Because the motives of those who commit lethal violence may differ, it is not possible to point out particularly risky places.’

Most of the police’s work against deadly violence is preventive. At the same time, Swedish police are trained and equipped to handle this type of incident, he said.

The latest act took place in a shopping centre outside Copenhagen on Sunday. At Westfield Mall of Scandinavia in Solna, they have increased preparedness after the fatal shooting, but for safety reasons do not want to comment on the routines.

President Joe Biden on Tuesday signed US ratification of bids by Finland and Sweden to enter Nato, taking expansion of the Western alliance in response to Russia’s Ukraine invasion one step closer.

Earlier this month, the Senate voted 95-1 in favor of the Nordic states’ accession, making the United States the 23rd of the 30 Nato countries to give formal endorsement. Unanimous support is needed for new membership.

Biden, who has made restoring traditional US alliances a cornerstone of his administration after Donald Trump’s move to upend ties around the world,
praised Nato as “the foundation of American security.”

The Liberal Party has called for children between the ages of two and five who are considered to have a low level of Swedish to be forced to attend pre-school or dagis, as the party announced its election manifesto on Tuesday.

Liberal leader Johan Pehrson said that all children who do not already attend pre-schools would be required to have their language ability assessed by their local primary health centre, and then be sent to special “language pre-schools” to speed up language development, if they have poor Swedish.

In the manifesto, the party reiterated its calls for 1,000 new special teachers, better conditions for teachers, and more order in the classroom.

Sweden’s green party is proposing that Sweden’s government pay 80 percent of the costs of installing air or groundwater heat pumps, and improving ventilation and isolation in people’s homes, as a way of reducing their energy costs this coming winter.

“The long-term solution for keeping down energy costs is for the state to help households reduce energy use now as much as possible,” he said. “If you succeed in putting in place these measures, then they won’t only have an impact this winter but in many future winters to come.”

The opposition Moderate Party has proposed that the government contribute towards households’ electricity bills this winter, as electricity prices are expected to rise.

The party is proposing a system of “high-cost protection” or högkostnadsskydd similar to that found in Norway, where the state will commit to covering a percentage of all costs over a certain figure.

It is not yet clear how the system would work, but the Moderates’ finance spokesperson, Elisabeth Svantesson, said it the government should set a price threshold, above which the government would shoulder the majority of any extra cost.

“You could expect the state to pay for 75 percent of the cost of everything over one krona per kilowatt hour,” she suggested, adding that a one krona threshold would cut around 6,000 kronor off the energy bill of an average family in Norrland.

“We can’t completely protect the consumer, but we can make it easier,” she said. “No one should be forced to leave their home this winter because of an electricity bill.”

Prime Minister Magdalena Andersson is open to the suggestion, stating that her party would “study the proposal very carefully”.