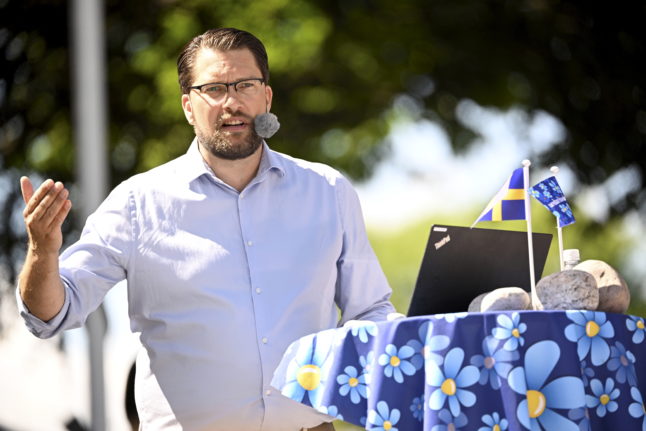 The Sweden Democrat leader began his speech with a fable about a woman, “we can call her Magdalena”, who desperately wants a job, but cannot account for what she has been doing for the past eight years, despite repeated questions from her interviewer.

In the end, the interviewer, red-faced with anger, snaps and bellows: “You’ve devoted yourself to throwing a whole country into chaos, and now you’ve got the gall to ask for another chance!”

In a sign that Sweden is about to have a so-called “pocketbook election”, focused on voters’ falling spending power, Åkesson followed the example of Christian Democrat leader Ebba Busch, who blamed Andersson for what she called Magdapriserna or “Magda prices”, but instead he dubbed the high prices “sossepriserna or “Social Democrat prices”.

“Are you sick of rampant power prices? Are you sick of shameless petrol prices? Sick of food getting more expensive? Then you should vote for the Sweden Democrats,” he declared, without giving any suggestions as to how his party would reduce them.

He cast scorn on Andersson’s attempt in her Almedalen speech to establish her party as the party of populism, with a lyrical account of her love of Swedish nature and cultural traits.

“With my hand on my heart, those who love Sweden would not accept this sort of reality,” he said, after running through a list of Sweden’s problems with crime and gang violence. “Anyone in power who loved Sweden would have done anything in their power to make it a good home for all citizens.

But while at times the speech attacked immigration, he also stated quite clearly that he was not against immigrants.

It’s not only for those born in Sweden, he said, that the country must be put right, but also for the “hundreds of thousands of diligent, hard-working and honourable immigrants”.

“It’s not about how you look, what skin colour you have, or where you were born,” he said. “Unlike the Left-wing focus on people’s appearance, I think it’s totally irrelevant. What matters is who is doing their best to contribute to our society, who does their duty, and who doesn’t. It’s about who is building cars, and who is burning cars.”

He mentions a man called Omar, who he said he had met in Järva, Northern Stockholm, and who had expressed is worries about the gangs that seek to control his area.

You can read the full speech here in Swedish or here in English (Google Translate).