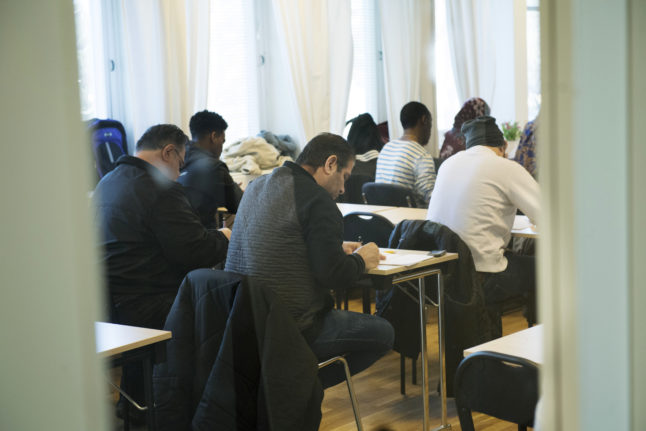 When Sweden’s government put its proposals for a language tests for citizenship out for consultation in early 2021, some of the key agencies responsible for running them refused to play ball. The Swedish National Agency for Education, who were to produce the tests, said they didn’t have the competence. The universities who were supposed to conduct them said this was in conflict with their remit. And the Language Council of Sweden, said the proposal clashed with Sweden’s language law.

A year and a half later, the government has yet to move the proposal on to the next stage, sending it on the Swedish Council on Legislation, indicating that it may be on the back burner. Instead, in June, the government proposed a less strenuous language test for permanent residency.

“I think they are leaving citizenship out of the question, because that had more to do also with symbolism, and since that was harder to do than anyone really foresaw, they decided on a different route where it’s more immigration-related,” said Sofia Tingsell, acting head of the Language Council of Sweden, who contributed to the original inquiry.
She said her agency had had serious questions about how language tests for citizenship might affect immigrants.
“We are afraid that it might become a discriminatory tool that actually eliminates people from the possibility of gaining a citizenship, even if they are invested in Sweden,” she said.

The inquiry into language tests for citizenship concluded that those applying should meet A2 level (the second lowest of six levels in the Common European Framework of Reference), for speaking and writing, and the higher B1 level for reading and listening.

Tingsell’s agency judged that this would represent a significant barrier for many immigrants.

“This would be an issue for people with short formal schooling, illiterate people, and also traumatised people,” she said, while pointing out that it was at the same time too low a level to ensure immigrants could easily operate in Swedish.

“The problem is when language is no longer considered a means of communication, but rather as something symbolic: if you speak Swedish you are almost essentialistically different. You belong,” she said. “There is nothing to say that someone who speaks quite poor Swedish couldn’t be very invested in democracy, or other things.”

While her agency accepted that people without adequate Swedish faced additional problems with integration, she said that experience showed that giving a cash incentive to those who are struggling did not make them more likely to develop their language skills.

When the Moderate-led Alliance government brought in an SFI bonus in 2009, paying people who finished their SFI courses quicker, they found it had little effect, removing the measure in 2013. Tingsell said that imposing a penalty, such as denying citizenship, was not likely to work either, as those who failed to learn Swedish did not do so by choice.

She said that the government’s inquiry into improving Swedish For Immigrants (SFI) teaching in Sweden had shown major shortcomings in the tuition, and that her agency believed the best way to improve the Swedish level among immigrants would be to make SFI more accessible, to have better designed courses, and better trained teachers.

She pointed to research by, among others the Australian linguist Ingrid Piller, which suggested that language learning among immigrants was often inhibited by contradictory demands.

The demand that new immigrants find work or meet a certain income requirement to bring over family often clashed with the demand that they learn the language, she said. There was also, she added, research that casts doubt on the idea that finding work automatically improves language skills and integration.

“They [immigrants] will obviously prioritise getting a job and getting enough money over learning the language,” she said. “And usually [if you don’t speak the language], then you get a job in a sector like cleaning or delivery or storage, where you don’t get to practice a lot of Swedish. That’s the point: you can work without speaking. And because it’s a low income job, you have to work quite a lot, so then you can’t go to SFI. You drop out out of necessity.”

The idea that once immigrants get a job, they will get Swedish colleagues and learn Swedish was largely “a myth”, she said, because without speaking Swedish, most immigrants didn’t get that kind of job.
When it set the framework for the the inquiry into a language requirement for permanent residency, the government called for Fredrik Fries, the judge tasked with leading it, to look for a “simpler system” for language tests for permanent residency than that which was proposed for citizenship, which it noted needed “careful analysis”, and also  “comprehensive preparations” with the relevant agencies.
The inquiry has yet to even begin its work, but Tingsell said that rather than requiring an additional test, it might end up concluding that it would be easier to simply require those seeking permanent residency to have completed SFI to a certain level and to have taken the existing national tests.
“That would be simple enough, because most people that come to Sweden do actually finish some level of SFI, and I suppose that this might encourage more people to stay in the course. But it still won’t help if you’re illiterate, right? Because that’s not a choice. Not everyone can just pull themselves together.”