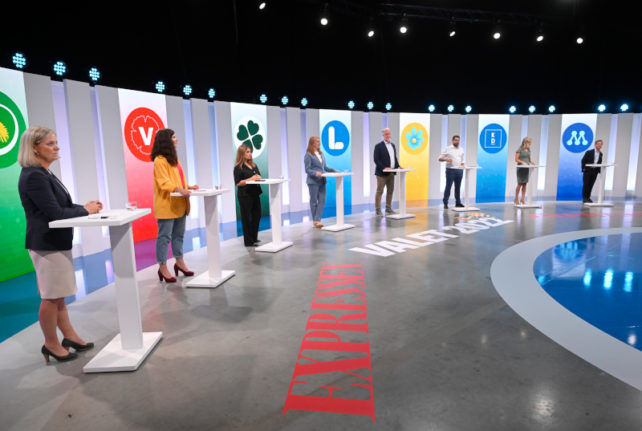 The Swedish election is heating up. Photo: Fredrik Sandberg/TT

It’s been an eventful week, and it’s clear that the election is drawing closer.

If you’ve been in Sweden long enough, you may remember when public broadcaster SVT just four days before the 2002 election visited campaign tents with a hidden camera and caught in particular representatives of the Moderates saying extremely racist things. The conservative party as a result plummeted in the polls and had their worst election in decades.

Similar political dynamite was produced by investigative reporters at broadcaster TV4’s show Kalla Fakta last week, who, with the help of businessmen, called each of Sweden’s eight parties, pretending to want to circumvent funding rules to donate half a million kronor anonymously.

Swedish law states that anonymous donations to political parties are only allowed if the donation does not exceed 24,150 kronor (€2,281), but only three parties (Left, Green and Centre) told Kalla Fakta’s undercover team that it wasn’t possible for them to remain anonymous. The rest of them (Social Democrats, Liberals, Moderates, Christian Democrats, Sweden Democrats) suggested different ways of getting around the requirements.

The parties are now in damage control mode. The Social Democrats have already removed their head of finance from her post, the Liberals also let their representative go after initially trying to deny what had happened.

It’s too early to say whether this scandal – and it’s seen as a massive scandal – will affect the outcome of the election, but it’s certainly sparked debate in a country that usually ranks well in anti-corruption surveys.

Whoever wins the election will have a big job ahead of them trying to cobble together a viable coalition government. The Centre Party’s Annie Lööf has now firmly, and unsurprisingly, aligned herself with the centre-left bloc, telling the Dagens Nyheter newspaper she would consider ministerial roles for the party in a Social Democrat-led government.

The Centre Party and the Liberals are Sweden’s two small, centrist-liberal parties, but they parted ways this year with the former supporting the left bloc and the latter joining the Moderates, Christian Democrats and anti-immigration Sweden Democrats on the right. Both moves are tactically risky, as the left wing’s state-controlled welfare system is anathema to the Centre Party’s free market voters, and the Liberals risk losing voters who can’t bear their new friendliness with the Sweden Democrats.

It was therefore clever of Lööf to link her support for the Social Democrats not to the party itself, but to Prime Minister Magdalena Andersson, whose popularity vastly overshadows that of opposition leader Ulf Kristersson.

“I believe Magdalena Andersson has the leadership needed,” she said.

The Centre Party still, however, balks at the notion of taking part in any organised negotiations with the Left Party, whose support Andersson is also likely to need if she were to form a government after the election.

I wouldn’t be altogether surprised if Sweden ends up with a Social Democrat minority government again, with Andersson acting as the go-between; the Left Party talks to her, she talks to the Centre Party, and neither of those two parties actually have to talk to each other. But don’t quote me on that, because this election race could still go anywhere!

Who’s in the lead?

Where are we at in the polls? According to “the poll of polls” by election researchers at Gothenburg University, based on the latest surveys by five of Sweden’s main pollsters, the left bloc is currently polling at 49.4 percent and the right bloc at 48.8 percent (with the Green Party on the left and the Liberals on the right both polling above the parliamentary threshold).

Also in the world of Swedish politics, Sweden Democrat leader Jimmie Åkesson spoke to The Local about his preferred work permit rules (a departure from the party’s current stance), public broadcaster SVT revealed how much the parties are spending on their election campaigns, Moderate leader Ulf Kristersson (who was voted the winner of Aftonbladet’s party leader debate last week) told DN he wants to give the Sweden Democrats “serious influence” in post-election negotiations, and the Green Party wants all public buildings to install solar panels in order to bring energy prices down.

Last week was also the week when the rhetoric on immigration was taken to a new level. My colleagues at The Local spoke about the parties’ immigration and integration plans in the latest episode of our Sweden in Focus podcast – I recommend giving it a listen, it’s a great episode.

Enjoy, and never say Swedish politicians don’t know how to have fun.