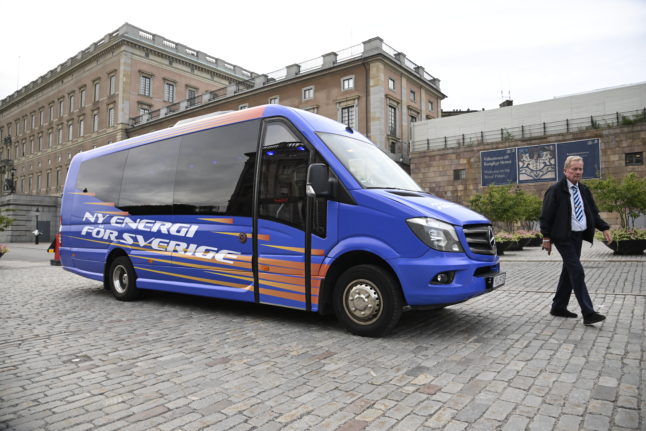 The opposition parties' bus which will be visiting nuclear power stations over the next week. The text reads "New energy for Sweden!" Photo: Anders Wiklund/TT

Liberal Party press secretary Axel Mårtensen said that that was always the plan, telling TT newswire that the party has not planned any other related activities in advance.

The prospect of the Liberal Party going on tour with the Sweden Democrats has raised eyebrows within the Liberal Party, with leadership branding it a “study trip” and Liberal MP Arman Teimouri stressing the fact that it’s not part of a joint election tour.

The Sweden Democrats seem to have another view on the matter.

“They can define their business how they want,” Mattias Bäckström Johansson, the Sweden Democrats’ energy spokesperson, told TT.

“For us, it’s obvious that when we’ve decorated a bus, have flyers and shared campaign activities planned in advance, then it’s some form of campaign.”

The Sweden Democrats’ official Twitter account tweeted an image of the bus alongside all four parties’ logos, with the text “The winning bus is heading towards an election win! The campaign starts today!”

Christian Democrat spokesperson Camilla Brodin said it was about showing four parties who agree on energy policy, in contrast to the left bloc made up by the Social Democrats, the Left Party, the Centre Party and the Greens.

That’s emphasised with a specially decorated bus with the motto “New Energy for Sweden” across the front and sides.

“We’re visiting nuclear power stations, we’re making other stops as well, as election campaigns are ongoing,” Brodin said. “We’re four parties who want to engage our own members to spread the message that Sweden needs a new government.”