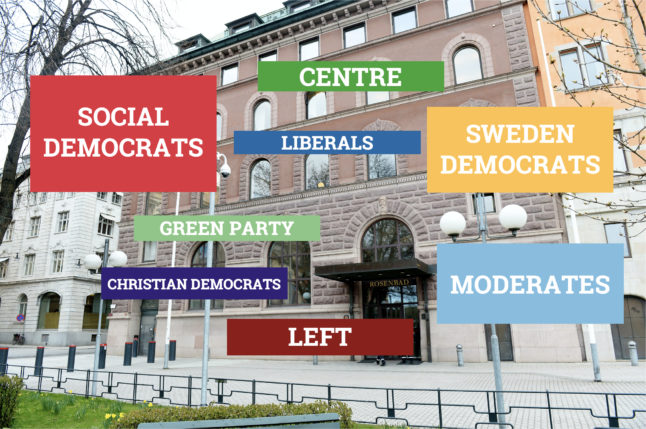 “There are two questions here,” Nicholas Aylott, Associate Professor at Stockholm’s Södertörn University says of the predicted election result when we speak to him a few days before the election.

“First, which bloc wins? Before this election, the eight parties in parliament have more or less sorted themselves into two blocs, one on the left, one on the right. One of these blocs will win a parliamentary majority”.

“But then there’s the next question: which parties within the winning bloc will actually join the government, and which will support the government in parliament without participating in it?”

The parties’ blocks below are sorted by colour and rough size of vote share. 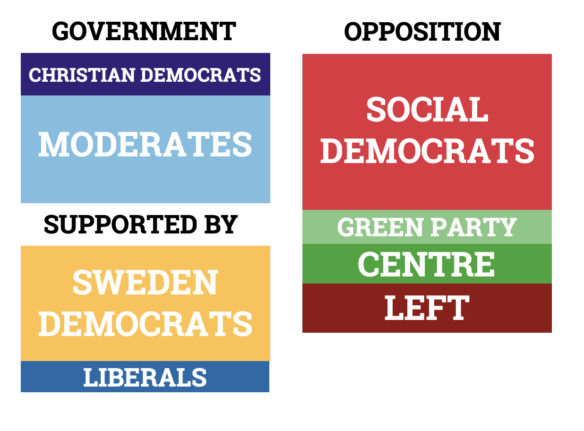 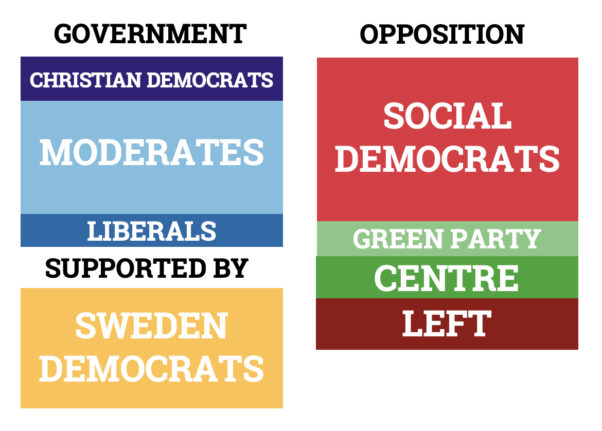 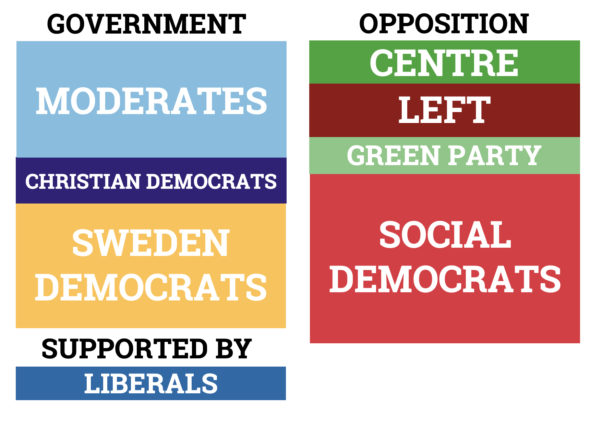 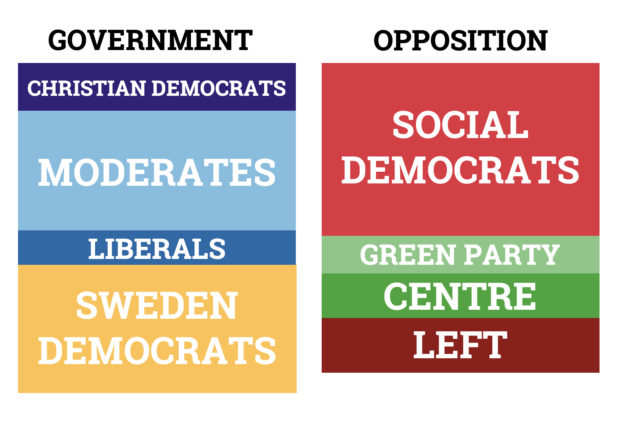 Graphic: Becky Waterton/The Local
This is another possibility if the right-wing bloc form a government, although the Moderates and the Christian Democrats have both said they won’t accept the Sweden Democrats in government. It’s also unlikely that the Liberals would be in such a government, although not impossible.
If the right-wing parties win the election, this is likely to be their only chance of forming a majority government.
Again, this government could see issues arising between all four governmental parties who would need to make substantial compromises in order to reach an agreement on policy. Economic policy in particular could be a real issue here, so it depends how willing the Sweden Democrats are to move to the right on economic issues in order to push through their immigration policy.
The Liberals are also closer to the centre than the Moderates and Christian Democrats, adding another layer of complication into the mix – although as the smallest party, they will have less power to negotiate than the Sweden Democrats.
LEFT BLOC 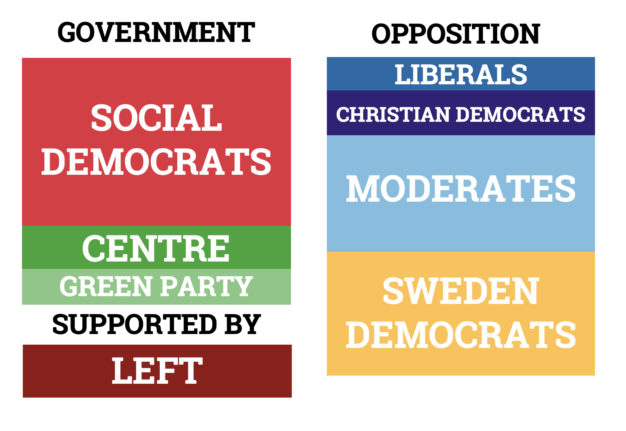 Graphic: Becky Waterton/The Local
The Social Democrats are also campaigning on a pledge to stop state-funded free schools from withdrawing profits for their owners, something the Centre Party is strongly opposed to. The two parties also have opposing policies on tax. These differences should be surmountable, however, with Aylott seeing the greatest obstacle being between the Left and Centre Parties.
“Unlikely,” is his final verdict. “The Left has said that it wouldn’t accept being the only member of a left-wing majority that is not included in the government. But it’s very hard to see how the Centre Party could live with the Left Party’s inclusion.”.
Given sufficient concessions, and in a situation where the only alternative is a right-wing government backed by the Sweden Democrats, could the Left Party back down?
This constellation would be a minority government, with the support of the Left Party likely to bring it only a few mandates into a majority.

This is the makeup of Sweden’s current government, where the Social Democrats have a one-party minority government supported by the Greens, Centre and Left. The government would be weak and forced to negotiate with multiple parties in parliament in order to pass legislation.

This for Aylott is the most likely government if the left bloc wins. “The Left and Centre parties would probably keep each other out of government. Meanwhile, it’s not certain that the Greens would want to shoulder the burden of office again, which previously cost them votes. It might well suit both them and the Social Democrats if the latter governed alone, as now.”

If the Greens were to join, which Aylott thinks is “possible”, the government would be slightly stronger, but still reliant on negotiating with other parties to secure a majority.

“This would be a reheated version of the 2019 January agreement (except without the Liberals),” he continues. “Both the Left and the Centre parties would grumble. Still, if the other is also excluded, each of them could probably put up with it. But would the Greens want to be in government? Would they be wanted?”

The last Social Democrat-Green government didn’t end well, after all. Newly-elected prime minister Magdalena Andersson ended up resigning just a few hours after she was appointed once the Greens pulled out of the government over having to rule on a right-wing budget. 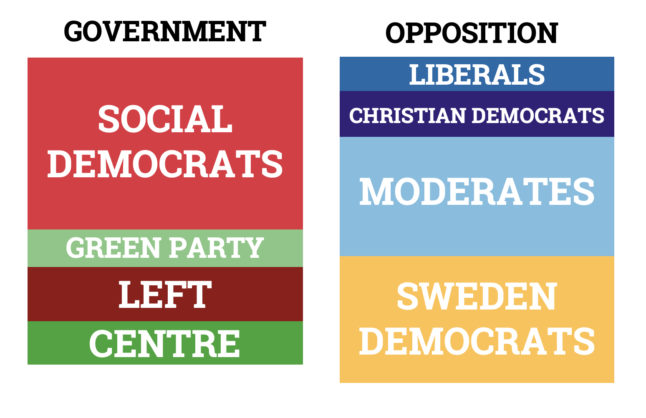 Graphic: Becky Waterton/The Local
Another possible constellation could see the Left Party included in the government, rather than staying outside in a supporting role. This is perhaps the left bloc’s best hope of forming a majority government.
The only way this could happen is if Nooshi Dadgostar or Annie Lööf made enormous policy concessions. Would Dadgostar be willing to serve in an economically centrist, or even economically centre-right, government if her party got ministerial positions. Would Annie Lööf be willing to service in an economically left-wing one?
Social Democrats, Centre, Greens and Liberals 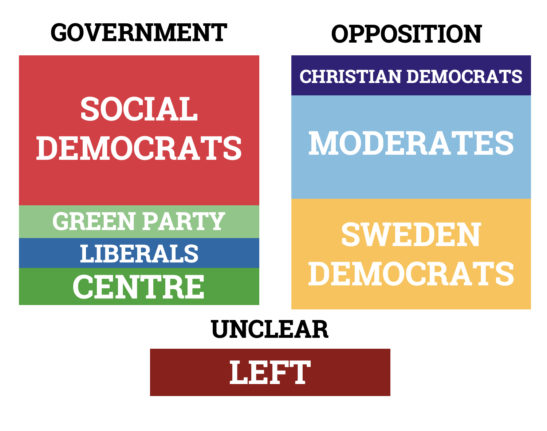 Graphic: Becky Waterton/The Local
This was the basis of the January Agreement, an agreement between these four parties which supported a Social Democrat-Green government under
Stefan Löfven between January 2019 and July 2021.
The Liberals have since then swapped sides and joined the right-wing bloc, and the party’s leader, Johan Pehrson, has repeatedly expressed his support for a change in Sweden’s leadership, making it extremely unlikely the party will reverse course.
“No,” is Aylott’s verdict. “It’s a cliché that to be Liberal is to be conflicted. But you can only take being conflicted so far. They switched from the right bloc to the left one in 2019. Then they switched back to the right one in 2021. To switch back leftwards again would take internal stress beyond any bearable limit.”
Could the populist Sweden Democrats make such extreme demands on a future Moderate-led government that the Liberals are absolutely forced to change sides?
A ‘grand coalition’ 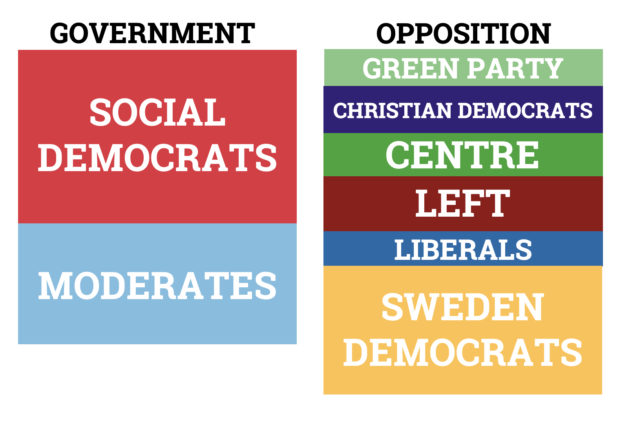 Graphic: Becky Waterton/The Local
An extremely unlikely government, this would see the Social Democrats and the Moderates unite to form a government together. If this were to happen, it is likely to be in a situation where all other options had been exhausted, or a situation where the country is facing some sort of crisis.
Grand coalitions have been formed before elsewhere, although not in Sweden. They usually occur when countries are facing war, recession, or other major events where politicians decide to put aside their ideological differences in favour of stability and unity.
The Social Democrats and Moderates are and have always been rivals, and the fear for both of them in joining this coalition would be losing a share of the vote if their core voters felt disappointed in them crossing the divide and working together. Outside of a crisis, both parties would probably prefer to be in opposition.
Such a coalition would probably draw in the Green Party, the Centre Party and the Liberals to form a majority government.
“If such an agreement did happen, it would mark the victory of the Centre Party’s long campaign against bloc politics,” Aylott says, rating this constellation unlikely. “Neither the Social Democrats and the Moderates seem remotely inclined to take the major risks that a grand coalition would entail.”