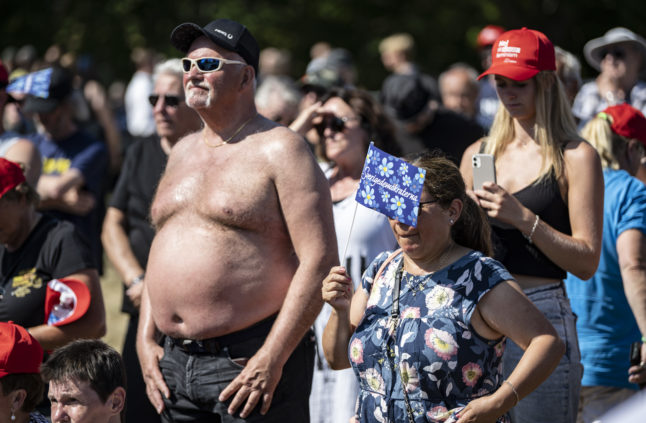 The far-right party is the unquestioned winner in the 2022 election, winning the votes of more than a fifth of all Swedish citizens, and overtaking the Moderate Party as the country’s second-largest party.  So where did all the votes come from?

The party seems to have grown its share of the vote in every municipality in Sweden, apart from Malmö, Övertorneå, Lund, and Landskrona.

The party retained its dominance in Skåne, its traditional homeland, winning the most parliamentary votes in 23 of the county’s 33 districts.

In the four municipalities that it already controls, Sölvesborg in Blekinge, and Hörby, Bjuv, and Svälöv in Skåne, the party grew its vote share by 10 percent, 4 percent, 6 percent, and 3.8 percent respectively. The party appears to have largely proved those who predicted chaos and scandal in the towns where it seized control in 2018 to be wrong.

I prefer this color scheme. There was a surprising S sweep in basically every other region though. pic.twitter.com/vseVnlsSi7

Which parties did the Sweden Democrats get their votes from?

According to the opinion survey carried out for SVT at polling stations, the party gained the most new votes from the Moderate Party, followed by the Social Democrats. This would indicate that the strategy pursued by both parties, but particularly by the Moderates, of adopting some of the Sweden Democrats’ tough rhetoric on immigration and crime, has not, as some hoped, won back voters from the party, but instead had the opposite effect.

The Sweden Democrats got almost all of their new voters from the Moderates and the Social Democrats, indicating that the strategy of aping far-right rhetoric on crime and immigration (so successful for the Social Democrats and Liberals in Denmark) has failed in Sweden. pic.twitter.com/0iG7oLRTNq

Which social classes did the party most appeal to?

One of the party’s most striking achievements in the election has been managing to take a significant share of the vote in almost all classes, and amongst almost all types of worker.

It was only among white-collar workers, or tjänstemän, that the party made less of an impact, coming third with 15 percent of the vote, behind the Social Democrats on 32 percent and the Moderates on 22 percent. 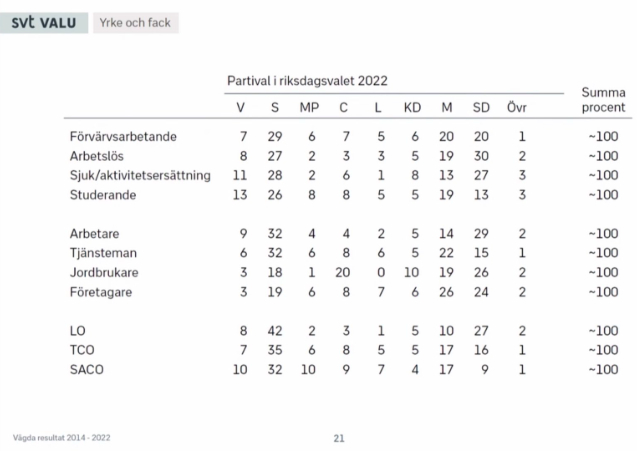