IKEA justified the price increase with the fact that the company’s vegetarian alternative should be cheaper than the standard meat-based sausage for climate reasons.

They planned to reduce the price of vegetarian sausages at the flat-pack furniture chain by 50 percent, from 10 kronor to just 5.

Now, the company has announced that they will not increase the price of the meat sausage, with both sausages costing 5 kronor, vegetarian or otherwise.

“A sausage is a sausage, no matter its form,” the company wrote in a statement.

When asked how he thought customers may respond to the decision, he said that he “can imagine that it might stir up some feelings, but we hope for a positive reaction”.

Competitor Biltema, which specialises in tools and car supplies and is also known for its 5 kronor hotdog, responded to IKEA’s price hike plans with its own campaign, featuring a Biltema hotdog, a 5 kronor price tag, and the text “why pay more?”

“We’ve seen our competitors have increased the price for a classic hotdog in a bun,” head of marketing at Biltema Sweden, Johan Gerdevåg, said.
“But for us at Biltema, it’s obvious that we shouldn’t change the price of our classic.”
“Everyone should have the possibility to enjoy a hotdog without it costing a fortune,” he said. 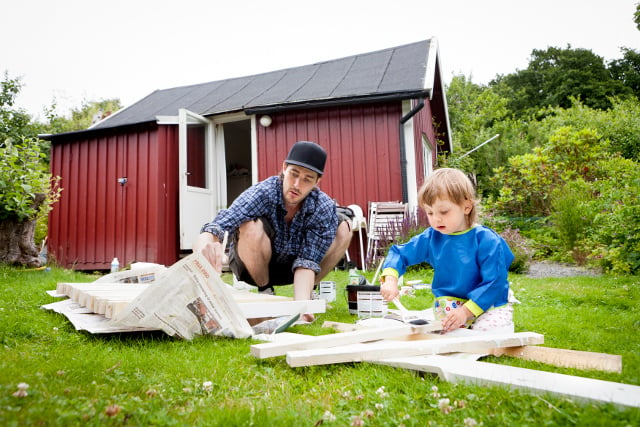 Sweden is trending right now, with cultural concepts such as “lagom” (just enough) and “fika” (coffee break) selling everything from books to fashion. The nation is often seen as a social democratic model country, where people are egalitarian, wealthy and happy. As Ingvar Kamprad, the founder of the Swedish multinational furniture retailer Ikea, recently passed away, it is interesting to reflect on how he and Ikea may have contributed to exporting this image.

Take a look in any Ikea shop and you'll notice you are surrounded with Swedishness. The logo is in the colours of the Swedish flag. The pieces of furniture all have Swedish names and the canteen boasts a number of Swedish delicacies. But the company also sells more subtle narratives about Sweden.

In fact, for almost three decades Ikea has strategically commodified Swedish cultural concepts, symbols and political ideas and exported them across the world. “To visit Ikea is to visit Sweden,” as a former director general of the Swedish Institute, the government agency for the promotion of Sweden, once stated.

Kamprad was a contradictory character – frugal, friendly and modest but also an alcoholic with past links to fascism. While we can't know exactly what his legacy will be, the myth surrounding him has secured him immortal fame in Sweden, where he started his business in the mid-20th century. His early life is portrayed by Ikea as years of hardship circumvented by the innovation of a thrifty boy. He is forever engraved in the company's name, which is composed by Kamprad's initials (“IK”) and the first letters of the remote farm (Elmtaryd) and the small village where he grew up (Agunnaryd).

Many Swedes are proud of Ikea, which currently has 300 stores in 38 countries. Like a number of other companies, Ikea uses Swedish culture as part of its marketing strategy. The company tells stories about Sweden that Swedes as well as non-Swedes recognise and identify with.

The story of Kamprad is even told on the official website of Sweden to promote the image of the country internationally. Ikea here becomes a symbol of what political scientist Benedict Anderson called an “imagined community”, referring to nations as collective social constructions situated in particular histories and geographies.

The story of Kamprad as a self-made businessman fits the image of Sweden as an entrepreneurial nation in a new economy focused on innovation and small, knowledge intensive firms.

The story is quite conventional and follows the universal storytelling pattern of the “monomyth” in narrative mythology, in which a hero reluctantly sets out on an adventure and is forced to go through a series of trials before he can return home with the sacred objects. A central theme in the story of Kamprad, as Ikea tells it, is that of the heroic entrepreneur who overcomes obstacles posed by the market through hard work. The theme of hard work underpins a crucial aspect of Ikea's business model: the DIY concept. Every time a consumer enters into an Ikea shop, she or he enacts the hero's journey by way of collecting, carrying, transporting and assembling furniture and products. By putting the consumer to work in the shop, Ikea also underscores an important characteristic of the highly secularised albeit Protestant Swedish culture, namely that one needs to deserve achievements: success relies on frugality. In assembling the furniture by hand, the consumer partakes in a kind of ritual celebration of hard work.

Ikea's take on DIY and selling affordable products to the masses are also linked to yet another well-known concept in Swedish culture, “Folkhemmet”, which literally means the “home of the people”. This was a social democratic political vision of the good society – in which everyone is treated as an equal and has access to general welfare.

Ikea has been pushing the concepts of lagom and fika, which now have become trends, for a long time. The cinnamon buns and small cups of brewed coffee that are a staple of fika have always been offered in the canteen. Nowadays, fika is promoted as being part of the Swedish cuisine and lifestyle by a range of different actors. Lagom is an important concept in Swedish culture and it's closely tied to something called “jantelagen”, which is an unwritten law that means that people should never consider themselves superior to others. The myth of Kamprad's humble, frugal lifestyle exploits this particular outlook to further link Ikea to Swedish culture.

It is also promoted as part of the company culture. While Ikea is rumoured to give employees a Christmas bonus, it does not allow business class travel and excessive company parties. Recently, the company also launched the “LAGOM project“, which aims to help consumers to live more sustainably.

No room for feminism?

Ikea strategically exports Swedish values to create a certain image of Sweden. The fact that the Swedish government also promotes these values to market the country shows how powerful it has been. But in painting this picture, Ikea has also left out other values which are equally important to what it means to be Swedish, giving a skewed image.

One example is Swedish feminism. The current Swedish government has declared itself as the first feminist government in the world. More recently, the #metoo campaign was turned into a powerful movement in Sweden, which enabled women across different professions to speak with a collective voice about harassment in the workplace.

It remains an open question whether and how feminism will be treated in the promotion of Sweden and Ikea. Last year, despite its Swedish origins, Ikea had to apologize for and withdraw a sexist advertisement in China.

Ikea may strategically use Sweden in its communication efforts, but the relationship is not always symbiotic.