“The ban has been longed-awaited from both sides,” says environmental inspector Åse Thorné.

According to a Temo survey, eight of ten Swedes are not planning to change their restaurant visiting habits because of the ban after the 1st of June and two out of ten said they will visit restaurants more often. Only three percent of the respondents said they anticipated visiting restaurants less after the ban, reported Dagens Nyheter.

On the other hand, a restaurant owner who spoke to TT said he thinks people will be making a dash for the street more than before. But the great unknown facing the restaurateurs is the likely impact on takings.

“We don’t know what will happen with the turnover. We have to look after the smokers so they feel welcome as well,” said Fredrik Norberg, restaurant manager at Sturehof in Stockholm.

Leif Rönngren, social-democrat vice-mayor in Stockholm told TT that, despite rumours to the contrary, it will be possible to apply for a permit for outdoor service for the entire year.

Indra Bowen smoking one of the last legal pavement cigarettes. Photo: Stina Gullander/TT
This article is available to Members of The Local. Read more about Membership here.

The new stricter smoking ban, which came into force on Monday morning, extends even to e-cigarettes.

But Stockholm City said it was planning to defy the ban, allowing three well-known outdoor bars to continue offering an outdoor 'smoking room'.
“From a political point of view with have asked our officials to take a pragmatic view over outdoor 'smoking rooms' for smokers, and we are ready stand firm on that decision if it gets tested in court,” Jan Jönsson, a Liberal councillor on Stockholm City council, told the Dagens Nyheter newspaper.
At least three restaurants, Trädgården at Skanstull, Slakthuset, and the Mosebacke terrace at Södra Teater in Södermalm plan to offer an outdoor 'smoking room', with the city government's support.
The law allows restaurants to have sealed-off smoking sections, but customers are not allowed to bring their drinks there or consume food, and as the areas are supposed to be sealed off, it remains to be seen if Sweden's national authorities accept these restaurants' plans.
Other cities are already taking action, with Malmö setting up strategic “Fimpzoner” or “Stub Out Zones” in three places, including the cobbled Lilla Torget square, which is known for its outdoor restaurants.
“As far as I know Malmö is the first in Sweden to have this sort of solution with Stub Out Zones in public places,” Sverker Haraldsson, project leader in the city's housing and traffic department, said in a statement. One of the new 'Stub Out Zones' in Malmö's Lilla Torg square. Photo: Malmö Stad
As well as pavement cafés, the new law also extends the ban on smoking in public places to places used for sports, such as football pitches.
It also bans smoking at bus stops and playgrounds. 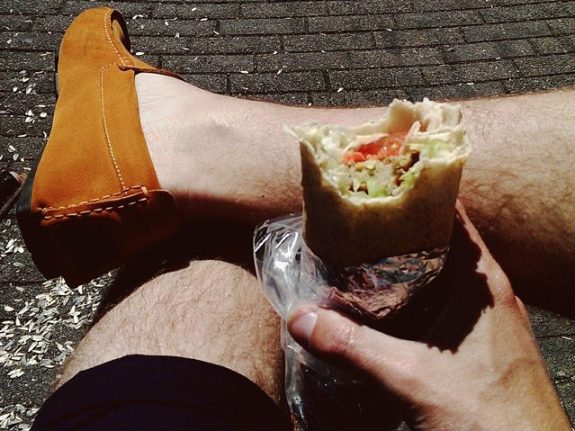 RESTAURANTS
Expats decide: These are the best falafel joints in Malmö