The Skop Voter Barometer published on Thursday showed that the Social Democrats were still the most popular party, favoured by 33.2 percent of those polled. This was down from 34 percent in June.

The results showed that the conservative Moderate Party had gained three points since the last Skop poll in June. This left it on 27 percent, six points behind the Social Democrats.

Yet if the results of the poll were repeated in a general election, Moderate leader Fredrik Reinfeldt would still most likely become prime minister, as the overall performance of the centre-right Alliance leaves the parties with a combined lead of nearly 10 percent over the Social Democrats and its partners in the Green and Left parties.

The Centre Party, part of the alliance, saw its share of the vote rise to 7.5 percent, and the Christian Democrats’ popularity also rose somewhat, although they remain the smallest party. Only the Liberal Party saw its share decrease – it was down 1.4 points to 11.6 percent.

Among the Social Democrats’ partners there was little cause for celebration. Support for the Left Party was down to 5.8 percent and the Green Party saw its figures unchanged on 5.3 percent. 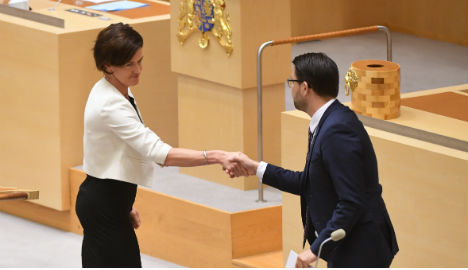