I tell her that if all she wanted was the sound of tapping then she should have married a woodpecker.

It’s not that my lack of typing implies a lack of productivity, she responds – she just thinks I need the exercise.

And so the fun chez Syndrome goes on, until Mrs S points out the blindingly obvious fact that I Need To Get Out More.

I know, I know, I say. And what better time of the year to get out than now, just before Christmas, when, every evening, Stockholm’s icy streets are warmed by the glow of a hundred networking events.

Stockholm is a city of fads, so much so that multinational corporations routinely test their products here, knowing that if they don’t take off in Stockholm, they won’t take off anywhere.

But not since Rubik’s Cube has there been a fad more irritating, time-consuming and ultimately pointless than networking.

Looking for a job? You need to network. Not reaching your sales targets? Get networking. Need staff? Use your network.

As far as I’m concerned, networking is notworking. But nowadays, for ambitious Stockholmers, it is everything.

Networking experts are popping up all over the place, organising events, spreading business cards like reverse pickpockets, bringing people together. And it was at just such an occasion that I found myself on Monday night.

I was slightly peeved from the off, since it clashed with my Swedish class Christmas meal. My heart sank further as I arrived at the fancy bar where the event was being held. I downed a glass of glögg and steeled myself.

After the welcome speech from the host, who took the opportunity to plug her life coaching services, the circulation began.

And everyone pretends they know everyone else. Everyone smiles more broadly than is natural, talks more loudly than is polite and shakes hands more vigorously than is healthy.

A genuine conversation is impossible when all you’re trying to do is work out if you can sell to or work for the person you’re talking to – especially when they’re doing the same. And when you both realise that there’s nothing doing, it’s a race to see who can get away first.

Perhaps I’ve just been embittered by my failure to achieve anything useful by networking. I have never left a networking event with a useful contact. I’ve never even been a useful contact for someone who met me at an event.

Maybe it’s my own fault. Maybe I should spend more time talking to the networkers rather than the lad taking coats or the girl serving nibbles. Maybe I put people off with my grumpy attitude towards the whole shebang.

But I don’t think so. Because when I mention this to people who move in similar circles – albeit carefully, with one hand clutching a glass of house white and the other smarting from a robust shaking – they quietly agree. With some relief, I’ve noticed, they admit that it’s just something they do because, well, you know, you have to these days, don’t you?

You have to hand it to the networking event organisers. What they’ve done is as clever as putting water in bottles and selling it for 17 kronor apiece. Except what they’ve packaged is what the rest of us would call ‘talking to people’.

And in Stockholm they have the perfect market. Quite apart from the city’s trend addiction, Swedes, as we all know, are not the most gregarious of people. So a structured two hour session, where it’s OK to start a conversation with someone you don’t know, is perfect.

As soon as I could I ducked out of the throng and made my way to the restaurant where our class was meeting for a Christmas meal. Dashing across Kungsträdgården I reflected on what a relief it would be just to sit down with some nice people for a normal chat after so much marketingspeak and self-promotion.

It turned out that most of the class had failed to show. Stefan, our former teacher, was there and he said this is normal. Garry, the American PhD student had cornered Rositza, our current Bulgarian Swedish teacher. Clearly I wasn’t welcome there.

At the other end of the table, Russian Gregor, Greek Theo and Cuban Bobby were deep in conversation. Theo, apparently forgetting Sweden’s ban on smoking in restaurants had brought along a fat cigar, which he fondled, unlit.

The others looked up and Gregor shifted over so I could squeeze in. Theo had already resumed his conspiratorial discussion with Bobby.

There is no escape. Happy Christmas!

Stockholm Syndrome will be back in the New Year. 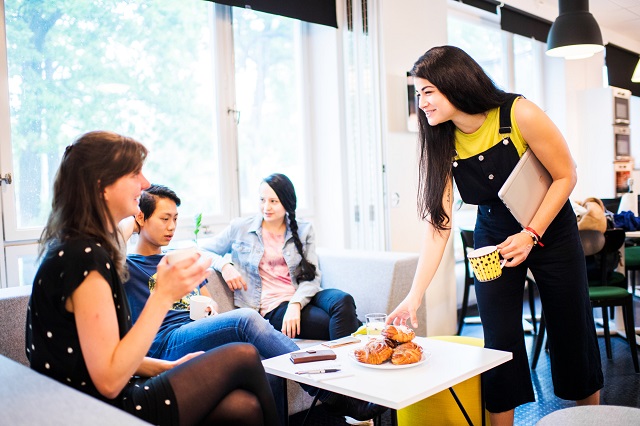 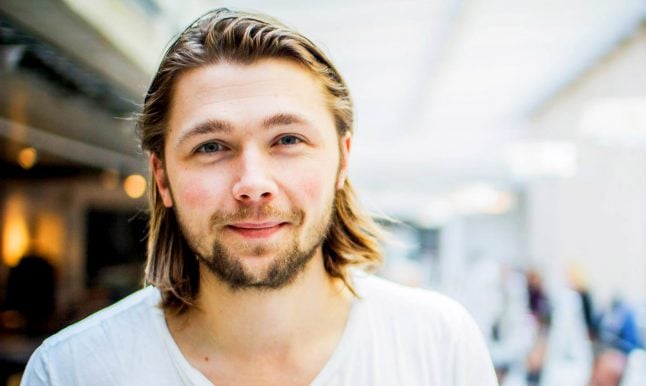 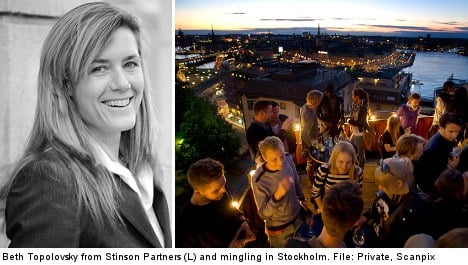 Topolovsky is a management consultant at Stinson Partners, which specializes in corporate renewals. As an American living in Sweden, she gave us her view on the differences in networking between the two countries.

Do Swedes have a solid culture of networking?

I get the sense that networking is somewhat new in Sweden. Possibly, people used to rely on being introduced by a mutual friend or colleague, instead of extending a hand at an event to meet someone.

In my experience, however, once you’re talking, Swedes can easily chat about their work, and they do it in a very neutral and forthcoming way.

Americans, meanwhile, tend to tell you everything they’ve ever accomplished at their job – in the first five sentences – which is a bit embarrassing to us Americans who’ve lived abroad for a while.

So if you’re fresh off the plane, what do you have to keep in mind?

My recommendations for an American who’s just moved to Sweden are to keep it a bit low key compared to the US. Swedes need a bit more time to get to know you before opening up, whereas Americans tend to be very friendly in the first meeting. This puts Swedes off just a bit, so take it a bit slower.

Are you planning on moving to Sweden for a job but haven’t found a place to live yet? Check out the latest home listings in The Local’s Property Section

Also, be mindful of talking about money or status jobs when meeting someone here. It’s not politically correct to ask questions that might lead you to learn a person’s earnings or how high up in an organization they are. Those types of inquiries are very rude.

You are supposed to view people as equals and find everyone as valuable to speak with, not just the top bosses.

Most importantly for Americans to remember is to not oversell yourself. Just have a normal conversation without finding openings to showcase all your achievements. Swedes will automatically think you have low self-esteem if you carry on like that, as if you have something to hide, so you need to boast about something.

In the US, we’re raised to sell ourselves, to define who we are by our accomplishments. It’s just the opposite here. Be cool, and remember, humility is highly admired in Sweden.

A side tip for women: Don’t overdress, especially with the bling jewellery. That’s tacky here and again, actually sends the opposite message that you don’t have a lot of self confidence.

What are things to keep in mind? Are there any absolute no-nos?

It is most important to understand your company’s policies on proprietary information, and you must respect them above all. If in doubt when a potentially sensitive topic comes up, be vague or don’t say anything at all.

ALSO READ: Camilla Öngörur, co-founder of Swedish networking organization Give It Forward, shares her insight into how to network, formally and informally.

Secondly, I think it’s important not to speak negatively about anyone. It’s not good practice in general and only leaves a negative charge in the air.

What you must do? Exchange cards. Always, always, always have your cards with you, in your wallet, in your computer bag… everywhere.

And once you’ve met and exchanged business cards (visitkort)?

Only send emails afterwards if you’ve really made a connection and you see there might be some future business. Otherwise, those emails become insignificant and just become administrative work for both parties.

Network as much as you feel comfortable with, but push yourself a bit beyond your comfort zone. Ninety percent of jobs come from people you know or whom you’ve met, not from sitting in front of your computer.

Practice. Practice walking up to someone and extending your hand for a handshake. Practice a good introduction line – without being corny like “Do you come here often?”.

Learn how to cut off conversations in a graceful way. It’s so much nicer to pardon yourself to make a scheduled call, rather than be clumsy and just walk off. 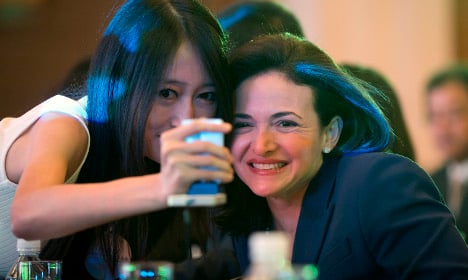 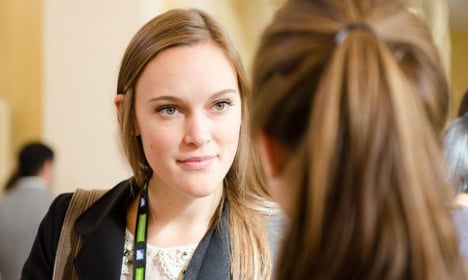