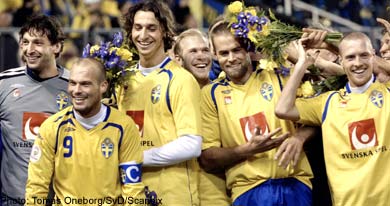 The win put Sweden through as runners up behind Group F winners Spain, 1-0 winners over Northern Ireland in Las Palmas.

It was no easy victory for the boys in blue and yellow at Stockholm’s Råsunda Stadium on Wednesday.

Marcus Allbäck put Sweden ahead after just 34 seconds on the back of a cross from Zlatan Ibrahimovic, but it took just 25 minutes for the Baltic team to put some excitement back in the game, when a shot from Jurijs Laizan from just outside the penalty area paid off.

Laizan’s goal put the pressure on Sweden, but the home team came back after the half time break and re-established control of the match. Kim Källström cashed in Sweden’s advantage in the 57th minute with a left-footer from twenty metres, making it 2-1 for the Scandinavians.

Coach Lars Lagerbäck professed himself delighted after it was confirmed that Sweden would be heading to the finals.

“It feels wonderful to win on home turf and to go through under our own steam,” he told TV3.

The draw for the group stages at next year’s finals will be made at UEFA’s headquarters in Luzern, Switzerland, on December 2.