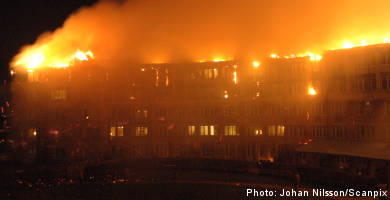 The fire broke out at 11pm on Monday in an apartment on the top floor of the five storey building in Limhamn and quickly spread to the attic.

Emergency services spent all night trying to bring the fire under control. By 7am fire fighters were still having to deal with isolated fires on the outside of the building.

Emergency workers expect to remain at the scene for much of Tuesday.

There have been no reports of any injuries among the 70 inhabitants evacuated from the building.